Eagle One
Airman (by Oz)
Flyboy

"Been watching you for a long time. Atlas did a real number on your heads, didn't they? Nothing personal... but one of you has to go."
— Lennox talking to the survivors.

Lieutenant Colonel Lennox, callsign Eagle One, is a character in Exo Zombies. He first appeared in Infection as a supporting character, and became a playable character in Carrier, replacing Oz.

Not much is known about Lennox before the zombie infection began. What is known is that he and Oz had once worked together in Sentinel, before a Manticore bomb detonates on Oz's position at a bombed-out prison in New Baghdad, Iraq, which causes Oz to mutate into a zombie and to be captured by Atlas forces. Following Oz's capture and brainwashing into an Atlas janitor who works at Kahn's research facility, Lennox monitored Oz, Lilith Swann, Jim Decker and Kahn during the outbreak at the labs up to the point until they were rescued by Atlas from the facility. When the four of them were brought back to an Atlas command post near a Burger Town restaurant and shopping district, Lennox continued to monitor them, up to the point where they recovered and fought the undead forces in Burger Town.

Lennox, going by the callsign Eagle One, sent out a message to the four survivors, asking them to hold out while he brings in a bigger chopper to evacuate them. He later requested them to help extract several civilians, who were trapped within the area. Each time, Lennox would arrive in a Warbird, extracting the civilian while providing assistance to the group. Eventually, he arrived in a Razorback VTOL, along with his Sentinel troops, and saved them from the last of the zombie horde on the Burger Town roof, but held them at gunpoint. Upon meeting the survivors, he claimed that one of them "has to go".

True to his words, Lennox then executed Oz in front of the other three, claiming that he was the source of the infection. He then had the other three injected with anesthetic, then transported them to an Atlas carrier ship. Once on board, he led Lilith, Kahn and Decker inside, where they found several diagrams depicting Oz as "Patient Zero", hinting at a possibility of Atlas Corporation having done experiments on him. During their time aboard the ship, the group kept hearing Oz's voice play out instead of An-G's, but Lennox claims that it is the effect of the GS7 gas aboard the ship, causing the group to hallucinate. After retrieving several data tablets containing the journals of the ship's captain, they then proceeded to sink the ship in order to stop the infection from spreading. However, before they could extract in an emergency pod, they encountered Oz, who had reanimated as a zombie.

Lennox orders the group to open fire on Oz, but before they could do so, the floor beneath Oz explodes, causing Oz to vanish. The group then board the emergency pod and escape the ship as it sinks to the bottom of the ocean. Within the pod, Lennox explains to the trio about taking down Oz, which they agree upon. Lennox then picks up some closed chatter from an Atlas blackspot nearby, which was revealed to be Atlas' luxurious underwater city known as the Trident's Retreat. The four attack the site from the Landing above while Oz is also present at the site, who begins a massacre within the city underwater. After Oz takes over the emergency teleporter system, Oz brings the group to him and uses whatever traps at his disposal to try to eliminate the four, but Oz is defeated. After being teleported back to the city, Oz says that it's not over and begins to setup his final confrontation with them. Oz teleports them once again, this time haven been mutated. The four eventually kill Oz, finally ending the infection. Lennox is about to burn Oz's mutated corpse with his lighter, but Lilith volunteers to do so with a flamethrower. Unbeknown to the group, hundreds of Oz clones rest beneath the facility, one of which opens his eyes.

In the aftermath of Oz's death, Lennox is promoted to Lieutenant Colonel for eradicating the source of the infection. He also enlists Decker into Sentinel, who now fights on the front lines against Atlas. Kahn also sues Atlas, with Lilith, now a hacktivist, supporting him. 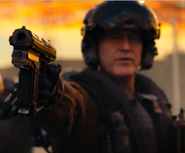 Lennox getting ready to kill Oz

Lennox discussing their next move