Call of Duty Wiki
Register
Don't have an account?
Sign In
Advertisement
in: Call of Duty 3 U.S. Army Characters

"A common thief back home in Baton Rouge, Huxley can now take pride in himself as a good soldier - and he gets some free pickings along the way."
— Call of Duty 3 bonus materials section.

Pvt. Huxley was born in Baton Rouge, Louisiana and lived most of his life as a thief.[2] Huxley joined the military to become a good soldier, but sometimes snatched some stuff along the way in the war, such as the German Stahlhelm he carries with him on his back. He can easily be noticed by his beanie, which no other soldier in the game wears.

He was enlisted in the 29th Infantry Division with Sgt. Frank McCullin, Cpl. Mike Dixon, and Pvt. Nichols.

He fought in Saint-Lô and made friends with Nichols while they trained at their camp, right after he teases Pvt. Mandlebaum on his shooting. He gives Nichols an M1 Garand rifle and made a bet on five bucks if Nichols manages to hit four helmets in a row. Huxley later sneaks some grenades to Nichols to practice throwing them. Then he asks Nichols to use a smoke grenade, which he does. However, seeing Dixon looking at them, Huxley asks Nichols not to mention his grenade acquisition while openly praising Nichols' skills to Dixon. Later, he is seen in the truck with the other soldiers, watching McCullin state his "rules". Huxley sarcastically comments on his inspiration, prompting a retort from Dixon, who then tells

the others their mission to "get coffee and donuts", causing Huxley to suggest that they go back to base and get some French rolls. Huxley then states his love for a revolting smell, saying that it "smells like home". He then joins the others in teasing Pvt. Bueller until suddenly, the truck is attacked. Afterwards, he meets Pfc. Salvadore Guzzo, who then joins the squad. Huxley and Dixon split up with Nichols, McCullin, Guzzo, and the rest of the soldiers, meeting back up with them moments later. Huxley then defuses an intense argument between Guzzo and McCullin by finding an opening that led into a cellar. Afterwards, he and the squad managed to fight several German soldiers to victory.

He, along with the rest of the squad is then folded into the 90th Infantry Division, and participate in an assault on St Germain. Just before the assault, he and Dixon groan about how easy some of the soldiers have it in the assault before being silenced by McCullin. He and the rest of the squad then fight through St. Germain and disable a FlaK 88 pinning down the convoys.

Later on he was put to defuse some bombs on the Mayenne Bridge. Moments into the battle, he is put on the task of disabling a Panzer IV blocking their way with Nichols covering him. Unfortunately, moments later, his leg gets shot and he is unable to further participate in the battle, much less disable the bombs, prompting McCullin to disable the bombs in Huxley's stead. McCullin later dies just after defusing the last bomb.

Huxley's leg was healed just in time for Dixon's promotion. He called Dixon "Sarge" while Dixon said for Huxley to keep calling him "Dix", though at that point, Huxley still called him Sarge. Later, he finds Pvt. Krupin and calls Dixon over. He then tells Krupin that he will be alright, then splits off with the squad to scout out ahead. After Dixon retorts at Guzzo's latest complaint, Huxley tells Guzzo that he had it coming.

The squad eventually goes to capture Le Bourg-St. Leonard, where, apparently, Huxley splits up with the rest of the squad until Dixon is shot. He provides a little suppressing fire from a high vantage point and joins back up with the rest of the squad moments later. After the battle is won, Dixon tells them the news, that they are being sent to Chambois, to which Huxley and the other soldiers groan at.

Huxley and the rest of the squad eventually meet the remaining Germans in Chambois. Huxley is soon sent to fetch a Bazooka, but doesn't come back until several minutes later. When he does, he attempts to kill the Panzer pinning down the rest of the squad, but he misses and the squad has to retreat into a church. Huxley later bears witness to Dixon's death and Guzzo taking charge of the squad. He fights through Chambois with the rest of the squad and cheers when the Germans retreat moments later.

Huxley lived through the Liberation of Paris. It is implied in the last cutscene in the game that he gets promoted to Corporal. He is heard repeating the same words that Dixon said when he was a Private.

Huxley is somewhat brash, but does show respect for his peers. He is sarcastic and unhelpful on occasion, but seems to control his behavior better as the game progresses. In the closing cutscene, he berates a young soldier who mocks Guzzo's leadership, just as Dixon did to himself at the start of the game.

Huxley's profile in the bonus materials. 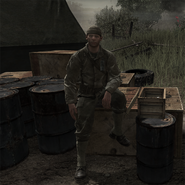 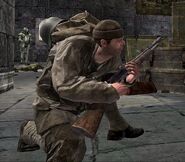 Huxley's cameo in Call of Duty: World at War.