For other uses, see Lev.

Lev (Russian: Лев) was an Ultranationalist who appeared in Call of Duty: Modern Warfare 2 during the campaign mission "No Russian".

Before the massacre at Zakhaev International Airport, Lev, Kiril, and Vladimir Makarov attempted to kill Yuri in the parking garage after discovering Yuri's collaboration with the FSB in a futile attempt to stop the massacre. He then assaulted the Zakhaev International Airport with Makarov, Joseph "Alexei Borodin" Allen, Viktor, and Kiril. He was killed while combating the FSB on the tarmac area. Like his squadmates, he spoke in a forced General American accent and used American military jargon.

Another photo of Lev.

Lev, as he appears in a flashback in MW3. 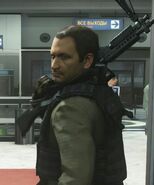