"Dragovich's second in command, Kravchenko, tested it in Vietnam. On them, on us, on his own. He didn't care!"
— Mason about Kravchenko on Nova 6.

Lev Kravchenko (Russian: Лев Кравченко) is the secondary antagonist in Call of Duty: Black Ops and in Call of Duty: Modern Warfare 3 as an Easter-Egg. He is Nikita Dragovich's second in command, and he is the reason why the SOG was deployed to Vietnam.

In any other regime, Colonel Kravchenko would be locked away, if not executed. Often referred to as Dragovich's lap dog, Kravchenko is a cold-hearted sadist made of pure evil. Staying mostly silent, he carries out his master's orders without question. A rumor originating from his village outside of Leningrad tells of Kravchenko's mutilation and murder of his sister Irina, who spurned the romantic advances of his mentor, Dragovich. This act of loyalty, as the rumor goes, led directly to his commission as an officer under Dragovich's command.

Much like Dragovich, Kravchenko detests Viktor Reznov. His reasons however, are much more mundane than those of Dragovich: Kravchenko takes his lead wholly from his General.

Kravchenko is a powerful figure of a man, built for war. He is a ruthless and amoral military officer, and must fulfill his blood-lust no matter the cost. He is aggressive and impatient but not vengeful. He does not see past his next action, and therefore will always be a weapon of war, and not an orchestrator. Kravchenko enjoys the suffering of others; it is one of the few things that can incite anything resembling a human feeling inside the man.

Kravchenko is killed in Payback when Woods stabs Kravchenko before he is about to kill Mason. On his last breath, Kravchenko says "You will die with me!" before pulling a string attached to all the grenades on his belt. Thinking fast, Woods tackles Kravchenko out of his office window, apparently sacrificing himself to save Mason. A huge explosion is seen and heard and the player should assume that both Woods and Kravchenko are dead.

Lev Kravchenko was born on March 22, 1922 in Petrograd, USSR. Not much else is known about his early life.

The Hunt for Steiner

"Ah...The hero of Berlin graces us with his presence. Have you not tired of battle, Reznov?"
— Kravchenko joking with Reznov.

At the end of World War II, Kravchenko and Dragovich seized a Nazi base in the Arctic to rescue a Nazi scientist and have him give Dragovich a weapon of mass destruction called Nova 6. Viktor Reznov and Dimitri Petrenko (World at War main protagonist's) found him and found the ship with Nova 6, but Kravchenko and Dragovich betrayed the other Red army soldiers and murdered Dimitri and almost killed Reznov, but they did not get their hands on Nova 6. Reznov was taken to Vorkuta by Kravchenko shortly after.

Kravchenko made his first appearance in Operation 40. He captured Alex Mason after a failed attempt to kill Castro. It was revealed that Castro was alive and that Dragovich and Castro had joined forces. Kravchenko took Mason to Vorkuta [citation needed] where he would spend the next 2 years.

"Surrender now... and you will be allowed to live."
— Kravchenko asking Mason and Woods to surrender.

After Viktor Reznov gave his life to have Mason escape in a big prison break, Kravchenko was most likely the one who killed him as there is a strong rivalry shown as Dragovich says to put aside their petty rivalry. Later Dragovicha and Kravchenko attended the launch of the first Soyuz rocket. The CIA ordered SOG to stop this and eliminate Dragovich. Weaver was at the Cosmodrome, having been planted by the CIA, but Kravchenko discovered him and stabbed his left eye. Kravchenko and Dragovich escaped before Mason, Woods, Bowman, Weaver and Brooks could get to him.

"You will die with me!"
— Kravchenko's last words.

5 years later, Dragovich also joined forces with the Viet Cong and North Vietnamese Army in Vietnam. The SOG tried to find Kravchenko while the CIA searched for Dragovich and Steiner, but were captured. Kravchenko met his end when Mason and Woods attacked him. Woods stabbed him but Kravchenko pulled a grenade around his neck, and Woods was forced to push Kravchenko out off the window where he exploded and killed himself along with Woods. 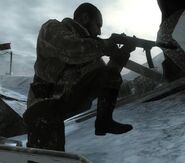 Kravchenko pointing his PPSh-41
YoungKravtchenkoCloseup.jpg
Close up in Project Nova

Badguys.png
Kravchenko (top left) in Modern Warfare 3.
Add a photo to this gallery

Retrieved from "https://callofduty.fandom.com/wiki/Lev_Kravchenko?oldid=1269490"
Community content is available under CC-BY-SA unless otherwise noted.