Call of Duty Wiki
Register
Don't have an account?
Sign In
Advertisement
in: Call of Duty: WWII Light Machine Guns

The Lewis is a light machine gun featured in Call of Duty: WWII. It has a 47-round pan magazine that rotates when the weapon is fired.

In multiplayer, it is the first light machine gun that the player unlocks. It has a range that is close to the sniper rifles, always getting three shot kills at most ranges. At much longer ranges, the damage decreases to four shots. Although it's the most favorable trait, the Lewis has three things that limit the weapon, which is the low rate of fire, slow handling traits and a wide hipfire spread. Recoil can be a bit of a issue at longer ranges, kicking upward after a few shots. However, this can be controlled if firing in controlled bursts as the Lewis has mainly vertical recoil. Attachment wise, it's good without an optic, due to its good iron sights. Extended Mag will increase the size from 47 rounds to 97 rounds instead, giving less need of a long reload. The Grip can help with accuracy at a distance, and FMJ can help for enemies that are behind cover, or to finish off lower tier kill streaks.

The Lewis is available from the Mystery Box in all maps for 1,000 Jolts and from the Light Machine gun Waffenboxes in The Tortured Path for 4,2500 Jolts. When upgraded either by the Ubersprengen or via the Freefire perk "MK. II" it becomes the Belgian Rattlesnake gaining an increased magazine, increased maximum reserve ammo, increased damage. 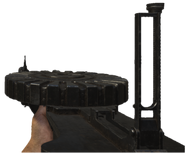 The Lewis in first person.

The Lewis mounted with a bipod.

Aiming down the Lewis's iron sights.

Inspecting a side of the Lewis.

Inspecting another side of the Lewis.
Community content is available under CC-BY-SA unless otherwise noted.
Advertisement