Knife, any equipment obtained by the player

"It takes a lot of patience to do what Lewis Howard does. Patience, and a calm, steady hand. Means it's important to remember what "calm" feels like. A feeling where your hands don't shake, and your ears don't ring. Remember that "calm" feels like home. And that you will live to see it again."
— Carver Butcher

Corporal Lewis Howard is a character featured in Call of Duty: Vanguard. First appearing in the campaign mission Numa Numa Trail, Howard was released as a playable Operator of the Trident faction in Vanguard and Call of Duty: Warzone on December 14th, 2021 during Season One as part of the "Orange Hornet Operator Bundle".

Lewis was a part of a unit led by James "Booker" Washington part of the 93rd Infantry Division of the United States Army. He was assigned a flamethrower. He exchanged words with Wade Jackson and Mateo Hernandez after the unit rescued them from the Japaneses. They fought until a ridge housing artillery guns and defended by barbed wire emplacements. He was joined by Jackson, the latter frequently clearing out barbed wire for him. He thanked Jackson by complementing him, but was shot shortly after, seemingly killing him. As Booker was mourning, Jackson offered to take his flamethrower and finish the mission.

Lewis somehow survived this ordeal and was approched by the SOE and Carver Butcher to be part of a task force call signed Trident to which he accepted.

Lewis burning the Japanese soldiers with a Flamethrower. 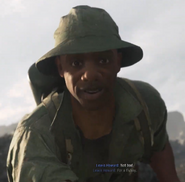 Lewis is shot and is knocked unconscious.

Task Force Trident in the face of battle.

Lewis and Isabella inside of Ring of Fire.