"What happens when I let out of jar? Will it go boom?"
— Nikolai while priming the Arnie.

The Li'l Arnie (also known as the Renegade in Keeper language) is a tactical Wonder Weapon that appears in the Zombies maps Shadows of Evil and Revelations in Call of Duty: Black Ops III. It resembles a glass jar with a small squid-like creature inside. When thrown, the squid-like creature will grow substantially and will attract any nearby enemy, killing individual enemies instantly — except Panzersoldats and Margwas, which it will lock in place for its duration — and repeatedly damaging groups of zombies for a large flow of points. When it expires, it explodes, killing any enemies (except Panzersoldats and Margwas) in close proximity.

To upgrade Li'l Arnie, all the rituals have to be completed. Next, the player carrying Li'l Arnie needs to kill 100 zombies with it.

Then, the player needs to throw Li'l Arnie at three specific items, making them dissapear:

When that is done, the player must go to the Black Lace Burlesque and throw Li'l Arnie at the ritual stand on the stage. Then, the small squid-like creature will appear on the table dancing to an instrumental version of Snakeskin Boots whilst wearing the three items with four Gateworms appearing above it, acting as its backup dancers. Once the song finishes, they all disappear in a purple cloud, and Li'l Arnie becomes upgraded.

Its upgraded self behaves the same as the original one, but it kills enemies faster and has purple liquid surrounding it instead of the original green.[2] Its duration is also increased and takes more hits from the Margwas before being dispatched.

To upgrade the weapon, 150 kills with Li'l Arnies must be collectively completed among all players in the lobby. An Arnie must then be thrown into the church's bell tower window. Once one of the Li'l arnie is thrown, Samantha's giggling will be heard and all of the players with the tactical will receive a refill of Li'l Arnies, now upgraded.

On both maps, the Crate Power GobbleGum from DLC Pack 3 can be used to bypass the upgrade process for Li'l Arnies, similar to the Monkey Bombs on Gorod Krovi.

Li'l Arnie about to be thrown. 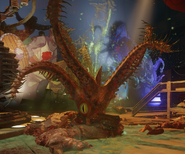