"A militarized Central Park stretches across a vast landscape, ripe for long-range sniper and LMG fire. Mounted turrets on either end lend power to anyone brave enough to expose themselves in exchange for deadly firepower. Plan out your movement and always be aware of nearby sightlines to avoid becoming fodder for the enemy."
— Call of Duty ELITE

Liberation, set in Central Park in Manhattan, New York, is a multiplayer map for Call of Duty: Modern Warfare 3, included in Content Pack 1.

The map was been released along with Piazza as a part of the first Call of Duty: Modern Warfare 3 Content Pack, on January 24th, 2012 for Call of Duty ELITE subscribers on Xbox 360, and was released on February 28th, 2012 for PlayStation 3 Elite Premium members. It was also released for PC via Steam on May 8th, 2012.

In Survival Mode, although Liberation does not have a difficulty level in-game, it plays as if it had the difficulty of Regular. The player(s) start with the USP .45, two Frag Grenades, two Flash Grenades, a Self Revive and 250 Armor. The hostiles include Bomb Squads, Chemical Warfare, Choppers, and Riot Shield Juggernauts. 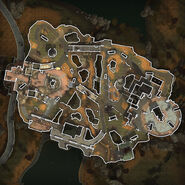 Billboard on the outside edges of Liberation.