For the machine guns in most of the World War II titles, see Machine Gun.

A Light Machine Gun, often abbreviated as LMG, is a type of weapon in the Call of Duty series.

Light machine guns are a hybrid between a Heavy Machine Gun and an Assault Rifle. Light machine guns have the ammo and similar power to a Heavy machine gun, but have more damage and similar capacity to a Submachine Gun; however, performance and behavior has fluctuated between games. While most Light Machine guns hold over 75 rounds in their magazines and have lethargic handling characteristics, there have been some exceptions to this trend. A more recent one is in the form of the Stoner63, which has only a 30 round magazine, but reloads almost twice as fast compared to any other Light machine gun in its respective game. Another big exception is the Chain SAW, which allows the player to move faster, and features a very tight hip-fire cone, at the cost of a smaller belt magazine and the inability to truly aim down the sights.

The drawbacks of light machine guns are that their handling characteristics are universally poor. Due to their weight, they will usually cause the player to move much slower than compared to other weapons. In addition, they take a long time to aim, and most Light machine guns take very long times to reload. To compound this weakness, the Light Machine guns usually have very large hip-fire cones by default, making them extremely ineffective at close quarters. It is recommended to have a backup weapon to fall back on if the player were to get in said situation.

Due to the extended capacity and damage output of Light machine guns, Light Machine guns are generally most effective in Medium-long range gunfights, where their extended ranges and large capacities allow players to easily outperform lightly armed enemies, such as Shotgun users and Submachine Gunners.

List of Light Machine Guns in the Call of Duty series

RPD (Campaign and Zombies Only)

Stinger (Attack of the Undead update)

Zweihänder (Blackout and Zombies only) 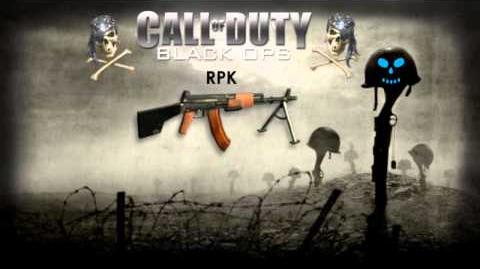