Obtain and upgrade all four elemental staffs; the Staff of Fire, Staff of Ice, Staff of Lightning and Staff of Wind.

For a detailed guide to obtaining and upgrading the staffs, please visit their respective pages.

Note: Each 115 Generator must be turned on at least once in order for the step to be completed and for the next step to be initiated.

Once all the staffs are upgraded and each generator has been turned on at least once, the players must place each of the four staffs in the pedestals that have now appeared around the map. One pedestal spawns in front of the original staff pedestals on the lowest level of the Excavation Site, and three more spawn in each of the Giant Robot's head. Each pedestal only takes a specific staff. Once the staffs have been placed, they cannot be picked up until after this step is completed, which is when they return to their original pedestals in the Excavation Site.

The staffs can be put in any order. The player will know if this task is completed correctly as Samantha will give a voice notification, and all staffs will be available again in the staff room while the pedestals used for the step will despawn.

In the Black Ops II version only, a glitch also exists where the player can trick the game into thinking all the staffs have been placed in the pedestals, making this step almost effortless. To do this, put the Fire staff in the newly spawned pedestal inside the excavation site and press the action button on its original pedestal to regain the staff. Repeat the process three more times. When done, a music cue will play, Samantha will talk to the player and the fourth pedestal will vanish. Note that doing this glitch may have some unwanted side effects, though they are mostly visual bugs.

Note: This step can only be completed if all 115 Generators are active, otherwise the pedestals for the staffs do not despawn.

After placing all the staffs in the pedestals, all three robots now continuously roam the map at the same time until this step is completed. Only one of their feet will be lit up, meaning only one can be entered at a time. Before proceeding with this step, at least one player must have G-Strike obtained. It is recommended to try obtaining it as soon as possible before killing zombies with melee required for obtaining it becomes too difficult. It can be obtained before starting any of the other steps.

One player needs to enter one of the robots and press the red button that has appeared. As soon as the button is pressed, another player has to throw a G-Strike beacon on the seal behind and to the right of Generator 5, out of bounds. It looks like a big circle of cracked stone on the ground. If the G-Strike is thrown inaccurately, it will disappear and the Demonic Announcer can be heard laughing. If done correctly and soon enough from pressing the red button, the robots will fire an artillery on the seal, breaking it. Samantha can be heard talking, and a small audio cue plays.

To do this in solo, the player must enter Odin from either footprint (although for less experienced players the Stamin-Up side is recommended, as you have more of an idea of where you're throwing the G-Strike), and press the red button as soon as Maxis says "one" during the purge sequence (as being purged is quicker than ejecting manually). Immediately after landing, run to the seal, prime the G-Strike on the way and throw it onto the seal. This must be done quickly, as the time window is short. This can also be done from the footprint next to the Lightning tunnel, but it is less optimal. It is important to remember that it may take a lot of time to get the correct foot, and even then success is not guaranteed if the player is too slow, making patience more than necessary.

After breaking the seal, deploy the Maxis Drone near it. He will enter the pit, and soon after ten Panzer Soldats will fly out and attack the players. High-damage weapons such as Ray Gun Mark II, G-Strike or the upgraded staffs are recommended to dispatch them. After killing all of them, the players can move onto the next step.

When the player obtains a Zombie Blood, they can see a plane in the sky glowing yellow, similar to the one that drops a piece for Staff of Fire. When it is shot down, its zombie pilot will drop down to the ground. The zombie will circle the Excavation Site in a clockwise pattern, and like the plane it was in, it can only be seen in Zombie Blood. It sounds like a Templar/Crusader Zombie, but looks similar to the regular ones. It is wise to go counter-clockwise around the Excavation Site as that way the player will run into the zombie at some point. After killing it, it will drop the Maxis Drone, which now has more firepower including a Pack-a-Punched version of its machine gun.

Step 6: Wield a fist of iron

All players must now obtain the One Inch Punch from Rituals of the Ancients (if they do not have it yet) and upgrade it by hitting 20 Crusader Zombies each with white glowing arms inside the Excavation Site with it. Merely hitting the zombie with the air coming from the One Inch Punch attack is enough, and thus the players do not necessarily need to kill the zombies with it, though it will help to prevent the player from being surrounded. Once the player has hit enough zombies, a tablet with a white glow will drop, which can be picked up to obtain the Iron Fist. Note that picking it up will make a short white flash that can blind the player momentarily, but also cause any nearby zombies to be knocked over for a few seconds. Although, after round 20 the zombies will not be knocked over, they will be stunned for around half a second.

All players in the game must obtain the Iron Fist. It is recommended to not hit Crusader Zombies that are just coming in from the walls, as the tablet can drop out of the player's reach, making the rest of the easter egg impossible to complete.

Note: Completing this step unlocks the achievement/trophy, making the following step optional. The rocks that create pathways in the Crazy Place will also stop falling down after this step, making it a viable holdout location as the player's pathway is no longer obstructed at random, giving the player a wide open area with no threat from Panzersoldats or the Giant Robots as well as pedestals for all the staffs.

If the player wishes to free Samantha and complete the Easter egg, they need to deploy the Maxis Drone in the Crazy Place. He will rise up into the portal, saying "Samantha, I must go to her, the paradox must be resolved." After this, the player can hold the action button on the blue rock in the center to "access the teleporter", which ends the game. The ending music will be different, and the camera will pan into the portal instead of showing the Excavation Site and the Giant Robots as usual. After the scoreboard is shown, a special cutscene will also play (seen below).

Fire Staff in its pedestal for step 2

The button inside of the robots in step 3

Zombie with glowing arms in step 6 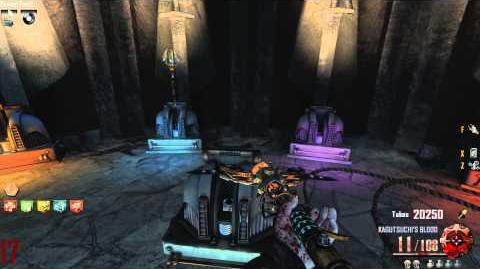 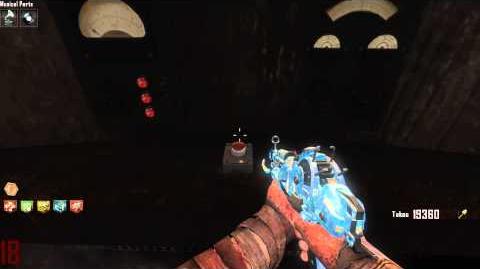 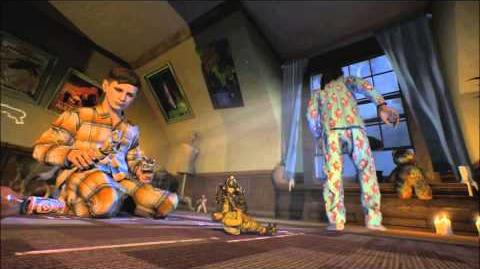