Call of Duty Wiki
Register
Don't have an account?
Sign In
in: Call of Duty: World at War Single Player Levels
English

"Storm the White beach of Peleliu Island to make way for an Allied takeover."
— Level description

"Years after the raid on Makin, we're heading up an all-out assault on Peleliu Island. No POWs to rescue this time...Our mission: Take the airfield and cripple their supply network. Alongside familiar faces, fresh faced recruits...the older guys like Miller, Sgt. Sullivan and myself, we're known as the old breed..."Old"..we're not even out of our twenties."
— Roebuck in the opening of Little Resistance

"Little Resistance" is the second mission of Call of Duty: World at War.

In this mission, Miller starts out on a landing craft (LVT), making its way to Peleliu Island's White beach. When Private Koopman realizes the craft is stuck on coral, he gets shot by a Japanese sniper and the Marines realize they've become vulnerable to unexpected enemy fire. They attempt to exit the vehicle before being hammered by shells from the Japanese position, but a shell hits the LVT and destroys it, sending Miller, Polonsky, Sullivan, Roebuck and three other Marines into the water. The Japanese managed to kill two Marines before Miller is pulled from the water by Sergeant Sullivan, who orders him to radio in a rocket strike on the enemy lines, which destroys the hostile Machine Guns along the tree line.

When he does this, he proceeds onto the island. After a flamethrower team, led by Pvt. Glover wipes out a machine gun nest, Miller then goes through a small trench and is faced with a large Japanese trench network and machine gun nest. Miller then proceeds through the trench and kills the turret gunners. Miller called in two rocket strikes on Japanese tanks to clear the way for an American tank and some more Marines.

After all that action, Miller, Polonsky, Roebuck, and Sullivan re-group in the back room of the trench, when moments later a Japanese soldier (subtitles say American Marine) screams, causing Sullivan to run towards the door but then is stabbed by a katana from the Japanese officer in the chest, fatally wounding him. Roebuck quickly guns down the Japanese officer with his Thompson, (can be shot by Miller also) and then attempts to aid Sullivan but is too late. Miller then witnesses the death of his squad leader. 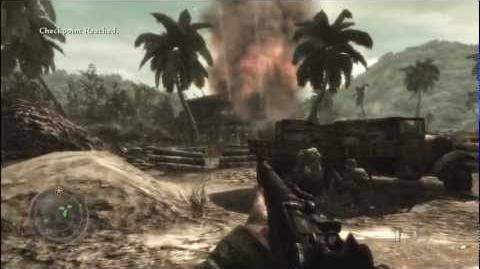 Soldiers on storming an enemy position in Little Resistance.

One of the statues that holds the Ray Gun.

Svenska
Community content is available under CC-BY-SA unless otherwise noted.