For the Pointstreak in multiplayer, see Loki (pointstreak).
For the space station of the same name, see LOKI Space Station.

"Join Icarus Team as they assault the Federation space station and attempt to take control of its orbital weapons."
— Mission Description

"Loki" is the seventeenth and penultimate campaign mission of Call of Duty: Ghosts. It involves Icarus Team raiding and commandeering the LOKI Space Station, a Federation assault satellite array that was reverse engineered from ODIN. This mission takes place around the same time Logan and Hesh board and assault the Federation supply train to kill Rorke, as well as a few minutes before Icarus Team is ordered by Merrick to fire upon the train tracks, at the demand of Hesh prior to breaching the engine room with Logan.

Sgt. Thompson, 2nd Lt. Collins, and the other American astronauts are deployed from their space shuttle. They shoot their way through external and internal parts of the LOKI command station, killing the enemy Federation astronauts who stand in their way. They try to access the control room via the central hatch, but it explodes before entry. Left with no other choice, they are forced to fight their way to the control room from the outside the station. After clearing all the enemies outside, they plant explosives on the control room's exterior. After detonating them, they kill the Federation troops inside and seize control of the targeting system console. With the rods under their control, they destroy multiple Federation ground targets, Merrick (ordered by Hesh) orders the team to fire at the train, but Collins argues, saying that there are Ghosts on the train. Merrick replies that the order came from Hesh. Thompson then fires at the train with a kinetic rod. The mission ends with the rod hitting the tracks. 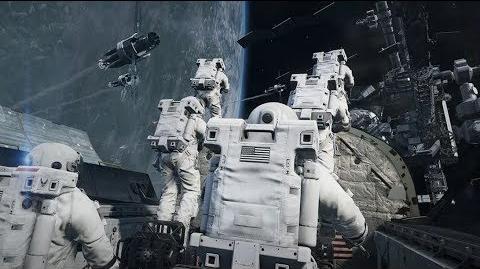 Retrieved from "https://callofduty.fandom.com/wiki/Loki?oldid=2489595"
Community content is available under CC-BY-SA unless otherwise noted.