Love and War is the main easter egg of the Zombies map Gorod Krovi that appears in Call of Duty: Black Ops III.It requires the player to "free" the original Nikolai Belinski. Much like the Origins, Der Eisendrache and Zetsubou No Shima easter eggs, it is entirely possible to complete this easter egg in solo.

Before starting the easter egg, the player must:

NOTE: Steps 1 and 3 can be done before the other.

Step One: Power Up the Generator

Inside the Hatchery basement, the player has to find a generator next to the incubators. The generator can be found underneath a small green/black tarp. From here, the player needs to lure a Valkyrie Drone close to the generator and destroy it. This will allow the player to interact with the generator. The tarp covering the generator will be flowing and an audible hum can be heard to signify it is on.

Once this step is done, take the sewer back to Belinski Square.

There are six valves located around the map, it is best to get familiar with their locations.

The goal is to interact with all the tubes properly, to get air to flow through all the tubes and push the Master Code Cylinder to the other side. Blue lights mean air is flowing through the pipe and that one is complete. A white light indicates there is no air flowing through the pipe. Green indicates the initial starting point. The goal is to have one green valve and the other five blue.

Each time the player rotates a particular dial they are releasing pressure in the tube, which in turn affects the next tube in the sequence.

Once the player has obtained the Master Code Cylinder, the player must bring it back to S.O.P.H.I.A.

Around the map are several hidden silver trophies that can be picked up by the player. Their locations and how to obtain them are as followed:

Once they are collected, the player will have to place them underneath the large monitor on the opposite side of S.O.P.H.I.A in the power room. NOTE: The player must first complete step four before they can place the trophies underneath the monitor.

Once the Master Code Cylinder is in place, a password must be inserted into S.O.P.H.I.A. The player must shoot the individual letters on the spin wheel to the left to spell out the correct code, KRONOS.

Press the interact button to complete the code.

If the incorrect code is entered, S.O.P.H.I.A. will disable the password controls until the next round begins.

The first five challenges will happen in any random order, while the sixth one is always the last one. Press the button underneath the main monitor in Dragon Command, where the statues have been placed to begin each task. If a task is failed, the player must wait until the next round before attempting that challenge again. The player cannot begin any of these tasks on a Valkyrie Drone round.

Once all tasks are done, interact with S.O.P.H.I.A. again. S.O.P.H.I.A will give the player a power core for the original Nikolai's mech. Head over to Belinski Square and launch the whelp from the Gauntlet of Siegfried towards Nikolai's mech. It will drop off the core and return back to the map. Once done, return to S.O.P.H.I.A. This time, S.O.P.H.I.A. will detach from the machine before flying into the sky. The machine will be pushed back and reveal a secret hatch. All players must stand on the hatch, which will drop the players into another sewer pipe, which will bring them to a circular area behind Belinski Square. Inside the small circle surrounded by pillars is a button, which will cause a Gigant Robot to fire a beam at a pile of debris, freeing the original Nikolai's mech.

During the first part of the fight, the original Nikolai will assist the players in helping him kill a dragon. The dragon will breathe fire upon the entire area excluding the rim and trenches. Use the Guard of Fafnir to be able to stand in the fire if the player fails to reach a safe zone. When it lands, Nikolai 1.0 will expose a weak point on the dragon via an energy harpoon. All players need to focus fire upon this one spot to damage the dragon. To defeat the dragon, the player has to shoot three different weak spots. One on its right wing, one on the left side of its belly and one on its neck. If the player cannot find the weak spot, Nikolai will help them find it with several quotes, such as "Shoot its belly". After causing enough damage on the first weak spot, the dragon will start attacking the players with fireballs. During the first stage, the player will have to deal with several Russian Manglers, Zombies, and Valkyrie Drones. When the dragon is dead, a mini cut scene will play with the player's character talking to the original Nikolai. Original Nikolai will then become hostile and the player now must battle him. To defeat Nikolai, the player must shoot four different spots, the two yellow lights on the front of the mech and two yellow power cores on the top of the mech that come out when Nikolai attacks the player (mostly when deploying R.A.P.S.). Once the player destroys the power cores atop the mech, the player must focus fire on the last power core on the bottom of the mech. After the mech is destroyed, the cutscene will play, and then everyone will receive the Love and War achievement and 7500 XP. The players (except Richtofen) will hear a quote from Doctor Monty hinting at the conclusion of the Zombies storyline. 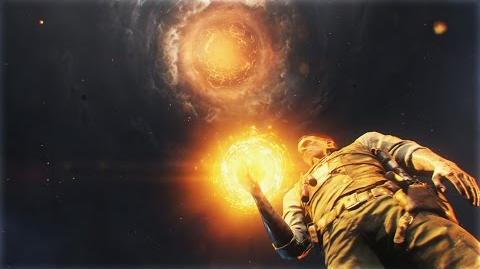