The Bogan (by Wade Jackson)

Multiplayer: Get 100 Hipfire Kills.
Zombies: Use SMGs to Eliminate 50 Boom-Schreiers.

"Lucas Riggs is always up for a challenge. If you tell him something's impossible, he'll always prove you wrong."
— Carver Butcher

Second Lieutenant Lucas Riggs is one of the four playable protagonists and Operator featured in Call of Duty: Vanguard.

Lucas Riggs prefers actions over words, and although his personality is far from explosive, his method of dealing with threats is highly combustible.

A child of sheep farmers just outside Melbourne, Australia, Riggs worked with his family to tend the herd and collect wool. When World War II began, he didn’t hesitate to sign up before conscription was even implemented. He was ready to see more of the world and fight a greater evil than the occasional petty mobster in his area.

Riggs can be described as an enigma – he would not take offense to this distinction, as he understands people just as much as others understand him.

To his allies, Riggs is a gentle giant, often being the life of the party, but not one to seek the spotlight. To his enemies, Riggs is an intimidating and brutal warrior of honor. He stands up to wrongdoers and those who start conflicts with blunt force, ironically done via his specialty within the Australian Army: explosives.

Ultimately, Riggs is the definition of passion within a soldier. Valuing his fellow squad mates and country above all else, he wants to show the world what Australians are made of.

Private Riggs was initially a part of an Australian contingent deployed in Tobruk. He and the other Australian soldiers were often rudely refered to as Rats by their British superiors. Riggs was assigned to a demolition team that consisted of Lieutenant Robert Jacobs, Private Des Wilmot, and "Bluey" Smith. The team was part of a regiment under the command of Major Henry Hamms, an ambitious British officer who was often disrespectful to the Australian soldiers and often took the credit for their accomplishments.

During their deployment, the team is assigned to ambush and raid an incoming Nazi supply convoy as they were running low munitions and laid out explosives along the convoys predicted route. Waiting until nightfall for the convoy to arrive, Riggs prepares to detonate the explosives until Hamm (wanting to set off the explosives himself) took the detonator and caused a premature detonation, blaming Riggs for the failure. They fought through the remaining forces, then secured the convoy. A German soldier tried to stab him, but Bluey were stabbed instead, prompting the trio to chase the escaping Germans. They ended up the chase on an uncharted area, where they spotted an outpost. They fought through it and got German intel, including Hermann Freisinger and Erwin Rommel, and some updated maps. They then got to another German depot not included in their maps. They dodged the many German patrols, until they reached the place. They destroyed both the armories, and the tanks under repair. Then, he was tasked to shoot down a Stuka plane. After leaving the area, the reward for the Australians were getting arrested for insubordination on their officer Jacobs.

Later on, in El Alamein, they were advancing through the field, when they were ambushed by Nazi positions. The group suffered casualties just to regroup. Hamms commanded the group to hold position while waiting for air support, while both Lucas and Des disregarded their superior's command, and went to destroy the flak emplacements in the hill. The duo fought their way to the position, and held the line against a German counterattack. Des was killed at the last second, until the planes bombard the enemy positions. While Lucas was mourning the death of his friend, the Australians tried to plant a flag in the area. However, Hamms took it down and ordered a British flag be placed instead. In revenge for his disregard for the Australians, he punches Hamm square in the face before willingly allowing himself to be arrested.

In 1944, Lucas was still locked up in a prison in Tunisia, where he would meet Carver Butcher. Lucas refused to speak to Butcher, citing his hatred of the British and also under the belief that he was there to kill him under orders from Hamms. Butcher, who deliberately got himself arrested to recruit Lucas to a special forces team, attempted to appeal to him, stating that he shouldn't rot away in prison over punching his superior (even if he had it coming). Lucas still did not want to join, so Butcher bid him luck on his court martial, saying "accepting their punishment means they win."

Thinking about what he said through the night, Lucas gave in, revealing to Butcher that he had a key pocketed to escape since his imprisonment. Lucas and Butcher make their way to the cafeteria, where they assault the guards and blow up a wall to escape, cementing Lucas's status as a member of Task Force Vanguard.

After joining Vanguard, the team was tasked to go to Berlin, where they were to find documents on a Nazi project named Phoenix. They were captured however, and one of their own bludgeoned to death by Hermann Freisinger. Lucas blames the failed mission on squad leader Arthur Kingsley and Wade Jackson, the latter of whom had seemingly abandoned them. Vanguard was taken to Gestapo headquarters in Berlin, where they were awaiting interrogation by Jannick Richter. Wade is captured a day later, and Richter executes Richard Webb to demoralize them from lying.

When Polina Petrova reveals a knife she hid under her boot, Arthur devises a plan with Lucas; using the tension between the British and Australians, they could convince Richter that Lucas wanted to defect and tell him Allied plans. This works, and Richter is fooled long enough for a bomb Wade snuck in on a plane to detonate, allowing Lucas to throw Polina's knife at a guard and incapacitate Richter. Lucas unlocks the door to the cell where the team was held in, and watched as Arthur slowly inserts a knife into Richter's shoulder blade, which kills him.

The team then make their way to Tempelhof Airport to go after Freisinger, where Lucas is then tasked to destroy the tanks blocking their path. They eventually manage to apprehend Freisinger, where Polina and Arthur burn him to death, and seize his escape plane containing loads of valuable Project Phoenix intel.

As a demolitions expert, he can stack 4 lethal throwables. 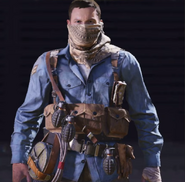 Riggs in Call of Duty: Mobile. 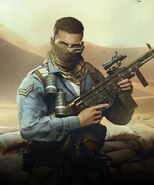 Lucas as seen in Festive Fervor.

Lucas as seen in Season Two.

Anna Drake sneaking up on Lucas with the Ice Axe.