In the original Call of Duty, the Luftwaffe makes an appearance in the British campaign level "Airfield Escape" in which the player must mount a Flakvierling 38 and destroy incoming enemy Ju-87 "Stuka" dive-bombers. The aircraft will attack in three waves, each wave dive-bombing the player. After the final wave, a Focke-Wulf 200 "Condor" will arrive. Eventually the player will be driven toward the "Condor" and the level will end. The Luftwaffe's paratroopers (Fallschirmjäger ) are fought frequently in the game, especially, the American campaign. They are distinguishable from regular Wehrmacht or Waffen-SS troops by their rounded helmets which were the standard issued paratroop helmets for the Fallschirmjagers (which look more similar to American M1 "Steel Pot" helmets than the German Stahlhelms) and camouflage outfits. 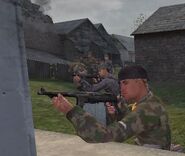 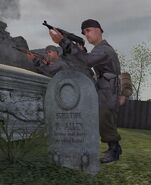 In Call of Duty: Finest Hour, at Stalingrad, Heinkel 111s can be seen in the distance bombing the city but pose no threat to the player as the bombs land in the distance. In the two Operation Little Saturn levels, a Luftwaffe base is attacked by a Russian T-34 tank group led by Nikolai Badanov. There are many Junkers Ju 52s and Ju-87 Stukas on the ground as well as in the air.

The Stukas will strafe the player with cannon fire and bombs, and will quickly destroy the tank if left unattended to with the T-34's machine gun. When the German transports are attempting to leave the airfield at the end of the campaign, if they strike the player's tank they will cause damage. They can be easily destroyed with the T-34's machine gun. The main cannon works as well, but is usually more difficult to aim and fire with.

During the British campaign, Stukas can be seen attacking the player, while escaping on the jeep.

During the American campaign, Messerschmitt Bf 109 fighters can be seen overhead in Remagen. These don't cause harm to the player and are engaged by American P-51 Mustang fighters.

In Call of Duty 2, in the British North African levels such as "The End of the Beginning" and "Assault on Matmata", Luftwaffe Ju-87 Stuka dive bombers oftentimes harass British forces with strafing attacks and dive bombing runs. They can also be seen occasionally dogfighting with British Spitfires. At the end of "Assault on Matmata", the player must use a German Flakvierling 38 to destroy waves of attacking Ju-87s .

The Luftwaffe is first seen in the level "We've Been Through Worse" where Ju-87 Stukas are attempting to destroy the attacking American forces, but mobile American AA emplacements have been set-up to attack German planes.

In the level, "Liberators", the player must man various gun positions aboard a B-24 Liberator and shoot down numerous Luftwaffe aircraft, beginning with a slow-moving squadron of Messerschmitt Bf 323 transport aircraft and with much of the remaining level spent fending off constant attacks by Messerschmitt Me 109 fighters.

In the mission "Piano Lupo," the player is told to enter an M3A1 Half-track and man the M2 Browning Machine Gun and eliminate German planes.

In Call of Duty 3, Fallschirmjäger are encountered in "The Island" and "The Forest" during the American campaign. 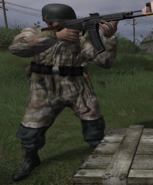 During the Call of Duty: World at War campaign level "Vendetta", Focke-Wulf 200 Condors are seen flying en mass overhead. They are important to gameplay, because Dimitri Petrenko uses the roar of the Condors' engines to hide his sniper shots. The Luftwaffe is not seen for the rest of the campaign. In Multiplayer however, when playing War on "Downfall", one of the objectives is the "Luftwaffe Headquarters".

Fallschirmjäger were supposed to appear in Call of Duty: World at War, but were scrapped. Their model files remain in the game's data, including helmets and gear files although no head models are present. A winterized model suggests they would've appeared during sometime during the scrapped Holland campaign. 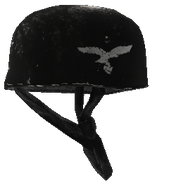 The Luftwaffe appear in the mission "Scorched Earth'' as part of the Bundeswehr which holds off the Russian Ground Forces and Ultranationalists through Hamburg and Berlin, and also aid Team Metal in the Second Battle of Berlin in World War III.

The Luftwaffe appears in the mission "Operation Cobra", "Battle of the Bulge", "Ambush" and "The Rhine", primarily as Junkers Ju 87s dive bombers. In "Battle of the Bulge", the player takes control of Matthew Weber and shoot down Stukas with the P-47 Thunderbolt. In "Operation Cobra" and "The Rhine", the player as Ronald "Red" Daniels is ordered to take out Stukas with Flak 38 AA guns. In "Ambush", the 1st Infantry Division ambushes a Luftwaffe base in the Ardennes. Heinkel He 111s can also be seen during the intro cinematic of the campaign.

The Luftwaffe appears in multiplayer as aerial scorestreaks for the Axis Powers and is later added as a playable faction in the War Mode map Operation Intercept with The Resistance map pack, which the Axis team is part of the Fallschirmjäger 3rd Parachute Division.

The Luftwaffe appears in the Nazi Zombies map The Darkest Shore as Stuka dive bombers. The players are required to use Flak 30 AA guns to destroy them.