"The Luger pistol carries 9mm ammunition and an 8-shot magazine. It's a high prized trophy for Allied soldiers and can often be found as a sidearm in Russian or American hands."
— Call of Duty manual description.

The Luger is the German sidearm of choice in both Call of Duty and United Offensive. There are several ways to obtain it in the campaign. When German enemies run out of ammo for their main weapon, they will pull it out. The player can also shoot their legs to force them into the state now known as Last Stand. Once you finish off the German soldier he will drop the Luger.

This handgun is the standard sidearm for the German team, as well as being recycled for use as the Russian team's sidearm in Call of Duty’s multiplayer. In United Offensive's multi-player, the Russians use a TT-33. This is similar to how the British must use the Colt .45 M1911 pistol for their sidearm even though it is the American sidearm of choice, but gain the Webley revolver in United Offensive. The Luger is best used as a last resort weapon when the player is out of ammo, or when trying to get through a tight spot. The Luger is less powerful than the Colt .45, and has a slightly lower rate of fire, but it is more accurate and has a higher magazine capacity. 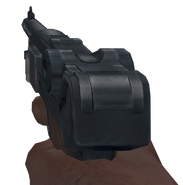 The Luger in first person 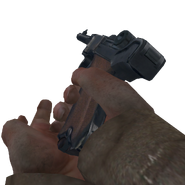 It is superficially the same as the Luger in Call of Duty and Call of Duty: United Offensive, yet is slightly easier to obtain, due to the fact that enemy soldiers going into last stand tends to be more common in CoD 2 than in the previous versions. It does slightly less damage compared to the older versions as well. The toggle moves in front of the sights when the gun is fired, which can make aiming down the sights somewhat difficult at range. It usually kills in 3-4 shots, and has a quick reload. If used properly, it makes a great sidearm which can be used very effectively.

The Luger is again the standard sidearm for the German team in multiplayer. It does the same amount of close-range damage compared to the older versions, but is slightly less powerful at range. It is still a good weapon of last resort, or for trying to get through tight spaces where slower-firing weapons will not suffice. It will not be so successful in other circumstances, however. 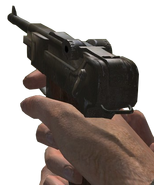 The Luger as seen in Call of Duty 2

Call of Duty World at War

The Luger is only available in multiplayer as the standard German side-arm and is unique in that it doesn't appear in main console versions of World at War. It has an 8 round magazine and medium recoil and power. It has the same HUD icon as the Nambu (the picture on the HUD is a Luger, meaning that the Nambu HUD icon is wrong) and a very similar reload. It is only seen in the level "Promotion" where Cpt. Grigorev shoots a Russian soldier for not following his orders.

A modernized version of the Luger appears in Modern Warfare Remastered as the BR9, added in the August 8th, 2017 update. It has the potential for a two-hit kill at close range without Stopping Power, outstripping the M9, M1911 and USP .45, and putting it on par with the Desert Eagle and the .44 Magnum. It benefits over the Desert Eagle and .44 Magnum by having one or two more bullets respectively. However, its maximum fire rate of 600 is slightly lower than the standard 625 for most pistols.

The BR9 suffers from extremely high visual recoil that settles slowly. Despite the visual kick, the gun is relatively accurate and actual recoil is low. One unique disadvantage it suffers among pistols is the very slow initial draw time, at 0.83 seconds. This is over three times longer than any other sidearm. It is possible to avoid this problem by drawing it at the beginning of a spawn so that switching to it later in the life skips the animation. The animation always plays when going into Last Stand, even if the weapon had been drawn previously, so the BR9 is a very poor choice to use with the Last Stand perk.

The P-08 (referred to as Luger in the Alpha) returns in Call of Duty: WWII.

The P-08 is the sidearm used by the Wehrmacht and can be obtained by putting them in Last Stand. A P-08 with a suppressor attachment is uniquely a starting weapon in the stealth portion of the level "Liberation". It also appears notably in "Hill 493", where it is used by a German tank commander, as well as in the ending cinematic of "Ambush" where Metz uses a P-08 to kill a prisoner of war.

Unlocked by default for all players, the P-08 possesses a three hit kill range up close and a five hit kill range from afar. The P-08's long range abilities are hindered, as it has obstructive iron sights, consisting of an extremely small front post framed by large rear sights. Accuracy is further hindered by the pistol's unique toggle-lock action, which obstructs the view as it is fired. This view obstruction is rectified with the Torch and Abwehr variants, as the iron sights are no longer obstructed by the toggle-lock system.

The P-08 carries a small 8 round magazine, which can be remedied by the use of the Extended Mag attachment, boosting the magazine size to twelve bullets. The Steady Aim attachment boosts the P-08's already small hipfire spread to a near negligible visible spread. The Akimbo attachment given by the Duelist basic training allows the use of two P-08s, serving as lethal substituted for close range battles.

In Hardcore modes, the P-08 is a one shot kill to any part of the body at close range, featuring a two shot kill at extreme ranges.

The P-08 is also available in the Infantry Division default class, equipped with the Steady Aim attachment.

The P-08 appears in Zombies mode, being able to be used as a starter weapon on all maps. As The Final Reich, Gröesten Haus, The Darkest Shore and The Shadowed Throne do not feature the P-08 as a weapon in the Mystery Box, the only way to acquire it is to spawn with it. In The Tortured Path, the P-08 can be bought from the starting weapon Waffenbox for 500 Jolts, or found dropped by zombies.

The P-08, being a standard starting weapon, is fairly weak past round eight due to its low damage per shot. However, its extra bullet in the magazine and faster fire rate than the 1911 allows it to be a viable point gathering weapon in early rounds. Ammo capacity is of no concern, as its 112 rounds of extra ammunition is more than enough to suffice even in early Pest rounds, and should be enough to earn enough jolts to acquire another weapon.

When upgraded via Ubersprengen or by Mk. II Freefire special mod, the P-08 becomes the G.I.'s Souvenir, complete with an increased magazine size to 16 rounds, as well as an increase to 384 rounds in reserve. The upgrade also increases the damage dealt per bullet, as well as converting the P-08 from a semi-auto firing mode into a four round burst. However, The G.I.'s Souvenir is rendered as a weak weapon at roughly round 20. The G.I.'s Souvenir however, can be utilized to serve as a useful personal defense weapon to clear lines of zombies inside choke points,or to severely weaken zombies in higher rounds. 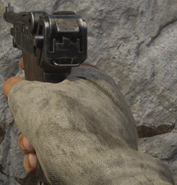 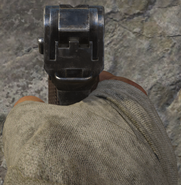 Aiming down the P-08's iron sights.

Inspecting a side of the P-08.

Inspecting another side of the P-08.

The Luger returns in Call of Duty: Vanguard as the Klauser.

The Klauser can be brought into any map via Create-A-Class, at Loadout rarity and can be found at any rarity via the Mystery Box for 950 Essence.