Brick in the Wall
Desperate Measures

Lukas Richter is a former CIA asset turned mole for the KGB and was an informant for Greta Keller and a character featured in Call of Duty: Black Ops Cold War.

Brick in the Wall

"You? I've seen your picture. They're looking for you."
— Richter to Bell.

During the mission Brick in the Wall, "Bell" meets with Jason Hudson's CIA asset informant Greta Keller at a bar, where Franz Kraus and Anton Volkov were supposed to meet. Keller asks Bell to rescue her informant Richter informs after he was captured in a random sweep by the Stasi and informs Bell that he will not survive torture for long.

If the player heads to the place where Richter is located, there will be three Stasi guards guarding him and he will be seen tied to a chair. If the player reads a document on one of the desks, it reveals that he is secretly working for the KGB and is a CIA mole. The player can ask him questions about the document and Richter lies about working for them.

If the player rescues him, Richter will be later seen along with Kraus and Volkov after Bell gets captured by Kraus while hiding a tracker in Kraus' briefcase. Volkov is displeased that Kraus let Bell break into his apartment, Kraus points out that Richter helped him capture Keller, which she insults her former colleague with Richter claiming that the KGB pays more. When Adler and his team attacks the group, Richter is last seen fleeing during the shootout.

"Oh. Are you here about my assignment?"
— Richter to Dimitri Belikov, if alive.

If Richter is left alive, he will later return where he will be encountered in the KGB Headquarters waiting to be debriefed by his handler before starting his new reassignment and the player is given an optional task of once again being given the chance to take him out permanently or just leaving him alive. 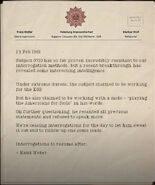 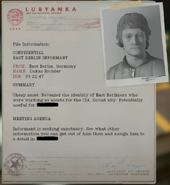