The M.2187 is a magazine fed, lever-action shotgun that was added to Call of Duty: Infinite Warfare in the June 27th, 2017 update. It is the only shotgun in the game that can use the Akimbo attachment.

The M.2187 is one of the strongest weapons in the game, though it can only be obtained via Supply Drop or having the Season Pass installed. The weapon boasts a high damage profile at close range, allowing for easy one shot kills at point blank range to a short distance away.

However, two major drawbacks with this weapon is its incredibly short range due to its status as a shotgun as well as it's remarkably slow rate of fire. Equipping Rifled Barrel and variants that have Sharpshooter can help increase the one shot kill range for the weapon. Akimbo on the M.2187 is also a highly effective attachment especially when paired with Rifled Barrel, effectively doubling the damage output when both triggers are pulled. Akimbo can also effectively increase the rate of fire by alternating between guns after each shot, which can prove useful when engaging multiple enemies.

The M.2187 can be obtained from the Magic Wheel on Zombies in Spaceland, Rave in the Redwoods, Shaolin Shuffle and Attack of the Radioactive Thing, and can be found on the wall for 1250 points in The Beast From Beyond, outside the theatre next to Racing Stripes. Performance is nearly identical to the S-Ravage, with high damage killing in one hit until the teen scenes. Range is also long, with shots from this weapon being able to hit zombies a good distance away. Rate of fire, however, leaves something to be desired, and missing several shots in a row can be detrimental. The main difference between the M.2187 and the S-Ravage is that the M.2187 reloads through a magazine, and can be used with the Akimbo attachment, allowing the player to effectively double their fire rate, at the cost of some damage (5 pellets per shot, opposed to 8 without akimbo), while also gaining more ammo. When upgraded, the weapon becomes the JackOAttack gaining a large amount of ammo as well as increasing damage. 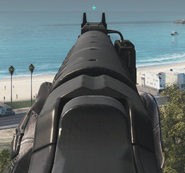