In the campaign, the magazine holds seven shells with up to 70 shells in reserve, which are loaded individually. It can be found in "Hunted", "Safehouse", "Ultimatum", "All In", "No Fighting In The War Room", and "Mile High Club".

The M1014 has a number of distinctions likely to preserve game balance. The M1014 has a relatively small ammo capacity, four shell capacity, compared to the W1200's seven shell capacity, and a long reload time. The regular reload time of the M1014 exposes a defenseless player in the event that the entire four-shell magazine fails to kill an enemy or additional enemies appear. The lengthy reload time can be greatly reduced with the use of the Sleight of Hand perk. As with the W1200, the M1014 will not be able to inflict damage beyond a certain range.

Like all the other weapons in game, both of the shotguns can unlock camouflage patterns. Digital Camo for the M1014 can be unlocked after 25 headshots, the same as all other weapons in game. Blue Tiger Camo and Red Tiger Camo are unlocked at 50 and 100 headshots, respectively, different from the 75 and 150 headshots needed to obtain these camouflage patterns for all other weapons aside from the W1200. In Call of Duty 4: Modern Warfare, The M1014 is also one of the golden weapons available after completing all Marksman and Expert shotgun challenges. This exclusivity is removed in Call of Duty: Modern Warfare Remastered as all weapons can equip Gold Camouflage.

The M1014 appears in Old School Mode with 4 shells loaded and 16 shells in reserve ammunition.

The M1014 is the only shotgun in the Nintendo DS version of Call of Duty 4: Modern Warfare, and as such, is used by all factions. The NDS version of the M1014 looks similar to the M1014 on the consoles, but does not have the green dots on the iron sight. The M1014 is semi-automatic as well, but it has an incredibly low Firecap, comparable to the rate of fire of a pump-action shotgun. Despite this limitation, the M1014 has several unique advantages not seen on other shotguns. First of all, its pellets have unlimited range, though they will spread apart as the range between the player an the target increases. The spread eventually stops after a certain distance, though it is still spread apart enough to eliminate its one-shot kill ability. The pellets also spread in the same pattern each time. This allows the player to expend all eight shells to make a kill at long ranges, but on a moving target it is just a waste of bullets as it's near impossible to achieve a kill as the opponent can counterattack or hide. The qualities of the M1014 makes it excellent for all ranges, though it is recommended to keep an assault rifle or submachinegun as well. Even though the M1014 is an excellent weapon, it is only recommended for close ranges in multiplayer. Otherwise, the player can be easily outgunned by long range weapons, such as assault rifles (M16A4, AK-47), or SMGs (MAC-10, MP5). The game files curiously name the weapon the "M90"; an apparent contraction of "Benelli M4 Super 90".

The M1014 is used by the U.S. Army Rangers, Task Force 141, Shadow Company, and the U.S. Navy SEALs. In the campaign, the magazine holds seven shells loaded individually, and can have up to 70 shells in reserve. In missions such as "Takedown", it is useful for close quarter engagements due to its high power.

The M1014 returns in Call of Duty: Modern Warfare 2, and is unlocked at Level 54 in multiplayer, and can be equipped as a secondary weapon like all other shotguns. A silencer can now be attached. It lacks the spare shell holder on the side, and has a flashlight mounted under the barrel which is purely aesthetic.

The M1014 is rarely encountered in multiplayer games due to its high unlock level. However, there are no serious drawbacks, aside from the magazine size. At only four rounds, it is very easy to spend the entire magazine even with the low fire-cap. Reloads are somewhat sluggish, as shells are inserted individually. This can be remedied with either the Sleight of Hand and/or the Extended Mags attachment.

Compared to the other shotgun secondaries, the M1014 has a smaller magazine than the AA-12 but counters it with a greater one shot kill chance, longer range, and slightly more reserve ammo.

While the Spas-12 has a longer range than the aforementioned shotguns, and also has a greater chance for a one-hit-kill, its pump-action nature is slow and can be costly if the target isn't killed in the first shot.

The Grip will reduce recoil when firing, but due to the low fire cap the gun will usually settle between shots and it does not grant quicker swap times like the AA-12. Optical attachments such as the Red Dot and Holographic sights, are little more than decorations for the M1014 as the ranges at which it is possible to hit your target are too close quarters to warrant aiming down the sight.

The Silencer grants the benefit of staying off the Radar, but reduces the M1014's range to roughly the same as a Commando lunge. Unlike the Striker or AA-12, the M1014 cannot make up for this range loss with magazine capacity or rate of fire, so the silencer should be avoided entirely, with a possible exception of Hardcore gamemodes.

Cut menu icon. It is the same as the one featured in Call of Duty 4: Modern Warfare 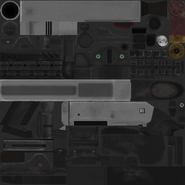