Call of Duty Wiki
Register
Don't have an account?
Sign In
Advertisement
in: Call of Duty: Modern Warfare 2 Armored Cars

The M104 Wolverine Heavy Assault Bridge is an armored combat engineering vehicle designed to provide deployable bridge capability for units engaged in military operations. It appears in Call of Duty: Modern Warfare 2 and is simply an M1A2 Abrams tank with the turret removed and replaced by a folding bridge.

A Wolverine is seen parked on the airfield in the level "S.S.D.D." loading a foldable bridge onto itself, though it is unreachable by the player. It makes one more appearance in the mission "Team Player", where it must be protected from enemy fire while it sets up its bridge on a broken overpass that leads to the inner areas of the urban area. Once completed, the player, while in a Humvee, moves across the bridge along with the rest of the Rangers. 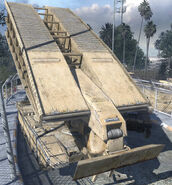 Wolverine with its bridge folded, in "S.S.D.D."
Community content is available under CC-BY-SA unless otherwise noted.
Advertisement