A M113 APC called "Bottom Feeder" appears in the campaign level "The Defector" with a mounted M2 Browning Machine Gun. Also, during the beginning of the level "S.O.G.", Mason, Hudson, and Woods pass by multiple M113s while riding in a Jeep through the military base at Khe Sanh when the NVA and Viet Cong attacked. In the trenches, one can see several M113s in the trenches above. The gunners in them can be killed, but the .50 cal machine gun will continue firing. Later in the game, a damaged M113, named "The Outcasts," falls over a trench blocking Mason's path, forcing the player to go prone and crawl under it.

M113 APCs are used by U.S. Army Rangers in Panama to unload and support troops in the mission "Suffer With Me". They are destroyed fairly easily by the Panamanian Defense Forces.

Another view of Bottom Feeder. 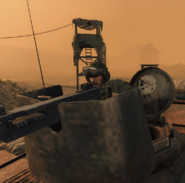