The M1216 (or SRM 1216, as called in the game files) is an automatic shotgun featured in Call of Duty: Black Ops II, Call of Duty: Strike Team and Call of Duty: Mobile. It is unique in the fact that it has a "rechamber" every four shots, but is technically a full-auto shotgun.

"Fully automatic shotgun with a rechamber every 4 rounds."
— Description

The M1216 is used by Section in "Odysseus" as his secondary; it is also used by the Mercs and Navy Seals.

The M1216 is the last shotgun to be unlocked in multiplayer at level 52. It is the only fully-automatic shotgun in the game, but it also deals the lowest damage of any shotgun. Its fire rate is the same as the S12's firecap, but requires little effort to achieve. The M1216 also boasts the highest magazine capacity in its class, firing 16 shells before reloading.

Being a fully-automatic shotgun with low damage and range, the M1216 can undergo vast performance changes depending on the attachments equipped. The Long Barrel will allow the gun to keep maximum damage at longer ranges, making one-hit kills more frequent; however, the 16% range increase that the Long Barrel provides is of very minimal benefit with the M1216 considering how poor its range is to begin with. Because of this poor range, the Suppressor's range penalty is the least out of any shotgun, and is a viable choice also due to the fast rate of fire. Because the minimum damage on the M1216 is 48 (if all pellets hit), a player can be killed within one 'burst', provided enough pellets hit. A more logical option instead of the Long Barrel would be to carry a Handgun (excluding the Executioner) or Crossbow secondary to deal with longer range engagements that the M1216 simply can't handle. Another sensible choice would be to use the Overkill wild card to pair the M1216 with a long range primary weapon. A Laser Sight and Extended Clip or Fast Mag can be useful for rushing, as the player can simply sweep a room by hip-firing and quickly reload. The use of Adjustable Stock is questionable, as it generally helps at close quarters, so its effect on shotguns is very low compared to other guns. While the iron sights on the M1216 are clear, the MMS can help to detect enemies before advancing into an open room, although they will need to be standing still to be detected. This, along with having poor range, makes using optical attachments with the M1216 a waste of a Pick Ten point.

The M1216 can be purchased out of the Mystery Box for 950 points; with Mob of the Dead being the only map not to feature the M1216. When Pack-a-Punched, the M1216 becomes the Mesmerizer. Its magazine capacity is increased to 24 and its four round burst increases to six. After being Pack-a-Punched, this weapon has the ability of killing zombies in one shot up to around round 30 with Double Tap Root Beer at close range, and two shots at medium range. Pack-A-Punching it again will either add a Reflex Sight or Long Barrel. One may want to consider this gun as an emergency gun when swarmed as it has a lot of ammo and a high rate of fire and has no splash damage compared to the Ray Gun. As an added bonus, zombies killed with the Mesmerizer will turn into a bloody mist, quickly clearing the way for an escape. Flaming zombies do not explode when killed by this, making it a useful weapon in Green Run. In the game mode Turned, it is the second weapon to be obtained if the player is a human. In Origins, it can also be dug up with a Shovel. 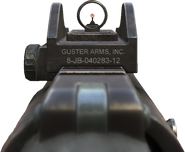 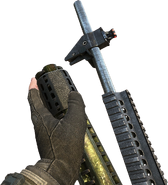 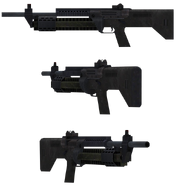 The Mesmerizer in first person

16 shells
(20 and 28 shells with ammunition attachments)

The M1216 returns in Call of Duty: Mobile as the HS2126. The difference compared to Black Ops II are its model differences and that it functions as a burst-fire shotgun, as each pull of the trigger automatically fires four shots.

The HS2126 deals rather low damage per shot, however with recent damage buffs, it is able to one-burst enemies at close range, and an average of two-bursts when shooting at enemies 10m or further. It has wide hipfire pellet spread, allowing the players to make more accurate shots on enemies. This can be further improved with FF Birdshot, which adds more pellets per shot while slightly decrease damage per shot. The gun also has very heavy recoil while aiming down the sights.

The HS2126 was available in Battle Royale, but was removed in Season 9. It deals rather low damage to enemies at ranges further than 10m, which makes the weapon extremely ineffective against enemies with automatic firing weapons. It is now only available as customized blueprints which can be retrieved at the Aidrop.

The original HS2126 model, prior to the Season 9 Conquest update.