For the assault rifle variant, see MK14.
For other rifles, see M14 and M21.
For a reimagined version in Black Ops 4, see SDM.

It is seen multiple times in the campaign in "S.S.D.D.", "Wolverines!", "The Only Easy Day... Was Yesterday" during the ending stage of the mission, "The Gulag", "Contingency", "The Enemy of My Enemy", "Of Their Own Accord", and "Museum". Soap is also seen using it on "Cliffhanger" to give Roach support when he is infiltrating the base. It can also be seen on the hands on Archer and Toad in "Loose Ends".

The M21 EBR is semi-automatic. Like other semi-automatic weapons in the game, the M21 EBR lacks a firecap. As such, the M21 EBR can fired as fast as the user can manage, up to a theoretical limit of 1200 RPM. No limit on the firecap allows the M21 EBR user with a quick trigger finger to lay down a lot of fire.

The M21 EBR's accuracy is unrivalled in the sniper rifle class. Its recoil is remarkably small for a sniper rifle, nearly on par with assault rifles with regards to recoil per shot. There is a caveat to this accuracy, in that the M21 EBR has the second lowest centerspeed in its class at 750. While the recoil per shot may be very low for sniper rifle standards, shooting quickly will cause the recoil to climb.

The M21 EBR's handling traits are good for a sniper rifle. Like all other snipers, users move at 100% of the base speed, move at 40% speed when strafing, takes 400 milliseconds to aim down the sight, and has terrible hip-fire accuracy. The M21 EBR has the fastest switch speeds in its tier, and the reloads are very quick, taking 1.89 seconds to perform a Reload Cancel. Overall, the M21 EBR has great handling.

The M21 EBR is tied for the largest magazine capacity in its class, with ten rounds per magazine. This is a deceiving number, however. As the M21 EBR regularly needs two shots to kill, the ten round magazine can be depleted in short order. The M21 EBR gets a thirty round starting ammo loadout, which isn't terribly large for a sniper of the M21 EBR's power.

The M21 EBR has the standard assortment of attachments available. Of all the sniper rifles, the Silencer is perhaps the best fit on the M21 EBR. It simply loses the one headshot kill, and gains all the stealth benefits.

The M21 EBR is also very well equipped to use the ACOG Scope. The M21 EBR's very low recoil makes it very capable of being used at longer ranges, but also makes the M21 EBR easier to use at medium ranges as well. The ACOG Scope will transform the M21 EBR into a battle rifle of sorts. The issue with the ACOG Scope is that the idle sway cannot be steadied. Use this attachment with caution.

If in doubt over what attachment to use, FMJ is never a bad option. FMJ makes the M21 EBR even more effective at shooting through walls.

Extended Mags gives the M21 EBR a 50% increase in magazine capacity, boosting the M21 EBR up to fifteen round magazines, and splitting the ammo loadout between just two magazines. This attachment makes reloads less frequent and is never a bad choice.

An unscoped M14 EBR with iron sights is available in the mission "Breach & Clear". This is the only time in the game where this weapon can be used without a scope. Although it is unscoped, it retains a relatively large amount of idle sway. The iron sights have the same amount of zoom as an ACOG Scope. The recoil is purely visual, having no effect on the accuracy.

The M14 EBR with a Silencer in third-person view

The M14 EBR without its default scope in third-person view

The M14 EBR makes an appearance in Call of Duty: Modern Warfare 3; it is available in three campaign missions. In "Back on the Grid", Yuri uses a silenced M14 EBR with Variable Zoom. In "Goalpost", four M14 EBRs with a sniper scope and can be found and used; the model of this one differs from that of the variable zoom by having a slightly taller rail underneath the scope, and the third-person view of this variant is that of the Modern Warfare 2 model. In "Bag and Drag", it is possible to find a M14 EBR by the fallen GIGN soldiers. "Scorched Earth", the player has an M14 EBR with Variable Zoom as part of their starting weapons, and another one can be found within the level with the same attachment.

The M14 EBR is available in the downloadable mission "Arctic Recon" on the mat near the spawn point. In this mission it is unscoped, and has no auto aim, despite being unscoped, similarly to the Call of Duty: Modern Warfare 2 mission "Breach & Clear".

The M14 EBR is not available in multiplayer or Survival mode, and is instead replaced by the MK14.

Yuri cocking his M14 EBR in "Back on the Grid"

The M14 EBR in third person with a silencer

Semi-automatic
The M14 EBR appears in Call of Duty Online, labeled as the M21 EBR.

The M21 EBR in first person

The M14 EBR appears in Call of Duty: Ghosts under the name MK14 EBR. It is now classed as a marksman rifle rather than a sniper rifle.

The MK14 EBR is found with its standard scope in the level "Brave New World", before the massive concrete wall. It also appears in the mission "Homecoming" in the weapons cache, with an ACOG Scope.

The MK14 EBR has a low fire rate and high damage. It has the highest maximum damage in its category, but as a downside it doesn't have any damage multiplier to the neck, unlike other Marksman Rifles. Like the other marksman rifles, the MK14 EBR boasts a fast time to kill, but its slow rate of fire and moderate recoil can make close range engagements challenging. This makes the MK14 a good choice for shooting through objects, especially when using Armor-Piercing, and it will also more easily dispatch enemies who might already be injured slightly. One drawback is its smallest magazine size at 18, smallest in its category, tied to the IA-2 and the SVU, which may increase the need for Extended Mags or Sleight of Hand.

It has very high range, beaten only by the SVU due to its perpetual two shot kill nature. As such, it benefits greatly from both the Muzzle Brake and Silencer attachments; it will attain a greater increase to its two shot kill range than other weapons in its class, while the reduced range when using a silencer is not as severe.

The MK14 EBR's damage allows it to effectively one-shot headshot an enemy before and during the damage dropoff (maximum of about 37 meters without a barrel attachment), making it a preferred weapon amongst sharpshooters, similarly to its brother in Modern Warfare 2. This also makes the Crocodile Camouflage easier to obtain, as the first hit to the head will most likely be your only bullet needed. If one wants this one-headshot kill range to occur very often, it is highly advised to use Muzzle Brake attachment.

In conclusion, the MK14 EBR is a deadly mid-range weapon that can go up against many other players with relative ease, able to fit the needs of many players who use it; however, it is statistically beaten in many categories: It has the second-lowest firecap (beaten by MR-28 and IA-2), only the second-largest range (beaten by SVU), and doesn't have the most manageable recoil in the category (beaten again by MR-28), and drops off to a slow 3-shot kill at extreme ranges, and combined with the low firecap, makes a very slow time to kill, which makes its alternatives the better choice in many situations.

Like other Marksman Rifles, the MK14 EBR has 15% less recoil when using the default scope.

The MK14 EBR appears in the map Awakening and Exodus (Extinction). It costs $2000.

The MK14 EBR in first-person view

Aiming down the scope of the MK14 EBR

The MK14 EBR with Iron Sight

Render of the MK14 EBR's model 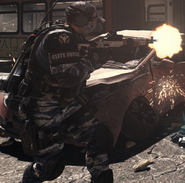 10 rounds
(15 and 20 rounds with ammunition attachments)

Unlike other sniper rifles in the game, this gun cannot do one-shot kills. It needs 2 shots to kill a full health enemy, therefore it is a rather hard gun to master. It can only score a one-hit kill when hitting headshots, which is extremely challenging, or when the gun is used in hardcore mode. It is also rather sluggish and has low ADS speed.

The M21 EBR was featured in Battle Royale. It has a high rate of fire but low damage output. It was one of the two sniper rifles that could use Light Trigger Mods, which allowed it to fire in a slow fully-automatic fashion, but this mod got removed. The gun was removed in Season 9. It can now only become available for use as a customized Arsenal blueprint.

The M14 EBR returns in Call of Duty: Modern Warfare as the EBR-14 marksman rifle. It is manufactured by FORGE TAC.

The EBR-14 in first person.

The default Iron Sights of the EBR-14.