For the agency of a similar spelling, see MI6.
For other variants, see M16A1 and M16A4.

The M16 is fully-automatic in the campaign, similar to M16A4 in Call of Duty 4: Modern Warfare. It is the starting weapon in "Operation 40", where it is equipped with an ACOG Scope and M203 Grenade Launcher. Also, a supressed M16 is seen in the hands of Carlos; M16s equipped with ACOG Scopes are held by Frank Woods, Joseph Bowman, and many other CIA agents throughout the mission as well. It is also the starting weapon in "S.O.G.", where it is equipped with a Masterkey. It can be found throughout "S.O.G." with different attachments. An M16 can also be found in "Crash Site" off the bodies of dead teammates. Overall, the M16 has low recoil, a high rate of fire, and medium damage.

The M16 is a free weapon unlocked in one of the default classes at level 1, equipped with an ASP, and with the perks Scavenger, Steady Aim, and Second Chance.

The M16 is a higher damage weapon. One whole burst will usually suffice, but at longer ranges, an extra bullet may be required, thus an extra burst. The headshot multiplier allows for one less bullet, allowing for one accurate burst to kill an enemy from afar. This high damage is offset due to the M16 having the lowest "overall" RPM of all assault rifles, at a measly 459 RPM. The bullets shot in one burst will fly at 937 RPM. Both of these speeds are slower than the G11. The M16 has regular penetration.

In the accuracy department, the M16 is generally deemed inferior to the G11, and in general, accuracy is decent. The iron sights can confuse some users, and the recoil is high enough to throw off aim with consecutively shot bursts. Allowing a window of delay between bursts will allow this recoil to settle.

Handling of the M16 remains normal. ADS time is on par with the other assault rifles, and the hip-fire spread is a moderate size. However, the M16 has a very fast reload time, at 2.03 seconds regular, or 2.36 seconds for an empty reload. Reload cancelling can further hasten this already swift reload.

The M16 has the usual assortment of attachment options. Optical attachments can work very well with this weapon. For regular engagements, the Red Dot Sight or the Reflex Sight will serve better at medium range if the user dislikes the iron sights. The ACOG Scope works better at long range, and strangely, will reduce recoil instead of increase it, making it extremely accurate as a marksman-infantry hybrid weapon. The Infrared Scope, like the ACOG, actually decreases recoil and spread even further, effectively turning this weapon into a 3 round burst sniper. Keep in mind though, that Ghost Pro users will not show up on the scope, blending into the background..

Due to the M16's nature, Extended Mags and Dual Mags are often not as viable on the M16, as the M16 isn't hard-pressed for ammunition like the FAMAS or AUG, and the M16 doesn't necessarily chew up its magazine. If another attachment is needed, it's not recommended to use these over the other attachment.

The Suppressor will cut down on the M16's range, resulting in more hitmarkers compared to without. However, a player that finds themselves shooting more than 1 burst most of the time on an enemy will find minimal drawback from this attachment.

The underbarrel attachments are available, and can work very well on the M16 if close range prowess is wanted. The Masterkey and the Flamethrower prove to be very deadly up close. The drawbacks to both of these attachments should be considered, such as the Flamethrower being rendered useless against a Flak Jacket pro user, and the Masterkey's very slow time to kill if the first shot misses. Also keep in mind that you cannot combine this with any other attachment with Warlord nor replenish neither of these attachments with Scavenger.

The Grenade Launcher will give a good medium-range weapon capable of clearing rooms or objective points with relative ease. However, its high cost, the inability to combine attachments with Warlord, and that you only get 2 grenades to use which cannot be replenished with Scavenger , make its use less popular.

In conclusion, the M16 is a very versatile weapon at medium ranges. What it lacks in close quarters combat, it makes up for it with great viability at gunfights from afar, and that the M16 is a free weapon to use. These aspects alone make it a commonplace weapon for players who prestige, and with players who just start playing the game.

The M16 is available in Zombies, it can be bought off the wall for 1200 points. Similar to Multiplayer it is a three-round burst weapon. Due to its burst nature, it can deal respectable headshot damage until around round 10, where it starts to lose its effectiveness rather quickly. Ammunition can be purchased from off the wall, and may be a common occurrence to do so, as the M16 only comes with 120 bullets to fire, alongside its low damage, which further encourages players to shoot more bullets.

When upgraded in the Pack-A-Punch Machine, it becomes the "Skullcrusher". It becomes fully automatic, allowing it to shoot at a rapid 937 RPM. It also gains an M203 Grenade Launcher, which is very effective for clearing out crowds of enemies. The M203 can have a maximum of up to 9 grenades in reserve (these are affected by Max Ammo pickups). Damage is also increased by a modest amount. Overall, the Skullcrusher has a lower damage output compared to other Assault Rifles, but the addition of the M203 can prove as a valuable asset. 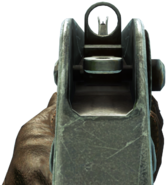 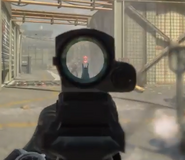 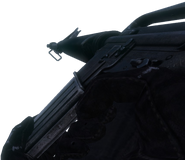 Diving with the M16

The M16's render on Call of Duty ELITE

The M16 as seen in the Black Ops Customization trailer

The M16 in third person 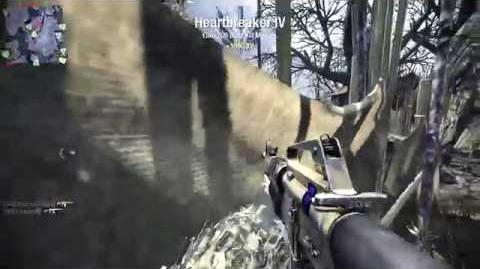 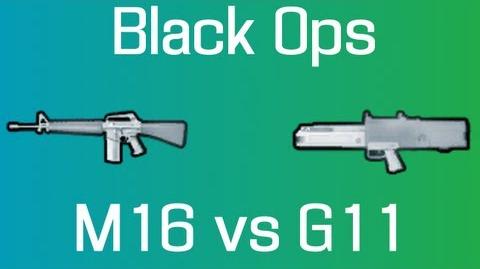 The M16 can be found in the hands of enemies in several missions. Although it is burst fire when used by the player, it is fully automatic when used by enemies. Its first appearance is in "Checking Out" where it is used by Viet Cong units.

"Also returning to Call of Duty – the M16! This three-round burst Assault Rifle offers a little more damage than the ARX-160, but adds a slightly longer delay between bursts. It’s a great weapon to use on long sight-lines, just don’t get caught off guard from someone flanking you, and be prepared with a solid secondary weapon if they get too close. Like the AK47, the M16’s base weapon will be unlocked for use in Create a Class once you receive a variant in a Supply Drop or Advanced Supply Drop. Be on the lookout for the stats of the five unique variants when they release on Xbox One next week!"
— Sledgehammer Games description

The M16 returns in Advanced Warfare. It was first introduced to Xbox One players on September 1, 2015. In order to unlock the base M16, players must receive a supply drop variant first.

The M16 has high damage per burst, but has the slowest rate of fire of any burst-fire assault rifle. It is best suited for long range combat, handling well with careful aim and patience. The M16's iconic iron sights are very obtrusive on part of the carrying handle, so optical attachments are optimal for target acquisition at a distance.

"Semi-automatic with three round burst fire. Effective at medium to long range."
— Description

It sports very high damage, as it is tied with the KN-44 for the third highest damage in-class, being bested only by the Sheiva and the MX Garand.

Where the M16 really shines is its range. It deals 40 damage up to 50 meters, which means it will kill all enemies in one burst within a 50-meter radius. It will need two bursts to kill from anything above 50 meters. Therefore, Long Barrel is one of the best fits, as it can kill any enemy within 100 meters.

The iron sights are rather clear, however, a Reflex Sight or an ELO can allow for a rather better peripheral view.

Rapid Fire is a very strong attachment on this weapon. Grip is not necessary, however, it can further improve its already impressive accuracy.

When upgraded in the Pack-A-Punch Machine, it now becomes the Skullpiercer, a change on the original name. Unlike the original Skullcrusher, the Skullpiercer does not come equipped with a Grenade Launcher and the burst-fire mechanic is changed to auto-burst, similar to the XR-2 in multiplayer. However it can be placed into the Pack-A-Punch Machine multiple times and receive upgrades like any other weapon in Black Ops III Zombies, negating the new disadvantages. 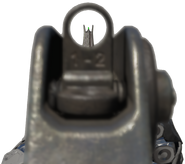 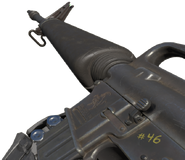 Picking up the M16

The Skullpiercer in Black Ops III

"3-round burst tactical rifle. Improved damage and accuracy with a longer delay between bursts."
— Description

The M16 was added to Call of Duty: Black Ops 4 with the Operation Apocalypse Z: Survivors event, being added to the Reserve Cases along side the Havelina AA50. It now appears under the Tactical Rifle weapon class, and comes with low reserve ammo.

The M16 is available on all maps via the Mystery Box for 950 points. When Pack-a-Punched, it becomes the Skullpiercer gaining increased damage and a base magazine increase to 55 rounds and maximum reserve ammo of 450.

Inspecting the side of the M16 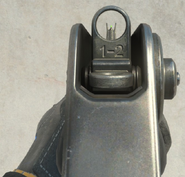 "Semi-automatic with three round burst fire. Effective at medium to long range."
— Description

The M16 returns in Call of Duty: Mobile.

The M16 has high damage, but low overall rate of fire due to it being a burst firing weapon. It can one-burst kill at close to mid range, however, due to the inconsistency of damage to the lower body and the legs, one burst kills cannot be achieved very often, unlike in other Call of Duty games. It loses this ability at long range, after 26m. However, this can be fixed by putting long barrels on the gun to increase its range. The gun has a long delay between bursts, leaving the player incredibly vulnerable after failing to one-burst enemies. Its iron sight is rather obtrusive, so a sight is recommended on this gun.

The M16 sports high damage and range, but low rate of fire. However, it does have very good hipfire spread, on par with some SMGs in the game. It comes as Rare and Epic blueprints, however both of these were removed in Season 11. It can still be equipped as customized blueprints.

The M16 returns in Call of Duty: Black Ops Cold War and is now classified as Tactical Rifle.

When upgraded by the Pack-a-Punch Machine, it becomes the Skullsplitter, garnering increased stats. 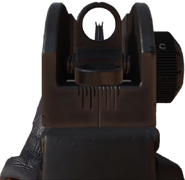 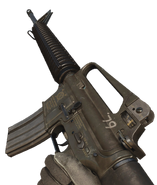 Inspecting the M16, note that the fire selector is correctly set to burst.

Inspecting the M16 via Weapon Flourish