In campaign, it can only be found in "War Pig". It is occasionally dropped (sometimes with the M203) by dead Marines. The M16A4 in Campaign is fully automatic, though the multiplayer version has a three-round burst. The M16A4 is also used by Lt. Vasquez.

If the Infinite Ammo cheat is enabled and an M16A4 is picked up with the M203, the fully-automatic rate of fire of the grenade launcher is very fast and greatly surpasses that of the M4A1, having a RoF of approximately 600 RPM. Curiously, the M203 on the M4 Carbine and the GP-25 on the AK-47 have much slower fully-automatic rates of fire, about 280 RPM.

In multiplayer, the M16A4 is available at level 1, in a default class. It can be fitted with a Silencer, Red Dot Sight, ACOG Scope, and M203 Grenade Launcher. It is worth mentioning that it has one of the fastest draw times of any weapon (0.35 seconds) (just faster than the G36C at 0.4 seconds), rivaling even the speed of sidearms. This means that switching to an M16A4 is nearly as fast as switching to a handgun, with arguably much more killing power.

It is often recommended to use this weapon from a distance, as it is not considered effective in close quarters combat. When fired from the hip while moving the M16A4 is wildly inaccurate. The M16A4 has a forced delay between bursts. This delay effectively lowers the rate of fire, meaning that at close range if the first burst misses, the user probably will be dead before getting off a second burst. However, Steady Aim shrinks the hipfire reticule to sizes comparable to SMGs, making the weapon fairly accurate from the hip, even while moving. Thus, even at close range, an M16A4 with Steady Aim and Stopping Power can still be very effective.

The M16A4 is exceptionally powerful because each bullet in the burst does 40-30 damage, meaning most of the kills will be from one burst without Stopping Power if the target is within range, or two bursts at farther ranges. When used with Stopping Power, the M16A4 is able to kill in one burst at any range provided that all three shots hit the target, and only two are needed at medium and close range, as long as the target is not behind a wall or using Juggernaut.

Double Tap decreases the delay between the firing of each of the three bullets in a single burst. With Double Tap, all of the rounds fired in a single burst are now fired with hardly any delay between shots. This can be somewhat useful in many situations, as there is a higher chance of all three bullets hitting the target and the shorter time between bursts makes the weapon more effective in CQB. However, Stopping Power is still considerably better as it will almost always kill faster while using less ammo. The only exception to this is in Hardcore, where Stopping Power has no effect on the M16A4, as it only needs one shot to kill from any range, assuming the target is not behind cover.

The M16A4 is widely considered to be one of the best assault rifles in the game due to its high power, low recoil, lack of sway, quick reload, high rate of fire per burst, and easy conservation of ammunition due to its burst fire.

The M16A4 appears in Old School Mode with 60 ammunition in a magazine with 30 reserve ammunition.

Reloading the M16A4.
Add a photo to this gallery

In the Nintendo DS version of Call of Duty 4: Modern Warfare, the M16A4 appears as one of the two assault rifles in game. The M16A4 bears a vague resemblance (though it can still be identified as a M16) to the one in the console versions, though it is fully automatic (like the M16s in Call of Duty 4 campaign mode). It has a much slower rate of fire, but it does more damage per bullet to compensate for this. In single player, the M16 is only found with a Holographic Sight, as opposed to iron sights in multiplayer. This does not matter, since the iron sights are just as accurate as the Holographic, and provide a better peripheral view. In single player, the M16A4 is most effective at long range, though it is still effective at close-medium range.

In multiplayer, it is only effective at long ranges. Its low rate of fire prevents it from being effective at close range, unless the enemy does not see the player. The M16A4 also has the third slowest melee speed, making it even less effective in close encounters.

Aiming down the Holographic Sight.

The M16A4 in Multiplayer.

Iron Sights.
Add a photo to this gallery

It is unlocked later on, at level 40, and has an identical reload animation to the M4A1. A rail has been added to the carrying handle, but goes unused. The rear sight aperture is thinner than the Call of Duty 4 version, which gives a less cluttered sight picture. Camouflage is now only applied to the rail covers, the stock, the magazine, separate optics, and the Heartbeat Sensor.

The M16A4 damage-wise performs identically to the FAMAS, having the same damage and multipliers, and the same rate of fire per burst. However, it has slightly faster damage drop-off, but has a faster reload time. It also has higher recoil, but using a Holographic Sight [1] lowers its recoil significantly, making it slightly more accurate at range than the FAMAS.

Reloading the M16A4.
M16 Alrevez.png
If the player puts their sensitivity on high and spin right, they can see that the right side of the receiver of the M16A4 is not present.

A Ranger being killed while holding a M16A4 with the M203 Grenade Launcher.

"The M16A4 fires highly accurate 3-round bursts for precision takedowns. Its semi-auto fire performs best in mid to long-range skirmishes where you have the time and space to carefully target enemies. A single burst kills if all three shots land, so it's best to attack from a stationary position to avoid straying off target."
— Call of Duty ELITE description

The M16A4 was first seen in Call of Duty: Modern Warfare 3's Special Ops Trailer. It fires in three-round bursts, like in previous games, but with a lower rate of fire. It is a starting weapon in Tier 4 Survival Mode maps, and is equipped with a Red Dot Sight.

The primary use of the M16A4 is in "Goalpost", where it is used by the dismounted crew of Rhino 2. The M16A4 is also used by Sandman in the mission "Iron Lady".

The M16A4 is unlocked at level 4 along with Create-A-Class, and retains its low recoil, fast reload and relatively long range, and can be customized with a wide range of attachments and proficiencies. The Red Dot Sight, Holographic Sight, and Hybrid Sight are good attachments, as they provide a much clearer sight picture when compared to the M16A4's bulky Iron Sights. Rapid Fire is also useful, as it increases the weapon's close range effectiveness and lowers its time to kill.

Compared to the other burst rifle, the Type 95, the M16A4 is less reliable in close quarters, requiring all 3 rounds to land from a burst to kill, but is more effective at longer ranges where the Type 95's damage drops much more drastically. However, since the M16A4 features slightly higher range than the Type 95, it can also more easily land one-burst kills at medium to long range. The greater recoil when compared to the Type 95 can cause bullets to stray off at these ranges, however, which may give the Type 95 the edge due to the quicker refire rate. The Kick Proficiency can remedy this, but out of long ranges is not necessary, making other proficiencies, like Focus or Attachments, a better option.

It should be noted that the Rapid Fire attachment does NOT decrease the time between bursts, and only increases the rate each burst is fired. The Marksman perk may be useful at long range combat and counter-sniping. Quickdraw can also come in handy, as firing first may prevent issues with flinching throwing bullets off target and causing the user to have to use another burst (provided they survive). Scavenger can also be effective, because despite being a three-round burst weapon, it can whittle through ammunition quickly and leave the user relying on their secondary weapon.

The M16A4 is available for both Survival and Mission modes.

The M16A4 is an alternate weapon in the Mission Mode challenge Stay Sharp.

The M16A4 is the starting weapon for Tier 4 (Insane) Survival Mode missions, along with the Five Seven, and is also unlocked by default from the Weapon Armory for $3000.

The M16A4 is a solid overall weapon for Survival, especially on maps where you will be trying to hold an area with long sightlines, due to its good accuracy and low recoil. However, as the rounds continue to increase, it would be of best interest to swap it for a higher powered weapon or a LMG, as it will take multiple rounds to kill enemies in later waves.

The M16A4 in third-person.
Add a photo to this gallery 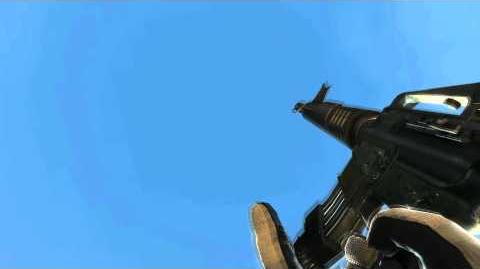 Retrieved from "https://callofduty.fandom.com/wiki/M16A4?oldid=1522780"
Community content is available under CC-BY-SA unless otherwise noted.