.8 for first shell, .6 for shells afterward

The M1897 Trench Gun is usable by every faction. It carries six shells in its magazine and packs a one shot kill at close or medium-close ranges. Because of a relatively tight eight-pellet spread, accuracy is not an enormous issue in the ranges that it is effective in. The slow ADS speed and poor sights discourage aiming down the sights; simply point in the direction of the enemy and fire. If they survive the first hit, it is best to quickly switch to the pistol and dispatch them instead of waiting to pump the action again.

The Trench Gun's only flaw is the slow pumping action after each shot. The player should always make sure they are feeling confident about one shot killing the target before firing, because the target may be able to kill the player while the player is pumping the action.

Interestingly, the M1897 does not have any damage multipliers; a pellet will deal the same damage regardless where it hits. This may be to prevent a single pellet from scoring an instant kill headshot at close range. 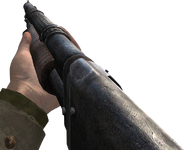 The M1897 Trench Gun (listed as Winchester M1897 in the Bonus Materials) appears in Call of Duty 3. Once again, it holds six shells and is used by the Americans and British in the campaign and both factions in multiplayer. In campaign, it is mostly seen being used by Leroy Huxley in most levels as it is his signature weapon. It is available during the missions "Night Drop", "Mayenne Bridge", "The Forest" and "Hostage!". When found in Mayenne Bridge it is simply called "Trenchgun", whereas in all other instances of the game it is referred to as M1897 Trench Gun. In multiplayer, it is only obtainable by playing as the Medic class. It is best used at close ranges only for a guaranteed one shot kill. At medium ranges, it can take up to four shots to kill an enemy player. It is less accurate than in other games so aiming down the sights is helpful as it reduces spread.

High without grip, medium with it

The M1897 Trench Gun is a pump-action shotgun and is often seen on the hands of Sgt. Sullivan. It can be used in the missions "Little Resistance", "Burn 'em Out" and "Relentless". Like all shotguns, it is useless at far range, but excels at close range, making it extremely effective in the mortar pits of "Burn 'em Out" and the tunnels of "Relentless". It is advised to conserve ammo as the Trench Gun is a very valuable weapon. It is given a Bayonet Lug whether it has a Bayonet attached or not, unlike in previous installments.

The Trench Gun is unlocked by default.

The Trench Gun's rate of fire is abysmally slow. Being pump-action, the Trench Gun fires at a lowly 73 RPM, just a tad slower than the PTRS-41. This means that, should the user need a follow-up shot, they will have to wait a long period of time before they can shoot again.

The Trench Gun reloads shell-by-shell. The first shell is loaded in 0.75 seconds and every subsequent shell takes 0.6 seconds to be loaded. When full, a 1.5 second long animation plays, but that can be skipped with a Reload Cancel.

The Trench Gun has two attachments on offer: the Grip and the Bayonet.

The M1897 Trench Gun appears in Nazi Zombies, obtainable from off the wall and the Mystery Box. It is very advantageous to use here due to its better ammo capacity, and a tighter pellet spread than the Double-Barreled Shotgun. It has a longer reload time, due to the individual shells being inserted into the magazine, which is its biggest disadvantage. After Round 12, it loses its one-shot kill ability; however, against the Hellhounds, the Trench Gun is always a one-hit kill.

In Der Riese, the Trench Gun can be upgraded to the "Gut Shot" via the Pack-a-Punch Machine, giving it more power, a capacity of 10 shells, and causing it to reload two rounds at a time. The Gut Shot focuses the pellets into a closer proximity, increasing the stopping power, making it an excellent backup close range weapon to have. This shotgun works best with Speed Cola and Double Tap Root Beer, making it a very fast and very powerful weapon capable of clearing massive crowds easier. However, the ammo count runs out three times faster than a normal Trench Gun without perks. In addition, the Gut Shot's guaranteed one shot kill to the chest ability will end around round 25 for zombies.

The Trench Gun in Call of Duty: World at War 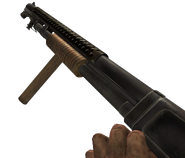 The Trench Gun appears as a Secondary Weapon in "Betio Airfield", and is found in other Pacific campaign levels. The Trench Gun can kill enemies in medium range as long as it is aimed at the chest.

The Trench Gun appears in Call of Duty: Zombies in all maps. It is available off the wall or out of the Mystery Box. It, along with its Pack-a-Punched version, functions the same as the console game.

The Pack-a-Punch version, the Gut Shot

It is statistically identical to its counterpart in Call of Duty: World at War.﻿

It is held as if it had a pistol grip, although it does not have one. This can be seen when cocking after reloading. 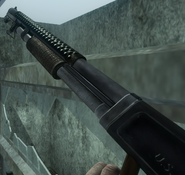 The M1897 Trench Gun (referred to as Winchester 1897 in the alpha and the private beta, and as M97 Trench Gun in the open beta) returns in Call of Duty: WWII, under the pseudonym Combat Shotgun.

The Combat Shotgun is a shotgun unlocked by default. It has the second highest capacity of all the shotguns with seven shells loaded as default, up to 10 with Extended Mags. It has an average pellet amount of eight, along with an above average one-hit kill range. The main advantage of the Combat Shotgun is its damage and capacity, only lacking in a slow reload time due to the requirement of manually reloading a single shell at a time. Like all shotguns, it benefits from Rapid Fire and Advanced Rifling.

The Combat Shotgun can be obtained from a Weapon Locker in the map The Final Reich for 1000 Jolts in the tavern and can also be obtained from the Mystery Box. The Combat Shotgun boasts high damage, being a one hit kill until the middle teen waves. With Kugelblitz, this can even extend to the early 20s. The Combat Shotgun boasts the highest capacity of all shotguns in Nazi Zombies, having eight shells, up to 12 with Extended Mags. While not the best for earning Jolts, The high damage and decent ammo reserves allow the Combat Shotgun to be a reliable single target destroyer; This is hampered by the single shell reload of the non Ubersprengen variant. When upgraded via the Ubersprengen, it becomes the Diplomatic Solution. Similarly to past pump action shotguns, it reloads two shells at a time once upgraded. Damage is increased, as well as ammo doubling to 16 shells in the tube, up to 24 with Extended Mags. One shot kills extend until the late 20s and early 30s.

The Combat Shotgun in first person.

Inspecting a side of the Combat Shotgun.

Inspecting another side of the Combat Shotgun.

The Trench Gun returns as the M1897 Trebuchet, appearing in Zombies mode. When Pack-a-Punched, it becomes the M9-TKG Home Wrecker, where it turns into a pump action grenade launcher with no ability to utilize sights. it holds 16 grenades and reloads four shells at a time.

The M1897 Trench Gun returns in Call of Duty: Vanguard as the Combat Shotgun.

The Combat Shotgun can be brought into any map via Create-A-Class, at Loadout rarity and can be found at any rarity via the Mystery Box for 950 Essence.