Call of Duty Wiki
Register
Don't have an account?
Sign In
Advertisement
in: Call of Duty: Modern Warfare Handguns

The M19 is a Corvus Defense handgun featured in Call of Duty: Modern Warfare.

The M19 is available for use in the campaign. Kyle Garrick's starting pistol in the mission Piccadilly is modeled after the "Dirty Business" blueprint from multiplayer. In Old Comrades, Captain Price picks up an M19 provided by Nikolai; his gun is mentioned as using .40 caliber hollow point bullets with a weight of 150 grains, Price's favorite. 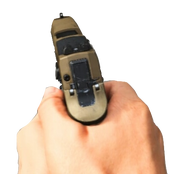 The M19 in first person

The default Iron Sights of the M19.