The M1 Irons is a DLC weapon in Call of Duty: Advanced Warfare. It is a revolver classified under Special Primary Weapons. It was released on May 5th, 2015 on Xbox Consoles, and was released for PlayStation Consoles, and PC on June 4th, 2015.[1]

The M1 Irons is a bizarre weapon when it comes to accuracy. Actual recoil is extremely low and is easily manageable due to almost no viewkick or gunkick, but the iron sights are inconsistent on platforms. On next gen consoles, the iron sights are very clear, but they may sometimes lack clarity for long ranges due to no zoom enhancement. The last-gen iron sights are more cluttered, as the tactical rail is placed on top of the weapon at all times, making it harder to aim the weapon as a whole. The aim-assist range of the M1 Irons is also extremely low, meaning that aim is mostly dependent on the player, and may cause more shots to miss than usual.

The M1 Irons has extremely bizarre handling traits. The weapon's raise time is extremely slow, at 700 milliseconds, as the player must go through an animation of swinging the weapon around their finger. However, the drop time is extremely fast, at 200 milliseconds. This makes it much more oriented to being used as a primary, and less so as a secondary (though one can use Fast Hands to alleviate this). The hip-fire cone is very small on the M1 Irons, and using the Akimbo attachment has little detriment to this extreme hip-fire accuracy. The M1 Irons reloads pretty fast, and its Reload Cancel speed is very fast. Speed reloading isn't as efficient due to how fast it is to reload cancel.

The M1 Irons' biggest weakness is its magazine capacity, limited to only six rounds. This severely limits its performance against multiple enemies, as Extended Mags is absent due to its revolver nature, and that reloads will be frequent. It is highly recommended to have a secondary for serial engagements, as the player is likely to be forced into a reload if using the M1 Irons against multiple enemies.

Placing the M1 Irons in the secondary slot by using the Overkill Wildcard allows the player to use it in a similar role to the revolvers in past games. When using it in this role, it is comparable to the RW1 since they are both high-powered pistols meant mainly for close range. However, the M1 Irons has less idle sway, which makes it better for long-range engagements than the RW1. The RW1, however, does not require the player to use Overkill, freeing up a slot for another wildcard or something else the player may want in their class, and it has a faster switch time than the M1 Irons, making it more reliable in some situations.

The M1 Irons has a unique assortment of attachments, due to its revolver nature. The optical attachments aren't immediately necessary, but can be useful in order to give the player a zoom advantage or extra clarity.

The Laser Sight is largely unnecessary, as the M1 Irons already has an extremely tight hip-fire cone to begin with. The Parabolic Microphone can be useful when playing in Core game modes, as it easily exposes players using a Suppressor.

Akimbo is a great attachment for the M1 Irons, as it retains its great hip-fire cone, and doesn't have a rate of fire penalty, unlike other pistols. This makes the M1 Irons' hip-fire performance double, and is accurate enough to be used up to medium range.

The Tactical Knife can be a very useful attachment if a player is forced to reload in heated combat, as it can help in getting a stab on the enemy.

Quickdraw Grip is a very useful attachment in order to swiftly aim the M1 Irons when necessary. This can put gunfights in favor of the player with relative ease.

In conclusion, the M1 Irons is an extremely potent weapon that can easily pick off stray enemies. In one-on-one situations, the M1 Irons can easily win a gunfight for a player. However, its small six-shooter magazine make the M1 Irons a terrible weapon to rely upon for serial engagements, as the player is near-guaranteed to be forced into a reload and have their life jeopardized.

The M1 Irons appears in the Exo Zombies map Carrier, and can be bought from the 3D Printer for 1000 points. It has integrated Akimbo attachment, along with 96 bullets as reserve ammo. 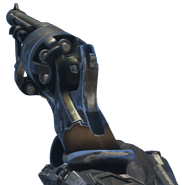 Retrieved from "https://callofduty.fandom.com/wiki/M1_Irons?oldid=2238659"
Community content is available under CC-BY-SA unless otherwise noted.