In Call of Duty 4: Modern Warfare’s multiplayer mode, all assault rifles except for the MP44 and AK-47 can be outfitted with an M203. The AK-47 uses the GP-25 Grenade Launcher, and the MP44 cannot equip attachments. The grenades it shoots are slightly weaker than fragmentation grenades, but they are also extremely accurate, fast-moving, and have a very little arc. Also, it does not need to be unlocked through challenges. For these reasons, it is generally looked down upon as unfair by many players when used in multiplayer. This attachment replaces Perk 1 in multiplayer. Even though leaf sights are present on both the M4A1 and the M16A4 when the M203 is attached, they are never used. Most likely this is to balance the accuracy between M203s with iron sights and M203s without.

If the Overkill perk is used and both selected weapons have the M203 (or the GP-25) grenade launcher, then the player will have four 40mm grenades (one in each launcher and two spare ones for reloads), except in the Wii version, which sets it at only three. Since the M203 is a weapon attachment, players cannot pick up more ammo for it by walking over a dropped gun with a grenade launcher attached (unless they currently have the empty attachment up while doing so, prompting a reload), except in Old School mode. It can be difficult to gain more ammo for the M203 without respawning.

The M203 appears in Old School Mode as an attachment on weapons found in sprites. The ammunition counts for the M203 remain constant from normal multiplayer.

The M4A1 with M203 Grenade Launcher and Holographic Sight in Singleplayer.

The M203 returns in Call of Duty: Modern Warfare 2. It is mostly the same as in Call of Duty 4, albeit with a different firing sound. In multiplayer, it is mostly the same except now it does not take up a Tier 1 slot. It is notable that if the player is at maximum ammo with the rest of their weapons and grenades (common when using Scavenger Pro), they must have the grenade launcher equipped to pickup more ammo with Scavenger. This can make picking up replacement grenades in combat troublesome if the player uses their grenade launcher first or exclusively. One Man Army alongside two Loadout Options with weaponry equipped with the M203 technically allow for infinite repeating use of the M203 as changing loadouts via One Man Army refreshes the grenade count.

It is interesting to note that in Single Player and Special Ops mode, the M203 only appears on the M4A1, M16A4, ACR and SCAR-H, but in multiplayer every assault rifle can mount it, barring the AK-47, which uses the GP-25.

Render of the fired M203 round.

The M203 is attached to Marcus Washington's M4A1 in Dead for a Day. 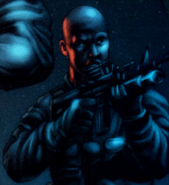 The grenade launcher returns in Call of Duty: Black Ops. It is seen mounted on the Commando assault rifle in nearly every mission it is available in. It was seen in the E3 demo of the game in the level "Payback". The grenade launcher can also be found mounted to several other assault rifles in single-player, such as the M16, FN FAL, Famas, etc. (but not the AK-47 or Galil which utilize the GP-25).

Treyarch has taken many steps to balance the M203; it costs 3000 CoD Points, which is more than most attachments and cannot be used with the perk Warlord, like all other under-barrel attachments. Its grenades are not replenished by the Scavenger perk and there are no explosive damage increasing perks like Danger Close, Fireworks, or Sonic Boom. However, the perk Flak Jacket returns. It also cannot be used for the first 15 seconds of the start of a round, to prevent players from shooting grenades across the map at the enemy spawn point. This applies for all grenade launchers. This grenade launcher is smaller than it appeared in Call of Duty: Modern Warfare 2.

When attached to most weapons, the weapon gains some visual differences, normally a heat-shield. When the weapon it is mounted on has camouflage applied, the very end of the M203 will have a lighter tint of the same camouflage. This has been confirmed on the Xbox 360 and PS3 version of the game.

The M203 is only available on the Pack-a-Punched version of the M16, the Skullcrusher. It has nine grenades at highest. It applies somewhat high damage until approximately round 11, where it loses its ability to kill with one hit (zombies will have their legs blown off on the first hit). One interesting note is that it does not have a 'safe distance', meaning that it will explode at any distance, making the PhD Flopper Perk-a-Cola to be highly recommended, as even if the player would survive the explosion itself, one will still be stunned for two seconds, and during that time the player will be very vulnerable to zombies' attacks.

The M203 first appeared in a screenshot of Black Ops DS, attached to an AK-47. The M203 Grenade Launcher is an attachment exclusive to the M16A1 and AK-47 assault rifles. 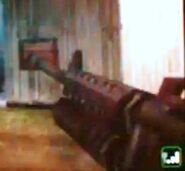 John "Soap" MacTavish uses an M4 fitted with an M203 during the assault.

The M203 returns in Call of Duty: Modern Warfare 3. Its power was reduced compared to previous titles, and now has a lethal radius of only 0.9 meters. It can only be mounted on the M4A1 and the M16A4, as most other assault rifles use a new grenade launcher called the M320.

The M203 is available for the M4A1 and the M16A4 upon reaching level 8, along with the other assault rifles. Scavenger does not resupply grenades, however, running over a dropped weapon that has the M203 equipped will give the player one grenade.

The M203 grenade launcher is available in Survival Mode at level 28 for the M4A1 and the M16A4 for $1500. The M203 can only carry two grenades, instead of the usual 11 in the campaign and Mission Mode.

The M203 returns in Call of Duty: Modern Warfare 3: Defiance.

The M203 is only available on the Pack-a-Punched version of the Colt M16A1, the Skullcrusher. Unlike in the first Black Ops, it has now a 'safe distance' in Zombies.

The M203 attached to the FAL

Single shot
The M203 returns in Call of Duty Online as the EGM.

The G37H with an EGM

Menu icon of the Remington A.C.R. with an EGM

The M203 appeared in the "Behind the Scenes Preview" video, where it was attached to a M4A1. None of them appeared in the final game; the M203 was replaced by the FN EGLM.

M4A1 equipped with a M203 in the Behind the Scenes video.

Two different visual models are used for the M203: one for most assault rifles available at the game's launch, and one (manufactured by FORGE TAC) for the rifles added in post-release updates.

The M203 mounted on an M4A1 in the multiplayer reveal trailer