The M240 is a mounted machine gun that can be seen on top of any M1 Abrams tank next to the M2 Browning Machine Gun. It is unavailable to the player.

Low-medium (without grip), Low (with grip)

"Keep hitting 'em with the Two Forty Bravos! Get more men moving on the left flank!"
— Marshall in "Whiskey Hotel"

The M240 "Bravo" (identified as such by Col. Marshall) is first seen used by American forces in liberating an Afghan city, and then by Makarov's terrorists during the attack on Zakhaev International Airport. The purpose for using Western firearms is apparently to divert suspicion from the Ultranationalists to a western perpetrator. It is also used by Ranger LMG gunners with various attachments such as the Red Dot Sight, ACOG Scope, or without attachments. In comparison to the MG4, the M240 has a much larger ammo capacity as well as the commonality of mounted optics, although it has a little more recoil.

Juggernauts will always use this weapon in Special Ops, carrying it as though they had a Foregrip attached. However, one will have no such attachment, usually finding an M240 with a Red Dot Sight, ACOG Scope, or Holographic Sight. The M240 also appears as a starting weapon for Armor Piercing. It is an alternate weapon in Bomb Squad, Homeland Security, Overwatch, Snatch & Grab, Sniper Fi, Body Count and Terminal. When used against Juggernauts, the M240 is very effective, capable of killing one with about a third of a magazine.

The M240 has mild recoil for a light machine gun, but enough to throw off aim at medium to long distances if firing full-auto. Because of this, the Grip is recommended. The weapon has slightly obstructive iron sights that are similar to that of the M16A4, the third fastest reload time for an LMG, low damage, and an extremely high rate of fire. Scavenger is a good choice as the weapon expends ammunition quickly, however as an LMG two one-hundred round belts is sufficient for most occasions. If used with both a Grip and Red Dot Sight, the M240 can be very effective at all ranges if burst firing is used effectively. The lack of damage drop off means it is most effective at long range, where it will still down a player in three shots with Stopping Power, or four without it in normal circumstances.

Because of the lack of damage drop off, using a silencer - with or without Stopping Power - is extremely ill-advised, as the Silencer is subject to a glitch and will not conceal the player's position on the radar, all the while requiring one more bullet to kill at all ranges. This does not render the silencer completely useless though, as it removes the muzzle flash when firing.

The M240 has low damage for an LMG, balanced with its extremely high rate of fire. The M240 excels greatly in Hardcore, where it delivers one-hit kills at any range at a very high rate of fire with some mild, easily controllable recoil. The high rate of fire and high capacity makes this weapon a premier choice for bullet penetration kills. The M240 suffers from very high muzzle flash when fired in full-auto. The Holographic Sight is a solution to both problems; the sight is elevated, therefore the player will see a notably lower amount of flash.

Stopping Power does not have a significant effect on the M240 due to the high fire rate, making other Tier 2 perks more viable options, such as Hardline for quicker killstreaks and Lightweight for getting to positions quicker and faster recovery after sprinting. The M240 is highly suited to providing a constant stream of suppressing/covering fire. Sleight of Hand Pro is recommended due to the longer sight raise time without the perk. It also performs quite well as an overwatch weapon with any optic plus a Grip with Bling, having moderate, mostly visual recoil that can down a target surprisingly fast, with or without Stopping Power. 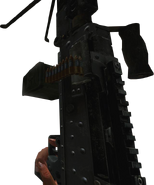 The M240 can be found and used in the Wii version during the mission "Goalpost", and is visually identical to its Call of Duty: Modern Warfare 2 predecessor. In other platforms, it is only seen in the mission "Blood Brothers" during the "No Russian" flashback, merely as a set-piece weapon that is not obtainable by the player (like the M1911), in the hands of Joseph Allen and Lev.

It can also be found on DLC Special Ops mission "Special Delivery" used by Juggernauts, more especially fired by the Modern Warfare 2 models. However if they are killed, they will not drop the weapon, and it'll dissapear instead, similar to the workers who use the Vector at the beginning of the mission.

The M240 was available in at least one build of the game, and can be seen in early screenshots of the game, however was cut from the final version for unknown reasons.

The M240 in early promotional art, seen with the Red Dot Sight.

The M240 as seen in a promotional screenshot.

The M240 in the Wii version of the game.

The M240 appears in Call of Duty: Ghosts as a mounted weapon on the M1 Abrams tanks. It can be used while controlling Badger-Two in the tank in "Severed Ties".

The M240 was cut from Call of Duty: Modern Warfare Remastered[1]. The weapon is usable and complete, indicating it was cut fairly late in development.