For other variants, see MK46 and Mk 48.
For similarly named weapons, see Chain SAW and M240.

"Fully automatic with a high rate of fire. Effective at medium to long range."
— Weapon description

In the campaign, the M249 SAW is used by the Special Air Service and the United States Marine Corps. The weapon is available in "Charlie Don't Surf", "The Bog", "War Pig", "Heat", "The Sins of the Father", and "Ultimatum". The M249 SAW is the signature weapon of SSgt. Griggs. It is far more effective than the RPD in Single Player, dealing the same damage at a much higher rate of fire, although ammo is harder to come across due to the gun's rarity.

In multiplayer, the M249 SAW is unlocked by default. It also appears on the Heavy Gunner default class.

The M249 SAW is a low damage LMG. It deals thirty damage per bullet in all circumstances. This will require four shots to kill at all ranges. The M249 SAW deals 42 damage on a headshot, needing just three shots to kill, only needing one headshot to reduce the shot threshold. Damage is the M249 SAW's biggest weakness relative to other LMGs, as it needs more bullets to get kills. In Hardcore, however, the M249 SAW's damage is much less of a concern, as thirty damage per bullet is enough to get a one shot kill at all ranges. The M249 SAW has high penetration power, allowing it retain most of its damage when shooting through walls.

The M249 SAW's damage increases notably with Stopping Power. It will deal 42 damage per bullet at all ranges, needing just three shots to kill. A headshot will deal 58 damage per bullet, needing only two shots to kill if just one bullet hits the head. The M249 SAW appreciates the extra damage greatly in Core game types, although its value is highly questionable in Hardcore.

The M249 SAW, like the other LMGs, has an excellent belt capacity of 100 rounds, and allows players to spawn in with 200 rounds total by default.

The ACOG Scope will provide an alternative, long range sight picture and increase the M249 SAW's aim down sight time to 300 milliseconds. However, this comes at the cost of highly inflated idle sway, in addition to the centerspeed being reduced to 1500. The M249 SAW is rendered much less accurate as a result, and despite being a long range oriented attachment, the ACOG Scope's aim down sight time improvement makes the M249 SAW more adept when on the move. The attachment provides plenty of risk.

The Red Dot Sight is the safest option of the three attachments available, providing no notable stat changes, but replacing the iron sights with a simple, electronic sight. Users who are not fans of the iron sights the M249 SAW has may find some use for the Red Dot Sight. For others, the Red Dot Sight is a safe attachment option, as it does not come at the expense of a perk slot like the Grip, nor does it highly reduce accuracy like the ACOG Scope does. However, it does not provide the notable stat improvements, unlike the other two attachments, leaving for a grounded, consistent attachment choice.

Overall, the M249 SAW is a surprisingly versatile weapon, especially when the Grip is equipped. When equipped with the Grip, the M249 SAW is a weapon that allows for accurate fire at all ranges and situations, and the weapon provides surprisingly good close quarters performance. The M249 SAW with the Grip is arguably the best LMG for a more aggressive LMG user, as the highly improved close quarters consistency and quicker reloads make the M249 SAW far more palatable in an aggressive role. The increased versatility that the M249 SAW provides also highly lessens the need for perks such as Steady Aim and Sleight of Hand, opening up the possibilites for players that like to use either of those two perks a lot on their LMGs. The M249 SAW also has a much more conventional recoil pattern than its peers thanks to the presence of a downwards recoil value. The M249 SAW can be a great alternative for players who want to use an LMG, but certain aspects of the RPD or M60E4 do not gel well with their style, needs, or desires.

The M249 SAW appears in Old School Mode with 100 rounds in the magazine and 100 rounds of reserve ammunition.

A US Marine fires his M249 in the singleplayer level The Bog.

In Call of Duty: Modern Warfare 2, the M249 SAW returns only as a mounted machine gun, in the level "The Hornet's Nest" and "Whiskey Hotel". In "Whiskey Hotel," there is a mounted M249 SAW to the left of Colonel Marshall that the player can use. Also in "Whiskey Hotel", there is one on top of the White House, accessible only through noclip, and one that no one is using that looks like a searchlight with a M249 behind it. The use icon of this M249 SAW is the same as that of an MG42. In another room there is one being used by a Russian, which will disappear if he is killed, although when he is using it you can as well. It will fire at a higher rate than normal and fire of its own accord. In addition to this on top of the West Wing of the White House, there are three M249's. Two normal ones being used by the Russians against the Ranger and another coupled with a searchlight.

Using cheats, a portable M249 SAW can be used in the Spec Ops mission "Armor Piercing" via the console command "give saw". Like any other console-spawned weapon, this weapon can only be spawned for use in a certain mission. It is also possible to get the M249 SAW on "Just Like Old Times" as well, though it is still mounted. It is on the catwalk where the player walks with the Riot Shield. If the Shadow Company soldier using it dies, it will disappear. Its appearance is identical to its Call of Duty 4: Modern Warfare counterpart. The pickup icon for the M249 is also used for other mounted machine guns, such as the M2 Browning Machine Gun.

The M249 is available as one of the three machine guns in Call of Duty: Modern Warfare: Mobilized along with its new jet-black finish, with the others being the M1919 and the MG4, though the M249 and MG4 are the only portable ones. Compared to its console counter-parts, the M249 performs in a similar fashion, having only a slightly lower rate and higher minimum damage. However, its sprinting speed is the same as all other weapons, something LMGs usually aren't capable of, though normal walking speed remains hindered.

In the campaign the M249 is first introduced in "Needle in a Haystack", the second American mission, though it doesn't see action for the rest of the US side of the campaign. On the other hand, the M249 is used a bit more frequently by British forces in the levels "Hostile Territory" and "Informant Extraction". It is generally a very effective weapon, killing most enemies in two shots, more on higher difficulties. However, one should take accurate shots with it, as it only has 100 rounds of reserve ammo, 200 rounds in total, which is considerably small for an LMG.

It is the last weapon unlocked in multiplayer for the Coalition faction, taking 500 kills as the Coalition to unlock. Unlike its single player counterpart, it takes four shots to kill. Despite this, its high rate of fire and lack of recoil make it a very effective weapon. However, the reduced movement speed is still a large problem for many players, so this weapon is rarely seen.

The M249 in Call of Duty: Modern Warfare: Mobilized

The M249 can be found by using "noclip" on PC in the mission Vorkuta in Call of Duty: Black Ops. It can be seen being used by the prison guards that fire on the escaping prisoners. If the guards stop using the M249, however, it will continue to fire by itself. When Molotov Cocktails are launched at the guard tower, the M249 machine gun is destroyed along with the Vorkuta prison guards. Its pick-up icon also briefly appears at the end of the mission S.O.G., when Mason enters the truck.

The M249 SAW does not make a proper return in Call of Duty: Modern Warfare 3. However, if using noclip, it is possible to see that the mounted PKP Pecheneg on the roof of Waraabe's compound in mission "Return To Sender" has the pickup icon of the M249 SAW and the same firing sound.

It is used by the U.S. National Guard and S.F.S.G. troops and is one of the starting weapons in the missions Running For Cover and Dam Approach. The M249 SAW is the only light machine gun used by friendly forces and is never dropped by any killed NPCs. The ammo for this can only be resupplied at ammunition boxes.

The M249 appears in multiplayer and can be unlocked with 500 kills in total.

Get 3 kills when the enemy is near smoke in 15 different matches.

"This air-cooled open bolt 5.56 light machine gun features a competitive rate of fire and excellent stability that will dominate the mid to long range battlefield."
— Description

The M249 SAW was added to Call of Duty: Modern Warfare during Season Three, under the name Bruen Mk9. It is manufactured by Tempus Armament.

The Bruen Mk9 in first person. 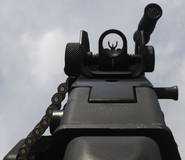 The default Iron Sights of the Bruen Mk9. 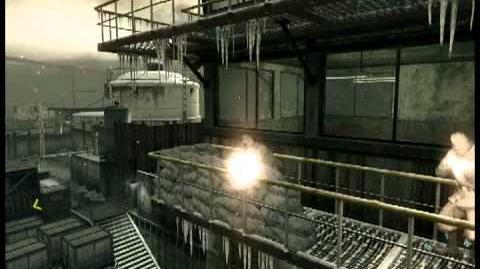 M249 in Black Ops Vorkuta
A video showing the M249 during Vorkuta
Community content is available under CC-BY-SA unless otherwise noted.
Advertisement