The M27 is the fifth weapon in the assault rifle category, and is unlocked at Level 31, alongside the Executioner.

The M27 is a low damage, moderate range assault rifle. At any range short of forty meters, the M27 will deal 33 damage per bullet, needing four shots to kill. At any range past forty meters, the M27 will deal 24 damage per bullet, needing five shots to kill, or two in hardcore game types. The M27 deals twenty percent extra damage per shot on a headshot. A headshot or even the slightest bit of chip damage dealt to the opponent will reduce the number of shots needed to kill by one at all ranges. The M27's damage per bullet is poor across the board. The M27 has medium penetration power, allowing it to retain a fair amount of damage when shooting through surfaces. Thin surfaces will not prove to be an obstacle, but thicker cover will remain impenetrable to the M27.

The M27's main selling point is its accuracy. The M27's iron sights are quite clear, and the recoil per shot is incredibly small. The M27 has recoil values of 35 to the left, to the right, and downwards, with a value of 50 upwards. This gives the M27 tiny horizontal recoil, and slight upwards recoil. The M27 has a centerspeed of 1550, which is decent enough. The M27 is accurate enough to fire fully automatically at almost any range, which allows users to compensate for the M27's lower damage.

The M27's handling characteristics are run of the mill for an assault rifle. The M27 allows users to move at 95% of the base movement speed, but only allow the user to strafe at 40% of the base movement speed. The M27 aims down the sight in 250 milliseconds, and the M27's hip-fire accuracy is decent. The M27's reload speeds are solid overall. The M27's reload animation is 2.03 seconds long, or 2.8 seconds long if the magazine is empty. The user can Reload Cancel in 1.4 seconds. Reloads will seldom be an issue on the M27.

The M27 has a thirty round magazine and a 120 round starting ammo loadout, both standard for an assault rifle.

The M27 has the usual assortment of attachments on offer.

The Reflex Sight and EOTech Sight provide an electronic substitute to the iron sights. The M27's iron sights are clear enough that neither of these attachments should be used, but since the M27's accuracy is its main selling point, users should use one of these attachments if they are not comfortable with the M27's iron sights. The EOTech Sight provides a higher zoom magnification than the default iron sights while providing an incredibly slight centerspeed increase.

The Quickdraw Handle cuts down the M27's aim down sight time to 150 milliseconds, allowing the user to aim much more quickly. The Quickdraw Handle is without downside and is very beneficial for a more aggressive M27 user, although a more defensive, stationary M27 user may find less purpose for this attachment.

The Adjustable Stock severely increases the M27's strafe speed to 88% of the base movement speed, only slightly slower than the M27's standard movement speed. This allows users to keep their sights raised while not compromising mobility, although the difference is so significant that it can be disorienting to users that are not accustomed with the attachment yet.

The Foregrip increases the M27's centerspeed from 1550 to 1581. The difference is so small that it is not worth using the Foregrip under any circumstance.

The ACOG Scope is a long range electronic sight that has a much higher magnification level than the iron sights. Given that the M27 is very accurate, the ACOG Scope can be put to great use on the M27.

The Target Finder is another long range electronic sight that indicates enemies with a red diamond overlay, helping with target acquisition, especially those who are obscuring themselves behind cover. Cold-Blooded users won't be highlighted though, and the Target Finder blocks out a good deal of peripheral vision, which can highly reduce situational awareness.

The Laser Sight will tighten the M27's hip-fire spread immensely, making hip-fire far more accurate and precise. The M27 is a rather weak weapon in CQC, and a Laser Sight won't necessarily fix that.

Select Fire allows the M27 to fire in three round bursts. In addition to pacing the M27's fire rate, the centerspeed is increased to 1650. This attachment is completely unnecessary on the M27. The M27's biggest niche is its ability to fire fully automatically at long ranges without fear of drifting off target. The M27 does not need Select Fire or its centerspeed increase.

FMJ increases the M27's penetration power and allows it to deal more damage to scorestreaks. With FMJ equipped, the M27 can shoot through walls with much more efficiency, and the M27 will be able to dispose of things like Guardians, Sentry Guns, and A.G.R.s more quickly.

The Hybrid Optic gives the M27 access to an interchangeable Reflex Sight and ACOG Scope into one sight picture. This attachment works best for a user that wants an optical attachment but can't decide between a standalone Reflex Sight or ACOG Scope.

The Millimeter Scanner gives an ultra low zoom optical attachment that will scan through walls at close distances, and reveal stationary opponents. The scanning through walls typically doesn't tend to reveal much of anything, as the scan is very limited, but the very low zoom level the attachment provides enables users to see more of their surroundings while aiming down the sight.

The M27 is overall an assault rifle that fares best at medium range combat and beyond. In closer ranged engagements, the M27's lacking damage output and damage per bullet leave the user constantly outmatched in CQC by faster killing weaponry. At medium ranges, the M27's power becomes less of an issue and its superior accuracy gives it an advantage. At long range, although the M27 will need five shots to kill, the fact that the M27 can fire fully automatically out to such a long range helps offset its damage deficiency to a degree, as almost all opposing fully automatic or even some semi-automatic weapons will need their fire rate paced by their users to stay on target.

As of the January 26's patch, all assault rifles have reduced idle sway. The four-hit-kill range has been extended from 37.5 meters to 40 meters. The headshot multiplier has also been increased, allowing fewer shots to kill at longer ranges.

The M27 is only available in Nuketown Zombies and can be acquired from the Mystery Box for 950 points. It is a decent gun even without being Pack-a-Punched, as it has adequate reserve ammo and low recoil, although it has lower damage compared to other assault rifles. Because of this, it would benefit the player to obtain Double Tap Root Beer, as this increases damage and affects accuracy very little. The M27 can be proven quite useful and lasts up to later rounds as long as players can conserve ammo and go for headshots.

In the game mode Turned, it's the third weapon to be obtained if the player is a human.

Render of the M27's model

The M27 was cut from Call of Duty: Black Ops III, with evidence of its existence found in the game files.

The weapon model is seen in-game, however. During the campaign mission Lotus Towers, a crate of M27s can be seen, but the player is unable to use them. The M27 can also be seen on the left screen of the Data Vault, alongside the VMP and Sheiva. Additionally, it can be seen in the armory section of the multiplayer map Rift.

In Der Eisendrache and Zetsubou No Shima, it is possible to obtain the M27 using console commands on PC, reusing the same stats as it did in Black Ops II. The Mystifier is also available through console commands, again reusing its Black Ops II stats.

First person view of the M27 obtained via console commands 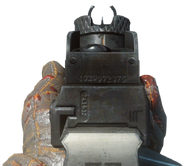 A crate filled with unusable M27s in "Lotus Towers"

The M27 in the Armory found on Rift.