Call of Duty Wiki
Register
Don't have an account?
Sign In
Advertisement
in: Call of Duty: Ghosts Light Machine Guns

The M27-IAR is a light machine gun that appears in Call of Duty: Ghosts.

The M27-IAR appears several times in the campaign, being used by Federation soldiers in "No Man's Land", "Struck Down", "Homecoming", "Clockwork", "Atlas Falls, "End of the Line" and "All or Nothing". The United States Army has also a stockpile during Homecoming.

The M27-IAR costs seven Squad Points to purchase, but it is unlocked by default for any soldier using the heavy weapons character preset, also earning the VMR Sight for free.

The M27-IAR is a long range, moderate damage weapon. At any range short of 24 meters, the M27-IAR will deal 48 damage, taking three hits to kill, or two with headshots. Damage linearly decreases until 41 meters, where the M27-IAR will deal 32 damage, taking four hits to kill. The M27-IAR's three hit kill range to the body is 39 meters long. The M27-IAR will always be a one shot kill in hardcore game types, one of the few fully automatic weapons capable of doing so, and headshots will reduce the shots to kill by one when dealing either the maximum or minimum damage. the M27-IAR has high penetration power, allowing it to shoot through obstacles with ease. The M27-IAR has one of the longest three hit kill ranges in the game for a fully automatic weapon, only being bested by the Remington R5 in this regard.

The M27-IAR has a moderate fire rate of 705 RPM. This is the second worst in the LMG category, but provides a comfortable balance between ammo conservation and lethality.

The M27-IAR's accuracy is marvellous. The iron sights, while appearing unusual, are very clear, and the recoil per shot is low with a self-centring recoil profile, drifting slightly upwards. The M27-IAR can be fired fully automatically with a great deal of precision, bursting or tap firing will only be needed at the longest of ranges, where Marksman Rifles and Sniper Rifles will have the edge.

The M27-IAR's handling characteristics are slightly above average for an LMG, but bad overall. The hip-fire spread is large, the aim down sight time is a slow 350 milliseconds, users will only move at 80% of the base speed and 32% of the base speed while aiming, and reloads are fastest in-class by a wide margin, taking 4.76 seconds to partially reload, 5.6 seconds to perform an empty reload, and a 3.5 second Reload Cancel speed. These speeds are unparalleled in the LMG category; nothing comes close to the reload speed of the M27-IAR. TO give reference, the Ameli is the next fastest reloading LMG, taking 4.9 seconds to perform a reload cancel.

The M27-IAR has an excellent one hundred round drum capacity, allowing the user to rarely have to reload. The user will spawn in with two hundred rounds total, split between two drum magazines.

The M27-IAR has the usual assortment of attachments on offer. The optical attachments are all available for the weapon. The Red Dot Sight provides a low zoom alternative to the iron sights, while the Holographic Sight provides a bulkier frame and a range reference bar. The ACOG Scope will provide a high zoom magnification for longer ranges, while the VMR Sight will provide a short and long range sight into one option. One of the most notorious attachment selections for the M27-IAR is the Thermal Hybrid, providing the M27-IAR a long range, thermal sight picture with an alternative close range sight. The thermal hybrid will also halve the idle sway speed of the weapon, making idle sway a non-factor considering how the LMGs have reduced idle sway compared to other weapon classes in Ghosts. The Tracker Sight will provide a similar effect to the Thermal Hybrid, but instead will have a thin sight that highlights enemies orange akin to the tracking effects from a Motion Sensor or Oracle, while the alternative sight is a low zoom set of iron sights. It should be noted that all optical attachments bar the Tracker Sight will increase the aim down sight time to 380 milliseconds.

The Flash Suppressor will reduce muzzle flash to a minimum while firing. The minimal benefit this attachment brings makes the attachment an unattractive option. The Silencer is an extremely popular attachment on the M27-IAR, reducing the range by 25% in return for not allowing the M27-IAR to reveal the user on enemy radar while it is being fired. Pairing this with Off the Grid will completely eliminate the user from radar. The Muzzle Brake will extend the M27-IAR's lengthy range values by 25%, allowing for more three hit kills and two headshot kills. However, the attachment's effect is almost useless in Hardcore, where it only serves to extend the range that users can get one shot kills through cover.

The Foregrip will reduce viewkick values by ten percent, making the M27-IAR easier to control. It's not a good attachment choice on the M27-IAR as its recoil values are already low, making the Foregrip's benefit also low. The Grenade Launcher will use the lethal slot of the user's class to have two grenades on tap. This explosive ordnance can be quite lethal. The Shotgun will also use the lethal slot to provide a weak but occasionally useful buckshot attack that can save the user's life in close quarters. It is very quick to switch to these two underbarrel weapons.

The M27-IAR is found in Extinction mode, in Point of Contact. It can be found after the first barrier hive near the entrance of the city, on the wooden platform between the first two hives. It costs $3000 to purchase making it the costliest weapon in the game alongside the Chain SAW. Compared to the other Light Machine Gun in the map, the Chain SAW, the M27 is a much more reliable LMG due to the faster reload time, higher damage per bullet, and the ability to ADS, as well with a major range boost. However, the Chain SAW is a much better weapon for closer engagements. The M27 is best used like its Multiplayer counterpart: holding off important positions and using it over longer ranges. Due to the extremely long range and good damage per bullet, it is arguably the best weapon to tackle on the Scorpions.

The M27-IAR appears in Safeguard, and is obtained from Support Drops. It comes with a VMR Sight and a Flash Suppressor.

It is extremely effective, especially in medium-long range, since it is a LMG. It has a high magazine capacity, the highest out of all the weapons in the game mode, of 100. Due to its low rate of fire and slow aim speed, however, it may not be effective in close-quarters. It is also not effective for run-and-gunning, due to its low mobility. It is good if camping in one area, however.

The M27-IAR in first-person view. 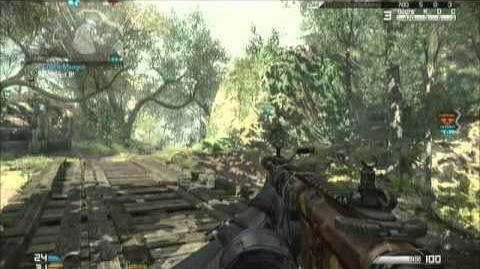