Call of Duty Wiki
Register
Don't have an account?
Sign In
Advertisement
in: Call of Duty: WWII Shotguns

The M30 Luftwaffe Drilling is a shotgun featured in Call of Duty: WWII.

It is widely used by Waffen-SS troops.

The M30 Luftewaffe Drilling, in comparison to the other shotguns, has a higher range and longer one shot kill potential, being the only shotgun that can kill in one shot throughout its entire range (though this would require it to hit all 8 pellets at its longest range). This is possible due to the M30's low spread, being the lowest of its class. Due to these traits, it is recommended that one aim down sight when using this weapon unless they be in a sufficiently close range where the M30 would be a three pellet kill. One should be wary of reloading, as it takes 3.5 to 4 seconds depending on whether it is being reloaded from halfway or empty. Because of this, running Hustle in conjunction with the M30 is recommended. Attachments that well suit the M30 include Quickdraw, Rapid Fire, Advanced Rifling, and the Rifle Bullet. The Reflex Sight may also be worth consideration due to the M30's reliance on accuracy.

The M30 is unique in that it has its own special attachment, the Rifle Bullet, which allows the player to load a traditional bullet into the weapon's third barrel. The Rifle Bullet essentially functions as a single-shot sniper rifle, and boasts similar damage to the Lee Enfield, netting one-shot-kills from the Upper Torso, Arms, and up at close to medium distances. At longer ranges however, it will lose the ability to kill in one shot to the lower arms. When toggled, the player flips up the weapon's long range sights. The Rifle Bullet cannot be used as reactively as one of the sniper rifles, due to the fact that it only chambers a single shot. If one misses a shot using the Rifle Bullet at close range, it would be better to simply switch back to the shotgun or to a secondary pistol. The Rifle Bullet allows a player using the M30 to more actively engage long distance targets, instead of having to run from cover to cover to cross open ground which the player may not be able to engage a more distant enemy. Also, as with the Incendiary Shells, the Rifle Bullet is useful to use as backup in case a player runs out of primary ammo for the M30.

The M30 can be obtained from one of the Weapon Lockers in the map The Final Reich for 500 Jolts. This is by far the most powerful shotgun, with the highest damage per shot , netting one shot kills to the body until the teen waves. With Kugelblitz , its damage increases even more , being able to kill with one shot until the early 20's. Although the M30 is a shotgun , with previous shotguns having low penetration , the M30 can cut down groups of zombies with ease in the early waves.

Inversely , the chamber size and reload time of the M30 both work against the player. Reload times are by far and large the M30's weakness , with Schnellblitz being a big help to cut down on the time spent reloading.

When upgraded via the Ubersprengen, it becomes the Tripps and has a 3 rounds instead of 2 , as well as increasing its damage. Although the Tripps has a small chamber size of 3 rounds , the 3 rounds do immense damage , being able to kill with one shot into the early 30's. Another testament to this fact is that the Tripps can kill a Wüstling with one shot to its back until the late 30's.

Inspecting a side of the M30 Luftwaffe Drilling. 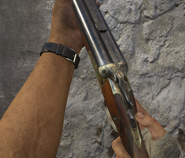 Inspecting another side of the M30 Luftwaffe Drilling.