The M40A3 is only available in the multiplayer game mode, and is the only sniper rifle in-game with this distinction. It is the first sniper rifle to be unlocked, and as with all sniper rifles it is best used at a long range. It is unlocked at rank 3, and is a favorite among experienced and inexperienced players alike.

The M40A3 has some favorable handling characteristics. It has the fastest raise/drop time among all sniper rifles, tied with the R700. This allows players to switch to/from the M40A3 more rapidly. It also has a faster fire rate than the S-Tac Aggressor. It reloads per individual bullet, making it slow to load when completely empty but easy to top off if only a shot or two has been expended. The M40A3 also has less recoil than the R700 or the S-Tac Aggressor, and has a quieter firing sound which may make detection by foes more difficult in Hardcore.

The M40A3 has an unusual feature shared only with the S-Tac Aggressor: when it is equipped with the ACOG Scope, its base damage is raised from 70 to 75. This means that, when combined with Stopping Power, it is a one-shot-kill anywhere on a non-Juggernaut. It also makes it easier to use the M40A3 at closer ranges and facilitates quick-scoping, due to the ACOG's reduced magnification and aiming time compared to the sniper scope; however, visual recoil is increased significantly, and the scope will block the target if the player happens to miss. Additionally, the M40A3 with ACOG and Stopping Power is still only a one-shot-kill on Juggernauts when to the head or neck. The weapon also becomes much less effective at long ranges due to the reduced zoom and inability to hold breath.

The M40A3 appears in Old School Mode with 5 rounds in the magazine and 15 rounds of reserve ammunition. 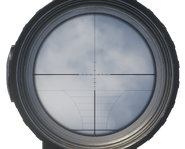 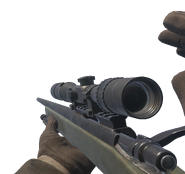 Medium, None when ADS

The M40A3 is available in the Nintendo DS version of Call of Duty 4 as one of the two sniper rifles in game. The M40A3 vaguely resembles the one on the consoles, albeit with a few differences. The first most noticeable difference is the black color scheme. The other differences are the lowered rate of fire, virtually non-existent recoil, higher magazine capacity, and the higher damage.

In campaign, the M40A3 is one of the most powerful weapons the player can acquire. Doing 100 damage, the M40A3 is a one-shot kill to any part of the body at any range. It also has decent hip-fire accuracy, perfect when crouched; this is something one wouldn't expect from a sniper rifle, due to them having a reputation for terrible hip-fire accuracy. The M40A3 is only found in the levels "Hard Impact" and "The Russian", limiting its use.

In multiplayer, the M40A3 is the only sniper rifle available to the Marines and SAS. Due to being overpowered in single player, the M40A3 had its magazine capacity reduced to one round, essentially making it a single shot weapon. The M40A3 is effective at all ranges, due to the perfect hip-fire accuracy when crouched, and its one-shot kill properties, allowing it to compete with shotguns at close range.

The M40A3 returns in Call of Duty: Modern Warfare: Mobilized, as the only sniper rifle in game. Its 3-D model has been redesigned to resemble the M40A3 from Call of Duty 4: Modern Warfare. Just like the other weapons featured in Call of Duty: Modern Warfare: Mobilized, the M40A3 is more powerful than the console versions, being able to perform a one-shot kill to any part of the body (two when playing Hardened, making it a much less desirable weapon). When crouching, it also has near perfect hip fire accuracy, making this sniper rifle even more effective at no scoping. The only disadvantages are the fact that it can only carry up to 20 rounds of reserve ammunition and there are no hip fire cross-hairs when the player isn't aiming down the scope.

M40A3 can be acquired in several missions such as "The Only Easy Day... Was Yesterday" and "Of Their Own Accord", via code "give m40a3". They are also obtainable in Special Ops missions "Wetwork" and "Armor Piercing". It retains its model, pickup icon and stats from Call of Duty 4: Modern Warfare.

First-person perspective of the M40A3 in Modern Warfare 2.

The M40A3 returns in Call of Duty: Modern Warfare 3: Defiance and retains its model in the previous game but given a new HUD. The M40A3 is a powerful and accurate bolt-action rifle in game.

The M40A3 appears in the campaign missions. The rifles damage does not drop on any range meaning, the M40A3 is always a one-hit-kill weapon. The M40A3 is also given a shorter amount of time to zoom unlike the sniper rifles in Black ops DS. However, to balance this off, the rifle is given a slow rate of fire due to the bolt cycling. The M40A3 is effective at Recruit and Regular difficulty. However, at Hardened difficulty, the rifle gained a disadvantage because of the damage drop making it a two-shot-kill weapon. The M40A3 is always used in long range engagements to eliminate enemies in the missions Overwatch, Oil, Fire and Ice and Dangerous Cargo

The M40A3 is unlocked by acquiring 1000 kills with any rifle in game. The M40A3 is capable of killing players with one shot and two shots if they are equipped with the Body Armor Perk. However this can be countered by the Stopping Power Perk although it may not be necessary if all enemies have no Body Armor Perk. The M40A3 is widely used by snipers in multiplayer. The rifle performs excellently in defending objectives and escorting players especially in the gamemode Sabotage and the sniper has greater advantage when it comes to long range combats. However, the M40A3 can be overwhelmed by enemies in short range combat if the player has no experience with quickscoping. The M40A3 also can be a stealthy weapon when the player is equipped with Camouflage or Stealth Perk. Overall, the M40A3 is a decent sniper rifle when it comes to power and accuracy.