The M4 Sherman was a medium tank used by Allied forces during World War II.

The Sherman tank is seen throughout every Call of Duty game set during World War II (except the original Call of Duty). The tank is frequently seen providing support for the character by Allied forces. The M4 Sherman is considered the quintessential Allied tank of World War II.

A Sherman Firefly tank can be used in Call of Duty 3 by playing the Polish missions.

The M4 Sherman is also featured as a usable vehicle in United Offensive's multiplayer, with its rough equal the Panzer IV. The same configuration was also intended for Call of Duty: World at War's multiplayer, however the M4 Sherman and the associated maps were scrapped.

In Call of Duty: United Offensive, the Sherman is the Americans' main tank and appears in all four American campaign levels. Like the Panzer and T-34,in Multiplayer, the Sherman can be used by two players and a machine gun mounted on its top, this one being a M2 .50 along with a .30 cal machine gun poking out from the front of the tank. The Sherman can withstand 4 shots (from another tank). Since the Elefant is unavailable to the Germans in levels that have the American team, the player doesn't have to worry about seeing one pop up without warning. Just make sure to keep on eye out for anti-tank weapon-equipped enemies, and the player should be fine.

The first time they are shown is during the campaign in Aachen while playing Chuck Walker. While playing as Sam Rivers it is possible to get to control a Sherman for most of the level (the other times being outside clearing out buildings). The tanks then are seen one last time during the last 3 missions of the game in Remagen.

Two M4 Shermans are also seen in the idle menu movie, where they destroy two Panzer IV's and several German infantrymen using them as cover.

M4 Shermans are chronologically first seen in Operation Supercharge. Three of them can be seen and one of them is destroyed by Flak 88 guns. British Shermans in North Africa are painted light tan and can be mistaken to be white. Shermans in Europe are seen clad in olive drab and have the "Rhino" cutters on the lower transmission cover to aid them in plowing through hedgerows. The tanks do not have top-mounted MGs on them.

A Sherman in desert camouflage Call of Duty 2.

A destroyed M4 Sherman in Call of Duty 2.

"The main tank produced by the U.S. in WWII. While underpowered compared to Panzers, their greater numbers were able to overwhelm the Germans."
— Call of Duty 2 Big Red One bonus material section

The M4 Sherman appears in almost every mission of the campaign, first seen in We've been Through Worse, a variant, known as a Sherman Dozer, carries off the road a destroyed M4 Sherman, with more of them appearing during the mission, mostly being destroyed by Dive Bombers, and by a Tiger I. They do not appear in North Africa, being replaced by the M3 Stuart Light Tank.

Chronologically the M4 Shermans are first seen in Farewell to Friends, making appearances in almost every mission up to the end, with their only variation, the Dozer, appearing in major events such as The Great Crusade

A Sherman Dozer in the mission "We've Been Through Worse" 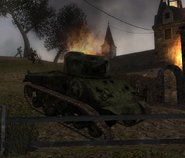 "The M4 was the standard U.S. medium medium tank. Although inferior in armament and armour to German medium and heavy tanks of the day, it was reliable and easy to manufacture"
— Call of Duty 3 bonus materials section.

The Sherman makes many appearances throughout the campaign, being used by the Americans, Canadians, and the Firefly by the Polish. This game clearly shows the vulnerability of the Sherman to Tigers. It is available in the multiplayer maps Poisson and Merville. The driving controls differ from that of the campaign, although the multiplayer controls are a bit easier. Its hostile counterpart is the Panzer IV. The Panzer only has one advantage over the Sherman and that is its a bit lower to the ground and thus slightly harder to hit.

The Sherman's frontal armor can take three hits from a Panzer while the sides can take two. Shermans and Panzers can be taken out by two Bazooka or Panzerschreck rounds, or if closer one sticky grenade and one rocket launcher round.

A Sherman tank as it appears in Call of Duty 3 for the Americans (Polish and Canadians use the Firefly).

Another Sherman tank in Call of Duty 3.

Sherman M4A3 in the bonus materials.

A Sherman tank in Mutiplayer.

The Sherman only appears as an AI in solo/co-op, and is not featured in any map in multiplayer. It was, however, intended to be featured in several maps, including the cancelled map Beachhead. The multiplayer variant was identical to the standard Pacific camouflaged Sherman, only with an added usable M2 Browning for the second player.

The Sherman makes its first appearance in the American campaign level Hard Landing during the attack of the Japanese airfield on Peleliu Island.

A winterized Sherman is also found in the game files; presumably there was originally going to be an additional campaign set in the European Theater of Operations in winter time.

A Sherman on Peleliu.

A Sherman on Peleliu.

A Sherman "Crocodile" on Peleliu.

A Sherman firing its Flamethrower in World at War.

Cut multiplayer variant with a Browning M1919 for the second player.

Cut winterized variant, possibly intended for use in the cancelled Holland campaign.

The M4 Sherman tank appears multiple times in both the Pacific and European campaings during the game. In the mission "The Race to Bastogne", the player takes control of GySgt. Alex McCall, the operator of the a Sherman tank.

Sherman using its Flamethrower in the mission "Basic Training" 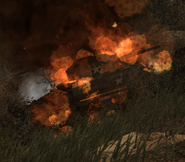 A Sherman in the mission "Ettelbruck"

The same Sherman firing at a building.

The M4/A1 Sherman appears throughout the campaign of the game. The tank is used by Armored battalions and divisions of the United States Army. They first appear in "D-Day" as covers for the player's advance but soon were all destroyed. In the level "Collateral Damage", the player assumes control as SSG. Augustine Perez of the 745th Tank Battalion and command the crew of his M4 Sherman.

The tank is featured aesthetics in several multiplayer maps. In the War Mode mission "Operation Breakout", the tank appear after the Allied Powers completed the second objective. The player can get on top and use the mounted machine gun. The tank is also the final objective of the mission as the Allies have to escort it to destroy the German 88s. A few staionary M4 Sherman tanks appear on the multiplayer map Shipment 1944, where they appear right outside the maps boundaries

View inside the tank. 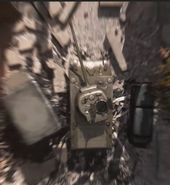 The M4 once more reappears in Call of Duty Mobile in re-creation of the Call of Duty: WWII map Shipment 1944. It appears as a prop for the map and as such, is unusable.