For the modern variant, see M60E4.

The portable M60 is only available in "S.O.G."; it is one of the starting weapons in the level, and a version with Extended Mag ("Big Ammo") can also be picked up. However, the mounted M60 appears frequently throughout the campaign. It is used to defend the C-130 in "Operation 40" as it is taxiing down a runway under heavy enemy fire. Several mounted M60s also can be used in "S.O.G.". In "The Defector", a mounted M60 can be found at the end of the mission. It is extremely accurate and powerful enough to gib enemies. It is last seen in "Rebirth," being used on Mi-8 helicopters against the advancing CIA soldiers.

The M60 is unlocked at level 21 in multiplayer.

The M60 has the highest per shot damage of any fully automatic weapon. At any range short of 25 meters, the M60 will deal fifty damage, taking two shots to kill. At any range beyond that, the M60 will need three shots to kill, or two shots if both are headshots. In Hardcore game types, the M60 is a one shot kill at any range. Only the Skorpion can boast a two shot kill while firing fully automatic, but its range is pitiful, whereas the M60's two shot kill range is very respectable. The M60 also has high penetration power, allowing users to shoot liberally at enemies behind cover.

The M60's fire rate is abysmal. It is the worst rate of fire of any fully automatic weapon in the game, at 535 RPM, the same speed as the CZ-75 with the Full-Auto Upgrade. The rate of fire holds the M60 back considerably, as the M60's time to kill increases more severely the more shots the player misses.

The M60's accuracy is a mixed bag. The M60's iron sights are very clean, but the recoil is very unusual. The M60 has extremely heavy horizontal recoil, and it has no downwards recoil value, meaning the M60's vertical kick is always upwards. Usually that means that a weapon will have a lot of vertical recoil, but the recoil values going upwards aren't that high, and the rate of fire is so low that it allows the M60 to naturally counteract the vertical recoil between shots. The M60's centerspeed is 1500, an average value.

The M60's handling characteristics are abysmal, even for LMG standards. The user can only move at 87.5% of the movement speed with the M60 in use, strafes at 40% of the base speed, takes 350 millseconds to aim down the sight, and has a very large hip-fire spread. The M60's switch speeds are slow, and the reload is the longest reload in the game. Whether or not the M60 is performing a tactical or dry reload doesn't matter; either way, the M60 takes 9.7 seconds to reload the belt of ammo, or 7.5 seconds if a Reload Cancel is performed. The M60 has abysmal handling all-around.

The M60's big strength is in its capacity. As a belt fed weapon, the M60 boasts a huge 100 round belt capacity, by far the largest in the game, with nothing coming close to the M60's magazine capacity. The RPK with Extended Mags is the next closest, with eighty round magazines. The big belt also means that the user spawns in with a lot of ammo. Two belts on spawn means 200 rounds of ammunition to work with, which is plenty.

The M60 has a slgihtly larger attachment selection than usual, as the Grip is available.

Extended Mags is referred to in-game as Big Ammo. When Extended Mags is equipped, all 200 rounds the M60 has is put into one belt, meaning reloads are not necessary in the vast majority of cases. Not having to reload is a pretty nice benefit.

The ACOG Scope lowers the M60's centerspeed to 1100 and increases the aim down sight time to 400 milliseconds. It's overall a terrible attachment.

The Infrared Scope lowers the M60's centerspeed to 1300, also slowns down aiming to 400 milliseconds, and adds a ton of idle sway to the M60. Avoid it.

The Red Dot Sight and Reflex Sight are both available to the M60, although they are usually ignored. The M60's iron sights are excellent, and there are strictly better attachments to choose from.

The M60 makes a very brief appearance in Zombies. It is the primary weapon in Dead Ops Arcade for all characters, and can only be replaced by power-ups or if the player receives the Fate of Firepower, upgrading the M60 to a Death Machine permanently. It never needs to reload and never runs out of ammo. It has a different firing sound in Dead Ops Arcade.

Gold Camouflage on the M60.

Diving with the M60.

Render of the M60 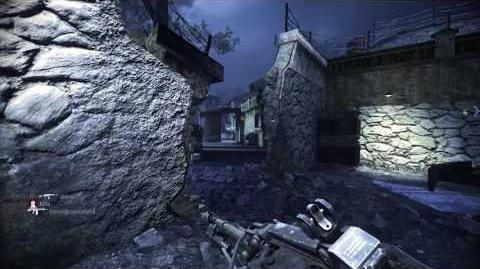 Automatic
The M60 appears in Call of Duty: Black Ops (DS) with its original iron sights, unlike the console/PC versions. It has a low fire rate and very high recoil, though not as much as the XM22. In multiplayer, through the use of the perk Nerves of Steel, the recoil can be reduced. It has a 100 round box magazine with 200 reserve ammo and a slow reload. In multiplayer, it is unlocked for the allied faction after 150 kills with the XM22, and in Zombies, the M60 can be found in the Mystery Box. It looks very similar to the MG4 despite the ammo being placed below the gun. It is found only twice in the campaign, and it is always more or less hidden.

Inventory icon of the M60.

The M60 in first person

Bell uses the M60 when fighting the Viet Cong at the end of "Fracture Jaw", and it's the primary weapon for Alex Mason in the side mission "Operation Chaos", and can also be picked up from Aldrich's men.

As with all weaponry in Call of Duty: Black Ops Cold War, the M60 can be set as the starting weapon for a Loadout to enter a map with alongside being available from the Mystery Box for 950 Essence. When upgraded by the Pack-a-Punch Machine, it becomes the Slow Burn.