The M60A4 appears in Black Ops as a mount weapon in the boat from the mission "Crash Site". It used the same model as the Call of Duty 4: Modern Warfare model. 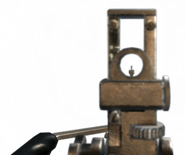 Retrieved from "https://callofduty.fandom.com/wiki/M60E4?oldid=2474537"
Community content is available under CC-BY-SA unless otherwise noted.