The fragmentation grenade can be used in several situations; learning how to effectively arc, bounce, and/or cook a grenade can make a player highly lethal (especially with the Frag x3 perk). In the game, the grenade functions like a concussion grenade (It emits no fragments, it only relies on explosive power). This has been done to balance the grenades. The fragmentation grenade will usually kill the player if they see the Grenade indicator. If the player cooks the grenade long enough it will explode in the air when thrown; this can catch targets off-guard and gives them no time to react before the grenade detonates.

Experienced players know the "hotspots" (where players are most likely to frequent) of each map and will utilize this knowledge accordingly. If aimed properly, throwing the grenade up in the air will cause it to land on the path where enemies are still sprinting to gain a field advantage. This tactic could possibly end up in multiple kills, sometimes killing two or even three opponents, giving the player's team an early UAV. It usually pays off not to be the person in front running for front lines. This tactic can be used in conjunction with the perks Frag x3 and Sonic Boom and is known as grenade mortaring. This tactic could also be used to lob fragmentation grenades toward a defended objective or a group of red dots, although experienced players will usually refrain from this tactic and use their fragmentation grenades more efficiently.

In the campaign, the player spawns with four grenades and can find frags in grenade bags dropped by some enemies.

The Frag Grenade appears in Old School Mode. Every player spawns with one grenade. Each sprite gives one grenade. It is possible for a player to own 4 grenades in this mode.

Default for all factions

The DS variant is very similar to the console version. It can be cooked by holding the button down, but only for four seconds.

The Grenade in Call of Duty 4: Modern Warfare (Mobile)appears in the levels "Roadway," "Ultranationalist Town," and "Hostile Town." Instead of having a fuse, it explodes on impact with the ground.

"Note that frags tend to roll on sloped surfaces. So think twice before throwing one up hill."
— Sgt. Foley

Due to its smaller range and somewhat "nerfed" damage, it is recommended the player throws as far as he can and let it roll to its target.

The M67 grenade is the main grenade used by both the player and the enemy.

The M67 Fragmentation Grenade returns in the game Call of Duty: Black Ops with an updated kill icon in the bottom left corner.

When a grenade is thrown back, and as soon as it is released by the player it becomes his own, therefore even if the grenade is within lethal range when it detonates, it will be counted as a suicide. This is useful when around multiple team-mates, denying the enemy team kills, which is especially useful in games like TDM.

Render of the M67 Grenade.

The M67 also appears in Zombies, being the standard grenade for all players in Black Ops, replacing the Stielhandgranate from Call of Duty: World at War, except for the remastered World at War maps which retain the Stielhandgranate. Each player starts the game with two grenades and receives an additional two grenades every subsequent round. However, the player cannot carry more than four M67s at a time. On Kino der Toten, "Five", and Ascension, Frags can be bought off the wall for 250 points. Buying them resupplies the players stock to the maximum of four grenades. An interesting fact is that damage will increase with every round.

250 (off the wall in Kino and Ascension)

An M67 Grenade is used by John Price inside the house.

The M67 Grenade is seen again in Call of Duty: Modern Warfare 3, as the standard-issued grenade.

The M67 returns as a cookable Frag Grenade in Modern Warfare 3. Its damage, throwing range, and blast radius are somewhat less than the Modern Warfare 2 version, and grenades cannot be resupplied by Scavenger.

Compared to the Semtex, the other lethal grenade, they have exactly the same damage and blast radius, and only their fuse times and properties are different. Frags can be thrown farther due to its longer fuse (both grenades follow the same path when in the air) and can bounce, while Semtex has a shorter fuse and sticks to surfaces and players. Semtex also cannot be thrown back and has a distinctive beeping sound and red light when active, which often alarms nearby players.

A M67 Grenade on the ground.

The M67 appears as the starting grenade in the Survival Mode for Modern Warfare 3. It can be refilled for $750. The player starts with two M67 grenades on Easy and Regular maps (Tier 1 and 2), but none on Hard and Insane maps (Tier 3 and 4).

The M67 Grenade returns in Call of Duty: Black Ops II. It is only available in the 1980's section of the campaign, while in the 2025 section, as well as in multiplayer and Zombies, it is replaced by the Frag Grenade.

The M67 Grenade returns in Call of Duty Online.

The M67 Grenade returns in Call of Duty: Ghosts.

The M67 Grenade is part of the starting loadout in for most campaign missions, except "The Ghost Killer", where the Semtex is used instead.

The M67 Grenade appears in multiplayer. It plays the same role as previous versions of it, being an all-rounded grenade that's good for clearing rooms of enemies and taking out enemies that are out of view. Versus the Semtex, it has a longer fuse time, but cannot stick to surfaces like the Semtex can. If you have Thermobaric Grenades and Extra Tactical equipped, you may not need the M67 Grenade, as the Thermobaric Grenade can be used in a similar role of clearing rooms or killing enemies that are out of sight as long as you throw both of the Thermobaric Grenades at the same target. 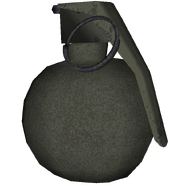 Model of the M67 Grenade.

The Frag Grenade returns in Call of Duty: Modern Warfare.

Unlocked with Create A Class at Lv. 4 (Lance Corporal)

"Explodes after a short fuse. Can be cooked by holding <key>."
— In-game description. 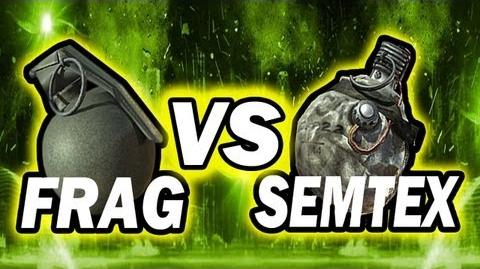 MW3 Tips and Tricks - Frag vs. Semtex Grenade (Modern Warfare 3 Grenades)
Comparison of the M67 and the Semtex
Community content is available under CC-BY-SA unless otherwise noted.
Advertisement