The M68 is an optical attachment that appears in Find Makarov: Operation Kingfish and Call of Duty: Modern Warfare 3. It was cut from most gameplay in Modern Warfare 3, and was most likely replaced with the ACOG Scope, but nevertheless makes a brief appearance in the game, as well as making another brief one in Call of Duty: Ghosts.

The M68 is attached to Gary "Roach" Sanderson's G36C and Simon "Ghost" Riley's SCAR-L, as well as the M4A1s used by Sandman and Derek "Frost" Westbrook.

Roach holding his G36C fitted with an M68.

The MK14 was seen using an M68 in an ELITE trailer.

The M68 was seen in the gameplay trailers for Survival Mode. It was eventually cut from actual gameplay. In game files, it is possible to find cut texture and reticle. 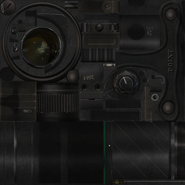 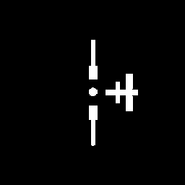 The M68 in-game, seen briefly in the Survival Mode trailer. 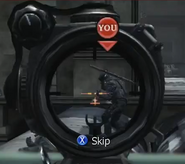 Aiming down the M68.

After collecting the Rorke file in "The Ghost Killer", there is an image that shows Rorke training with an M4A1 equipped with an M68.

Rorke aiming an M4A1 with an M68 in a Rorke file image.