Unlike its multiplayer and zombies counterpart, the M8A1 is fully-automatic by default in the campaign, though the Select Fire attachment makes it 4-round burst. It is part of the recommended loadout for "Odysseus", where it is equipped with a hybrid optic. It is also commonly used by friendly factions and by the Mercs in this mission.

"4 round burst assault rifle. Bursts can be fired in quick succession."
— Description

The M8A1 is a moderate damage per bullet assault rifle. At any range short of 1.3 meters (essentially knifing distance), the M8A1 will deal 35 damage per pellet, scoring a three hit kill. At any range between 1.3 meters and 31 meters, the M8A1 will deal 33 damage, taking four shots to kill. The M8A1 deals 24 damage at any range beyond 31 meters, necessitating five hits to kill, or two shots to kill in Hardcore. There is no increased headshot multiplier to the head, meaning the shots to kill cannot be reduced with a headshot. The user should almost never expect to get a three hit kill, but for the most part, four shot kills are common. The M8A1 has medium penetration power, allowing it to punch through light cover with acceptable performance.

The M8A1 is a burst fire weapon, but a very fast firing one at that. The M8A1 has a four round burst with small burst delay. The M8A1 fires at a lightning quick 1250 RPM within the burst. When accounting for burst delay, the M8A1 actually has an above average overall fire rate at 789 RPM overall, one of the better rates of fire in the assault rifle tier.

The M8A1's accuracy is superb, arguably the best in the game. The iron sights are okay, but the recoil profile is exceptionally small. The M8A1 has minimal kick to the sides and only slight upwards kick. Even better is that the M8A1 has a monstrous centerspeed value of 2500, easily the highest centerspeed value in its class. Recoil is almost nonexistent on the M8A1 thanks to the combination of acceptable recoil values and the gargantuan centerspeed. Even at long ranges, the M8A1 can be comfortably fired as fast as possible, with no need to wait for the recoil to settle between bursts. However, the M8A1's accuracy heavily degrades with the Select Fire attachment in the fully automatic mode. The M8A1 fires at a constant 937 RPM in full-auto, and in the full-auto mode, the horizontal recoil is increased and the centerspeed is decreased severely to 1600. Even with these changes significantly reducing accuracy overall, the M8A1 in the full-auto mode is still somewhat controllable at medium ranges, with the option to switch back to Burst Fire always available should one need the increased accuracy for long range. 1600 is still above average for centerspeed as far as assault rifles are concerned, and the horizontal recoil values, while increased in size, still aren't obnoxiously large. The crux of the recoil increase with the M8A1 in full auto lies between the centerspeed reduction and rate of fire increase.

The handling characteristics are average for the M8A1. The M8A1 allows users to move at 95% of the base speed, strafe at a sluggish 40% of the base speed, aim down the sight in 250 milliseconds, and the M8A1 has an average sized hip-fire spread. The M8A1's reloads are a bit on the slow end for an assault rifle, but not terribly slow. The M8A1's partial reload animation takes 2.3 seconds, and the empty reload takes 2.9 seconds to perform. A Reload Cancel can be done at 1.65 seconds. This is one of the slower reloads in the assault rifle class, but it's not slow overall.

The M8A1 has an above average magazine capacity of 32 rounds per magazine. This equates to only eight bursts per magazine. The M8A1 comes with an enhanced starting ammo loadout as a result, with 128 rounds when spawning in.

The M8A1 has the standard assortment of attachments on offer.

The Reflex Sight and EOTech Sight both offer replacements to the iron sights for the M8A1. The M8A1's biggest strength is easily its accuracy. While the iron sights aren't horrible, it's not a bad choice to use one of these sights, especially if the user finds improved performance with them. Just bear in mind that an EMP will wipe the reticle off of the electronic sights until the EMP effect wears off.

Fast Mag increases the M8A1's reload speed. The M8A1 isn't terribly inefficient with ammo, and while the M8A1 has one of the slower reloads in its class, the reloads aren't obnoxiously long. Fast Mag is a luxury attachment that seldom few players will find to be mandatory.

The Laser Sight tightens up the M8A1's hip-fire spread by 37.5%. This makes hip-fire much more precise and predictable. The M8A1 is competent in close-quarters combat, and the Laser Sight only improves it. Still, one must the worth of putting a close range attachment on a weapon that excels at medium to long range combat.

The Quickdraw Handle and Adjustable Stock are great attachment options for more aggressive players. The Quickdraw Handle makes the M8A1 aim in a swift 125 milliseconds, and the Adjustable Stock increases the strafe speed from a paltry 40% to a much more acceptable 80%. The value of these attachments is greatly dependent on how offensive or defensively a user plays with the M8A1, as more defensive builds will find less need for the mobility and reactivity these two attachments provide.

The ACOG Scope and Target Finder provide longer-ranged optical attachments for the M8A1. Given how the M8A1 excels at mid to long range combat, these sights are a natural fit. The ACOG Scope retains mor peripheral vision when aiming and a higher zoom level, while the Target Finder doesn't zoom in as far and obscures more of the peripheral vision, but highlights enemies without Cold Blooded with a red diamond to facilitate target acquisition.

FMJ is an excellent attachment choice on the M8A1, improving the M8A1's penetration power, and the damage the M8A1 can do to aerial scorestreaks. The increased penetration power can be put to great use by the M8A1 thanks to its ability to get one burst kills and the extreme rate of fire in the burst creating for tons of flinch. The M8A1 can slice through many surfaces like they weren't even impeding the bullets with this attachment. That being said, this attachment is also dependent on playstyle, as those who don't like to shoot through walls and the like will find little use for this attachment.

Select Fire, as mentioned earlier, gives the M8A1 a fully automatic method of fire, but comes at the cost of reduced accuracy. The M8A1 in full auto mode will fire at a constant 937 RPM, and in doing so, behaves similarly to the Type 25, but with a bit less accuracy. Select Fire will heavily improve the M8A1's close quarters capability with fully automatic fire, and unlike other weapons in full auto with Select Fire, remains controllable enough at medium ranges. Select Fire allows the M8A1 to be more competitive in close quarters, and as such, is an attachment one should always consider on the M8A1.

The Hybrid Optic is a nice attachment option on the M8A1, giving a low zoom and high zoom sight that one can choose between rapidly. If one struggles to decide between a Reflex Sight and the ACOG Scope, try this sight out.

Extended Clip increases the M8A1's magazine capacity to 42 rounds, and grants an additional forty rounds to the M8A1's starting ammo loadout. The M8A1 gets reduced benefit from Extended Clip compared to other weapons. This attachment will also slow down the reload speed by ten percent. This attachment can provide the user an alternative to using Scavenger. 42 rounds per magazine is not completely divisible by the four round burst the M8A1 fires, and as such, after ten bursts with the same magazine, the eleventh pull of the trigger will only shoot two bullets instead of four.

The MMS gives an ultra-low zoom level, x-ray sight. The x-ray effect itself is quite limited in utility. Cold Blooded users do not show up at all, enemies that are using don't show up unless they stop moving, and the x-ray effect is limited in range, unable to detect still enemies at long ranges. The MMS gives the user the ability to see and pick off opponents sitting still behind lighter cover.

Overall, the M8A1's strengths make it an extremely popular weapon in Multiplayer. The combination of a respectable damage output and the ridiculous accuracy makes the M8A1 dominate at medium range combat.

The M8A1 is available in Green Run, Nuketown Zombies, and Die Rise for 950 points from the Mystery Box. It retains its four-round burst fire mode from multiplayer. Double Tap Root Beer can be very useful with this gun, as its four-round bursts start off somewhat weak, making it difficult to kill zombies quickly. It can be very good for accumulating points in the right hands, and is suitable for shooting zombie hordes. Although the recoil is moderate, the recoil can actually be used to the players' advantage, as if the player aims at the chest, the final 2 bullets will usually hit the head, scoring headshot points, if not a headshot.

When Pack-a-Punched via the Pack-a-Punch Machine, it becomes the Micro Aerator. The Micro Aerator can perform exceptional headshot damage, as its four-round bursts can eliminate zombies with ease until as late as round 24, with Double Tap Root Beer. It also holds a large ammo capacity, making it one of the more worthwhile weapons to Pack-a-Punch. Also of note, its hip fire accuracy is increased dramatically, increasing its close quarters effectiveness. It is one of the weapons that is able to be Pack-a-Punched multiple times to cycle through attachments for 2000 points. Attachments include the Reflex Sight, EOTech sight, Target Finder, Millimeter Scanner and the Grenade Launcher.

The M8A1 in first-person. 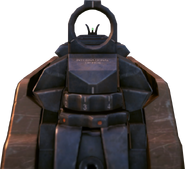 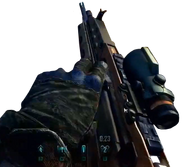 Cocking the M8A1 with an ACOG Scope attached.

A soldier holding the M8A1.

The M8A1 in Zombies mode.

Third person view of the M8A1 that is equipped with ACOG Scope.

The Micro Aerator in first person.

The M8A1 is seen being held by Mike Harper in the loading screen.