For the predecessor of this rifle, see M8A1.

The M8A7 can be unlocked at level 55, costing one unlock token. It is the final assault rifle as well as the final weapon unlocked overall.

It is a four round burst assault rifle with a high fire rate. It is a four shot kill out to 37.5 meters, after which it will decrease to five, meaning two bursts will be required to kill at long ranges. It has a headshot damage multiplier of 1.1x, which will not decrease shots to kill against a non-damaged enemy at any range.

The M8A7 has one of the faster times to kill in the game due to its very high fire rate, sporting a burst RPM of 1000 which can be increased to 1111 RPM with the Rapid Fire attachment. It has a burst delay of 166ms, allowing for quick follow-up bursts. Unlike the XR-2, Pharo, and 48 Dredge, however, the M8A7 will not automatically cycle bursts if the player holds down the trigger.

The weapon's recoil is almost entirely vertical, meaning that the High Caliber attachment can be very useful on the M8A7. The nature of the weapon's recoil will kick the player's sights up towards the head, allowing for one less shot to kill at all ranges should any shot in the burst be a headshot.

Equipping the Long Barrel attachment, like on all other assault rifles except the KN-44, will double the M8A7's range, extending its four shot kill range to 75 meters; becuase the M8A7 is already a four round burst weapon, it's basically an instant kill weapon in nearly all cases, as most maps don't have sightlines over 50 meters.

It is a very powerful and effective gun, especially for a wall weapon. Due to its four round burst fire, it manages ammo extremely well and one can go without a Max Ammo for a good three to four rounds. It also has high damage, staying a one burst kill to the head up to round 18 without Double Tap 2.0.

When Pack-a-Punched, it becomes The Unspeakable, gaining Extended Mags, with 48 rounds in the magazine and 480 in reserve. The ammo count is very high and can last many rounds without the need of buying ammo. The M8A7 also gains a higher damage profile, one burst killing the zombies up to the later 30 rounds with Double Tap 2.0. It is a very solid gun to have and the only downside is the burst fire nature, which is slightly slower to take out hordes, but helps reserve ammo.

M8A7 vs The Unspeakable

The M8A7 in first person

Aiming down the sights of the M8A7 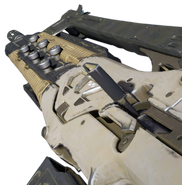 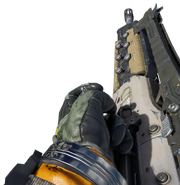 Chambering a round into the M8A7