For another variant, see Strela-P.
For similarly named arsenal, see SMAW and P.A.W.W.S.

The MAAWS (Multi-role Anti-Armor Weapon System) is a free-fire laser-guided rocket launcher featured in Call of Duty: Ghosts and Call of Duty: Advanced Warfare. In Ghosts it is also a 9-point (8 with Hardline) Support strike chain reward.

The MAAWS appears in the campaign once, in Brave New World, where it is used to shoot down an Mi-24 Hind and an EC-635 assaulting the Liberty Wall. Unlike its multiplayer and Extinction counterpart, each fired rocket remains intact instead of splitting into two others.

The MAAWS can be reloaded in campaign, but unlike other weapons, it is not automatically reloaded when empty. Thus, the reload button must be used.

The MAAWS appears in multiplayer. When fired, the rocket splits into two other rockets and can lock onto enemy aircraft and aerial pointsreaks (as well as the user's killstreaks). There is a Laser Sight attached to the weapon, allowing the user to manually guide the rockets to a designated target. When aiming with this weapon, instead of using sights, the player's view will zoom in slightly. The MAAWS can kill any juggernaut, even at full health, but it has to be a direct hit, or it won't do much damage.

The MAAWS appears as a Strike Package in the Extinction maps Mayday, Awakening and Exodus, replacing the Trinity Rocket from the other maps.

The MAAWS is a spiritual successor to the Trinity Rocket as a cheap explosive strike package that can launch multiple explosives in quick fashion, and can be upgraded to fire both smart projectiles and more rockets. By default, the MAAWS will fire a rocket that splits into two projectiles, just like it functions in Multiplayer. The MAAWS will deal considerable self-damage if fired close enough to the player's person, so it's best to not use the MAAWS in close quarters.

When upgraded sufficiently, the MAAWS' split projectiles will home in on nearby Cryptids should they fly in the air for long enough. The projectiles both need to fly a certain distance through the air before they can lock on, as well as there be Cryptids near the projectiles. For this reason, the MAAWS' consistency increases the longer the distance from the player to the target, as the MAAWS' homing capabilities need time to take effect, something that can't be done in close quarters engagements. Because of the nature of the smart projectiles, the MAAWS' usefulness depends on the area it's being used in. Most areas of Mayday are too cramped for the MAAWS to prove useful. However, Awakening and Exodus provide much more open space for the homing projectiles to work properly. It can also be beneficial to fire the MAAWS into the air, giving even more room for the MAAWS' rockets to properly redirect. Although the smart projectiles can lock onto a myriad of available targets, it is common for multiple projectiles to home onto one target, which is desirable for heavier targets, but undesirable for light targets.

The MAAWS is a very situational strike package. The smart projectiles need quite a bit of travelled distance for their homing effect to really be noticeable, and being explosive, the MAAWS' per-shot effectiveness depends on how many Cryptids are bunched together.

Upgrading the MAAWS is highly recommended for anyone who wants to make extensive use out of it, as like with the Trinity Rocket, the MAAWS' increased payload with upgrades will make the MAAWS as a whole more worthwhile relative to its price.

The MAAWS is at its best against medium-heavy targets such as Hunters, Seeders, and Phantoms, which have a moderate amount of health, and will die more easily to MAAWS explosions than a Rhino. The MAAWS' smart projectile properties also makes it extremely effective against far away Gargoyles and Ancestors, as the projectile(s) will be able to perfectly home in on these targets, and multiple projectiles homing in can cause enormous damage, if not outright killing the Gargoyle. The MAAWS is a solid choice for those that want an inexpensive strike package that can be used constantly, similarly to the I.M.S., as the MAAWS only costs $1300, making it among the cheapest strike packages available, and because the MAAWS is immediately discarded after the last shot is fired, the user can quickly purchase one again should they so choose.

The MAAWS compares best to the War Machine, another portable explosive launcher. The War Machine is significantly more expensive, can only fire one explosive per shot, and if upgraded, needs to go through a painfully slow reload. The MAAWS is a lot more disposable and provides more burst damage than the War Machine, as well as providing the ability to home in on Cryptids with sufficient upgrades, as well as being able to home in on multiple different Cryptids, even those that are very far away. However, the MAAWS pays for increased portability, reduced price, and higher burst damage by having significantly less sustained combat capability than the War Machine, which comes with twelve explosives total when fully upgraded, whereas the MAAWS can carry only a quarter of that amount with a full set of upgrades.

The MAAWS Launcher with a laser sight

MAAWS as it appears in Brave New World. Note that it is loaded with a Panzerfaust warhead.

The MAAWS returns in Call of Duty: Advanced Warfare, and is available in multiplayer. Once again it is laser-guided, but now it holds only one rocket, and must be aimed by using a reflex sight present on the launcher's left side.

The MAAWS rocket moves the slowest out of all launchers, and will only be guided while aiming down the sights. The rocket can be guided by any sights, meaning the player may switch to their primary and continue to guide the rocket. The guiding does not need to be continuous; the player may put down the sights, and then bring them back up to guide the rocket again. A rocket can still be guided after dying and respawning, so long as it is still in range. The rocket does not actually move in the direction that the user is pointing it in, but rather finds the most direct path to the target, even if it means turning around completely. One method is to fire the rocket into the air, letting it hang, then aiming at a target. The rocket will then redirect and strike from an unsuspecting angle, similar to the Javelin.

To destroy moving aircraft such as a UAV or a Paladin, fire the MAAWS well ahead of the target, let it hang for a few seconds, then aim at the aircraft. The rocket will will swing around from the front of the vehicle and strike from behind; the rocket moves only slightly faster than UAVs, so guiding it from behind takes much longer and is riskier. Using a primary weapon's sights to guide the rocket for distant targets may be beneficial for some players, as the MAAWS's sights lack a reticule, and may accidentally slip off target without the user noticing.

Since Scavenger does not give extra starting ammo for the MAAWS nor does it resupply it, the only way to get reserve ammunition for it is to pick up another MAAWS from the ground. Like in the campaign of Call of Duty: Ghosts, the reload button must be manually used.

The MAAWS was added to Exo Survival in an update. It is unlocked at round 6.

The MAAWS is a decent weapon for taking on enemy Warbirds due to it being laser-guided, but is not as good at taking on infrantry and drones. By the time it is unlocked, it usually takes at least two shots to kill one soldier (except in earlier rounds when the map is flipped). This, combined with its low magazine size, reserve ammo, and slow rocket propulsion speed, make it a bad weapon to use as a primary weapon. As well, it isn't as good as the Stinger M7 against Warbirds because the Stinger can lock on to the Warbirds. Plus, the Stinger M7 can lock on to enemy drones, while trying to guide the missiles towards drones with the MAAWS is extremely hard due to the small size of the drones. Overall though, it is a decent weapon to use against Warbirds until the player unlocks the Stinger M7, in which it may be a good idea to switch over to that.

The MAAWS in first person 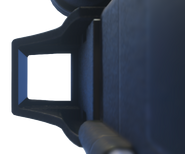