For another variant, see MAC11.

The MAC-10 was originally supposed to appear in Call of Duty 4: Modern Warfare, but was cut during production, replaced by Mini-Uzi. It is referenced by a string confirming this weapon in the Mod Tools. It can be used via console commands where it has a 30 round magazine and a very high rate of fire.[citation needed]

Insurgents
The MAC-10 is one of the three SMGs available in Call of Duty 4: Modern Warfare (Nintendo DS), with the other two being the MP5 and the Mini-Uzi. Along with all other weapons in the game, the MAC-10 has no recoil and idle sway when aiming down the sights. The MAC-10 holds 40 rounds in multiplayer and 30 round in singleplayer, and has an extremely high rate of fire but lacks in stopping power, taking several shots to take down a single enemy, though it is compensated for by the viciously high rate of fire. The game files refer to it as a MAC-11.

In the campaign, the MAC-10 has a 30 round stick mag the MAC-10 is used quite often by enemy forces in the SAS missions, but it is not found in USMC missions until "Missile Away". It is not used as often as the Mini-Uzi.

The MAC-10 has a 40-round magazine but less backup magazines. It is very useful on all maps, due to its high rate of fire and excellent accuracy when aiming down the sights. Its only competitors are the M1014 at close range, and the M40A3 and Dragunov at long range.

The MAC-10 appears returns Call of Duty: Black Ops (Nintendo DS); however, the name is abbreviated to M10. It has a 30 round magazine, is fully automatic, and can be fitted with a suppressor. It is often found as a hidden weapon in the campaign levels.

The M10 can also be found in the Mystery Box in the Zombie Mode, but never with the suppressor. 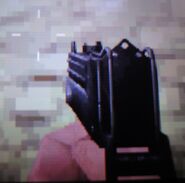 British S.F.S.G, National Guard
The M10 returns in Call of Duty: Modern Warfare 3: Defiance. It is identical to the one in Call of Duty: Black Ops (DS) in both stats and aspect, except it now has recoil.

The British S.F.S.G are often equipped with the M10, it can also be found on top of ammo crates. It is also used by the National Guard in the level "Oil, Fire, and Ice".

The M10 is not initially unlocked and is unlocked with a total of 1000 kills in multiplayer. Despite having low-medium power, this is made up for its incredibly fast rate of fire, it usually takes a half or three quarters of its magazine to down an opponent. Its decent iron sights and nearly non-existent recoil also make this an effective weapon for long range. Its suppressed counterpart can be unlocked with 150 kills with the standard M10.

The M10 in first person

Automatic
The Mac-10 was added to Call of Duty: Modern Warfare Remastered via an update which introduced Operation Lion Strike, a collection of new content added to the game. on March 14th, 2017.

The Mac-10 kills in 4-5 shots depending on range. Stopping Power reduces this to a 3-4 hit kill. Fire rate is high, bested only slightly by the Mini Uzi. The Mac-10 sports very low recoil for such a high rate of fire, which can be further enhanced with Double Tap and Bandolier as a deadly combo. Experienced users can take on medium-long range battles competitively. For those who find the iron sights too obstructive, a Red Dot Sight is a great alternative. Steady Aim is not needed, due to the Mac-10's great hip spread and handling.

Overall, the Mac-10 is a well-balanced weapon, and a master of none. It is comparable to the Mini-Uzi, but with significantly less recoil, a slightly smaller magazine and a lower amount of muzzle flash.

The Mac-10 in first person 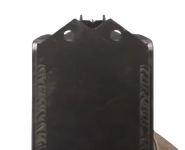 The MAC-10 returns in Call of Duty: Black Ops Cold War. It was added as part of the Season One content for the game.

The MAC-10 can be brought into any map via Create-A-Class, at Loadout rarity. It was added to the Mystery Box and Trials rewards pool as part of the Season Three: Reloaded update.

When upgraded via Pack-a-Punch Machine it becomes the Royale with Lead, gaining increased stats. 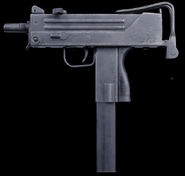 "A submachine gun with high rate of fire and superior mobility. Effective at close range."
— Description

The MAC-10 returns in Call of Duty: Mobile. It was added in March 2022 as part of the Season 3: Radical Raid update.

The MAC-10 is a definitive close-combat SMG. It sports a high firerate, going beyond the Fennec, also sporting higher damage. However, the trade offs are less accuracy at range, high recoil, and lower damage multipliers on lower parts of the body. Despite all of these trade-offs, it sports one of the best TTKs in CQC.

It has a unique array of attachments compared to most weapons. Most grips affect mobility in some way, and barrels affect the performance of the gun in various ways. The stocks and rear grips primarily affect mobility, with stocks affecting accuracy.

In terms of magazine attachments, it has a fast reload, an extended magazine (and a hybrid magazine with the same ammunition count), and an even larger magazine. The 43 round fast magazine is a well-rounded choice for general gameplay, providing a speedier reload and a decent magazine expansion, though ADS time is slowed along with movement. The fast reload provides the speedier reload at no extra downside or upside. The 53 round magazine gives a generous magazine increase at the cost of a slower reload, movement, and ADS. However, these penalties prove neglible, as the MAC-10 has a fast base reload, though empty reloads do take a marginally longer time to perform.

The MAC-10 is a king of close quarters, directly competing with the Fennec (if not surpassing it,) but has high recoil and low bullet accuracy to boot. However, the weapon is viable in close-to-mid-range if kitted out and used properly.