The MAS 36 is a French bolt-action rifle featured in Call of Duty 2: Big Red One and Call of Duty: WWII.

The MAS 36 (referred to as MAS36 Rifle in the HUD) is a rifle only available during the mission "Baptism By Fire" in the hands of Vichy French forces. Like other bolt-action rifles in the game, it is quite powerful: it will kill in a single shot from a hit to the chest upwards. It excels at long, and to a certain extent, medium range, but, it is tough to use in close quarters, especially when up against submachine guns. Thus, it is advisable that the player also carry the very common MAS 38 with them. Its iron sights consist of a rear aperture sight aligned with a three-pronged frontal piece, quite similar to the Lee-Enfield in other Call of Duty titles. 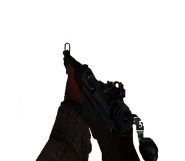 The MAS 36 in first person 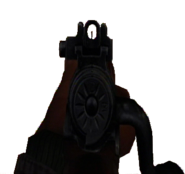 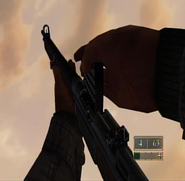 "Bolt-action sniper rifle that offers a one shot kill from the torso and up."
— Description

The M36 can be obtained from the Mystery Box in all maps for 1,000 Jolts and from the Sniper Rifle Waffenboxes in The Tortured Path for 3,000 Jolts. When upgraded by the Ubersprengen or by the Freefire perk "MKII" it becomes the Finer Things gaining an increased reserve maximum ammo of 120 and increased damage.