The MAS 38 is a French submachine gun featured in Call of Duty 2: Big Red One and Call of Duty: WWII.

"This French submachine gun has a distinctive bent look to it for a more compact design. 7.65mm caliber 32-round clip. 650 rounds per minute."
— Bonus Materials Weapons description.

The MAS 38 (referred to as MAS38 SMG in the HUD) is available during the mission Baptism By Fire in the hands of Vichy French forces. It has 32 rounds per magazine, deals high damage, and unlike other submachine guns, has virtually no recoil, along with very clear iron sights. It takes 2-3 shots to kill at close range, and 4-5 shots at long range. It is a good idea to use this weapon in the level, for ammunition is very abundant. It excels in close quarters, making it useful for clearing buildings.

The MAS 38 in first person 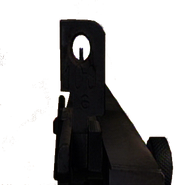 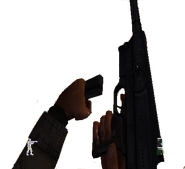 "Automatic SMG with a large magazine and modest damage. Fastest aim down sight in class."
— Description

The MAS 38, referred to as M-38, was added to Call of Duty: WWII with the Operation Shamrock & Awe event.

The M-38 is available from the Mystery Box in all maps for 1,000 Jolts and from the Submachine gun Waffenbox in The Tortured Path for 2,000 Jolts. When upgraded either by the Ubersprengen or via the Freefire perk "MK. II" it becomes the Corpse King gaining an increased base magazine size of 75 and increased base maximum reserve ammo of 775 along with increased damage.

The M-38 in first person

Promo of the M-38 and the MG 81
Community content is available under CC-BY-SA unless otherwise noted.
Advertisement