For a submachine gun with a similar name, see MPL.

The MDL (Micro Drone Launcher[1]) is a multi-shot grenade launcher that appears in Call of Duty: Advanced Warfare.

Most versions of the MDL in the campaign fire contact grenades, except for the missions "Induction" and "Crash", where they fire smart grenades instead. However, contact grenades still home on enemies at long ranges when aiming around them. Often times when the MDL is found, it is highlighted on the HUD but is not required to be used.

It holds four shots and, unlike most grenade launchers in the series, contact grenades don't have a safe distance, which means the player can harm themselves with the explosions. The MDL can be used to earn upgrade points through the "Grenade Kills" challenge in campaign.

In multiplayer, it appears as a primary weapon, under the Specials category. It fires timed frag grenades and holds six shots before having to be reloaded one round at a time, but it is possible to halt the reload and fire after reloading at least one grenade.

The MDL is very useful in objective game modes where enemies are usually clustered in predictable locations, able to be bombarded with grenades. An explosion directly next to an enemy will kill them in most cases, though it is advised to fire at least two shots rapidly in case the first grenade only injures the enemy. The MDL becomes even deadlier in Hardcore modes due to the lack of grenade indicators. A single explosion will usually kill an enemy no matter how far they are from the explosion (excluding Flak Jacket users). However, MDL users are also at risk of team killing if they are not careful.

They only have cosmetic differences, except for the Royalty variant, which gets a faster reload (1.25 s for the first grenade, 0.583 s for each additional grenade, and 0.75 s at the end).

It appears in Exo Survival, where it is bought from the Launchers (after an update) section instead of Specials. It is unlocked from the start, and fires grenades that explode on impact like in the campaign. It is given to the Demolition class from the start and is given to Launchers (enemies), who have ones that work like the MDL in multiplayer instead.

It is a good weapon in the early rounds for the player to use, as it is a one-shot kill to the early enemies due to it being an explosive gun. However, once it starts taking several shots, it may be a good idea to trade it in since it also has a low reserve ammo capacity (as well as a slow reload), or keep it to use as a "secondary" for when there are lots of enemies.

It is next to impossible, if not truly impossible, to hit Warbirds with shots from the MDL, making a rocket launcher a better choice if wanting something to use against Warbirds. Overall, it is statistically better as a backup weapon in later rounds for players who want something to take out groups of enemies with and are willing to sacrifice the ability to take down a Warbird with one of the other launchers.

Render of the MDL's model

The MDL in first person 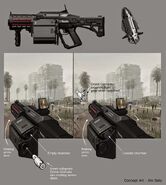