For the assault rifle variants, see G36C and G37H.

"The MG36 provides excellent station suppressive fire, dealing high damage at long ranges with a fast firing rate. Mobility is sluggish, and accuracy is merely decent, but manageable recoil keeps your sights on the target for easier acquisition. Let the enemy come to you and mow them down on sight."
— Call of Duty: Elite description

The MG36 appears in the mission "Persona Non Grata" with a Grip, found on the ground as soon the player takes control of Yuri. It appears somewhat differently from its multiplayer version, as it has a considerably smaller magazine, lower rate of fire, lower recoil, and decreased reload add time (meaning the magazine is refilled when the new magazine is about to be inserted to the weapon), making it effective for reload cancelling. However, it can run out of ammo rather quickly, depending on how much the player uses it.

The MG36's rate of fire is average, at 769 RPM. This is middle of the road as far as LMGs are concerned.

The MG36's accuracy is awful, among the worst in the LMG tier. The iron sights are a bit thick and can obstruct vision, but are otherwise serviceable. The MG36 has moderate upwards kick, but extremely strong horizontal kick in both directions. The MG36 will lurch from side to side extremely frequently and quite heavily. Compounding the accuracy woes is the worst centerspeed in the LMG class, at 1500. The MG36's recoil profile is quite similar to that on the M60E4, but that weapon shoots at a much lower rate of fire to compensate. The MG36 has a nasty combination of heavy recoil, a pedestrian centerspeed value, and lacking a slow fire rate to compensate.

The MG36 has above average handling characteristics for an LMG, but is sluggish overall. The user moves at a sluggish 80% of the base movement speed, strafes at 32% of the base speed, and the hip-fire crosshairs are large. The MG36 has a slightly faster aim down sight time than most other LMGs, aiming in 380 milliseconds. The MG36 also has a much faster reload than most LMGs, seeing how it feeds from a drum magazine instead of a belt. The MG36's reload animation takes 3.73 seconds if the drum is not empty, or 4.53 seconds if the drum is fully empty. In either case, the Reload Cancel can be done at the 4 second mark. This reload cancel speed is good overall among LMGs, but relative to the MG36's reload animations, is extremely poor. The MG36 has a noticeable delay between the partial reload animation ending and the ammunition entering the weapon, and as such, those who tend to reload cancel can find themselves reload canceling too early with the MG36. This delay isn't as apparent when performing an empty reload.

The MG36 has the standard LMG capacity of 100 rounds. The MG36 by default gets one drum in reserve, giving a starting ammo loadout of 200 rounds.

The MG36 has the standard assortment of attachments and weapon proficiencies on offer.

kick is available very early, and can be very valuable on the MG36 as a means to reduce recoil, reducing the MG36's heavy recoil values by ten percent in all directions. Kick's value on LMGs is severely overshadowed by the Grip, which also reduces the recoil values by ten percent, but also confers a huge centerspeed increase. It wouldn't be a bad idea to mix both the Kick proficiency and the Grip together, as when using just one or the other of these options, the MG36's horizontal recoil, while reduced, is still very large, and combining the two bring the MG36's horizontal recoil values just low enough to be tolerable for most.

Impact increases the MG36's penetration power even further, allowing the MG36 to shoot through the vast majority of surfaces in the game. With Impact, the MG36 can shred through cover, but there's ultimately better proficiencies on fofer.

Focus reduces the flinch per shot the user suffers by fifty percent. This is a solid proficiency option, as it allows the user to be much more consistent when under fire. If the user is content with one attachment option, this is a great way to bolster perfornmance at medium to long range combat.

Stability reduces both the idle sway amount and the idle sway speed of the MG36 by ten percent. While it is true that idle sway for LMGs is much larger in Modern Warfare 3 than it was in previous games, there are simply better proficiency options for the MG36.

The Silencer reduces muzzle flash, makes the weapon much quieter when firing, and the user will no longer appear on radar when firing the MG36. The MG36 suffers no weakness from using this attachment, as the MG36 does the same damage per bullet at all ranges. The Silencer is one of the strongest attachment options available on the MG36 as a result.

The Grip is far and away the best attachment option on the MG36. The Grip will reduce the enormous recoil per shot by ten percent, and the MG36's centerspeed gets increased significantly to 1875. These two effects make the MG36's recoil significantly easier to manage as a result. Easily the MG36's biggest weakness as an LMG is its large recoil profile, and the Grip directly ameliorates both of the MG36's accuracy issues. Even with the Grip, however, the MG36's horizontal recoil values will remain larger than all LMGs except the M60E4. While the Grip monumentally improves the MG36's accuracy, it doesn't make the MG36 pinpoint precise by any means.

Rapid Fire increases the MG36's rate of fire to 922 RPM. This makes the MG36 much more lethal, but it will give an indirect increase to recoil. As a result, Rapid Fire is an ill fit on the MG36.

Due to a recent update, all light machine guns kill in a minimum of three shots against a normal opponent unless shooting through cover, Therefore, the only negative aspect about using a Silencer with this gun is the opportunity cost of not using another attachment.

The MG36 is available in Survival Mode at level 48 and costs $7000. It is an effective weapon, with good damage, a large magazine, decent rate of fire, and a rather fast reload for light machine guns, which makes it probably the best choice of any LMG to purchase. The player should beware when adding the grip attachment to the MG36, as it will lower its rate of fire.

First person view of the MG36 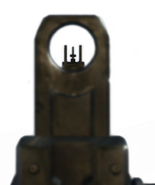 Removing the empty magazine when reloading

The MG36 in third person

A Spetsnaz soldier with an MG36

100 rounds
(30 and 35 rounds with ammunition attachments)

Kill 30 enemies with an LMG while hip firing to unlock

"A versatile fully automatic 5.56mm light machine gun. Modular design can be configured for a broad range of engagements."
— Description

The weapon appears in Call of Duty: Mobile as the Holger 26. It was added in June 2021 as part of the Season 4: Spurned & Burned update.

The Holger 26 is a unique LMG, that directly clashes with the M4LMG in terms of modifiability. Both feature magazine conversions that increase ADS speed, and reload time, and both feature only one attachment that can increase range. However, where the M4LMG takes advantage of higher damage with less mobility and a lower fire-rate, the Holger makes use of consistent damage, with no multipliers to any part of the body other than the head, and a higher fire-rate in combination with higher mobility.

Players running the weapon with the magazine conversion can play with this gun as if it was an assault rifle, with slightly-below average mobility. In this role, it is quite viable, the consistent damage making it quite easy to use.

Of course, as an LMG, it also fairs well, despite not having an increased drum magazine like other belt-fed or drum-feds. Its consistent damage, high fire-rate, accuracy, recoil, and mobility allow players to hunker down and if needed, swap to various enemies charging down a lane fairly easily.

Despite not having the attractive damage output of other LMGs, the Holger sports high consistentcy, allowing for both aggressive play with magazine conversions, and excelling in the traditional post-up role of an LMG.

"A versatile fully automatic 5.56mm light machine gun. Modular design can be configured for a broad range of engagements."
— Description

The weapon appears in Call of Duty: Modern Warfare as the Holger-26. It was added as part of the Season One content for the game. It is manufactured by FORGE TAC.

The Holger-26 in first person.

The default Iron Sights of the Holger-26.