The MG4 is a rare weapon that only appears in the Task Force 141 campaign. It is seen being used by Shadow Company in "Just Like Old Times", and can be found and used in "The Only Easy Day... Was Yesterday", "The Gulag" and "Contingency". It has a lower rate of fire than its multiplayer counterpart and can only hold a maximum of 200 rounds spare. For these reasons, other weapons are usually better alternatives. It never appears with any attachments.

The MG4 is unlocked at level 16, making it the third LMG available. It is a three shot kill with Stopping Power; a four shot kill without. It has a moderate rate of fire with low recoil. It has the lowest damage per second out of the light machine guns and its iron sights are slightly misaligned. The MG4 also still appears on the radar when equipped with a silencer and fired, a trait also seen on the M9 and M240. For these reasons, it is one of the least used and most underestimated light machine guns in Call of Duty: Modern Warfare 2.

The MG4 can, however, be a very effective weapon. The low recoil means that it is effective when fired full auto even without the Grip. Without a grip, it is about as accurate as the M4A1. Otherwise, when used with a Grip, it is essentially an LMG version of the ACR, with no damage loss over range, larger magazines, a slightly higher rate of fire, and the slower handling of an LMG. Even with the ACOG, this weapon can be fired full auto with minimal loss of accuracy. These qualities mean the MG4 is outclassed at short and medium range. It excels at longer range battles, where accuracy regularly trumps power.

Since LMGs have no damage drop off with range, the MG4 will kill in as many bullets as one of the higher damage assault rifles (the SCAR-H or the TAR-21 for example, with or without Stopping Power) but it has lower recoil with a Grip, and has a higher rate of fire than both of those weapons. Using a silencer - with or without Stopping Power, is extremely ill-advised, as it will decrease the damage of the MG4 at all ranges, and due to a glitch, will not conceal the player's position on the radar.

Since it has almost as little recoil as the ACR, the MG4 actually can be much more useful at long range because of its higher damage at longer ranges and its slightly higher rate of fire, along with the 100 round capacity.

Unfortunately, the MG4's iron sights are misaligned. The true point of impact is somewhere near the bottom of the central post. This problem is easily solved through the use of any optic besides the iron sights. Most players consider Bling with Grip and a Red Dot Sight, Holographic Sight, or ACOG. The Thermal Scope can be surprisingly effective on certain maps such as Underpass, Estate, or Wasteland as the recoil is still quite controllable.

Many players may be bothered by its slow reload (as it is tied with the RPD as the slowest in the game) of 9.7 seconds, but there are a few options to mitigate it. Sleight of Hand is one of the obvious perks to counteract the slow reload, also the benefit from Sleight of Hand Pro decreases the time to aim down the sight. One Man Army is actually faster than reloading the MG4 with the added benefit of replenishing ammo and equipment. Using the Extended Mags attachment for the weapon is another viable solution; giving the MG4 all 200 rounds in one large magazine and thus no reload.

Something of note is that when FMJ is equipped with the weapon, the title for the weapon reads "MG4 Explosive Rounds". This does not grant the weapon any extra damage, nor does it grant it any splash damage, FMJ with the MG4 behaves like FMJ on any other weapon; it's just labelled incorrectly.

The MG4 in first person.

The MG4 in third person.

SAS, Coalition
The MG4 appears in Call of Duty: Modern Warfare: Mobilized as one of the two LMGs in-game. The MG4 shares the same basic appearance as its Call of Duty: Modern Warfare 2 counterpart, but the ammunition is stored in a box as opposed to a cloth bag. The MG4 has a higher rate of fire, as well as a higher damage per bullet. The MG4 is only used by the Insurgency in the levels "Interception", "Needle in a Haystack", "To the Rig", "Winter Assault", and "Last Chance".

The MG4 viewed from third-person.

The MG4 in first person.

The MG4 was cut from Call of Duty: Modern Warfare 3. Its textures however, can be found in the game's files. 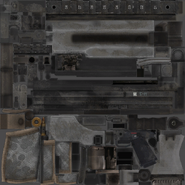 The MG4 returns in Call of Duty: Modern Warfare 3: Defiance. It has the same model and stats (except it now has recoil) of Mobilized, but when aiming down sights all the weapon turns into an M249 SAW strangely. In Gun Game, the MG4 is the eighteenth weapon tier.

First person view of the MG4.

Automatic
The MG4 returns in Call of Duty Online as the MAG43.

The MAG43 in first person

The MAG43's HUD icon in the middle of the screen

The weapon equipped with a Bipod Grip