Call of Duty Wiki
Register
Don't have an account?
Sign In
Advertisement
in: Call of Duty: WWII Light Machine Guns

The MG 15 is a fully-automatic light machine gun featured in Call of Duty: WWII.

The MG 15 is the standard light machine gun for the Wehrmacht in the campaign. Unlike its multiplayer variant, it has 75 rounds by default.

The MG15 is a low damage LMG, dealing 30-22 damage. It has very high range however, making it a four-shot kill in practically all circumstances. Rate of fire is high at 722 RPM. This is higher than most rifles and on par with some of the submachine guns, granting the MG15 surprising lethality in close quarters, but out to much farther ranges than its competitors.

Accuracy is a mixed bag, but is overall not bad. The MG15 has very strange iron sights; a large anti-aircraft sight with a wireframe crosshair. It is somewhat obtrusive, but can be very accurate with practice. Recoil is low-moderate, no problem at closer ranges, but may hinder long range performance where one should control their recoil by burst-firing or pulling against it.

Handling is an area where the MG15 has suprising performance. It has a faster sprint-out time than the other LMGs, on par with rifles, a unique strength making the MG15 less risky to sprint with than its peers. ADS time is class standard. The true strength of the MG15 is its incredibly tight hipfire spread, on par with SMGs, and far above any other LMG or even some rifles, allowing the user to stay mobile.

Attachments are an objective choice, but the MG15 has unusual strength in close quarters, and appealing to this with the right attachments can produce a deadly combination. Optics are not absolutely necessary; as strange as the MG15's iron sights are, they are be very accurate. Extended Mags is a good choice, increasing the capacity from 50 to a loftier 75. Grip improves the MG15's already solid accuracy, although it may not be that necessary. Steady Aim is a very strong choice, further tightening the spread for an incredible weapon when firing from the hip. Full Metal Jacket is a good choice in the War Mode, where the MG 15 can make short work of enemies making use of cover. Quickdraw is useful if the player wishes to take advantage of the MG 15's good recoil to take out ranged enemies. If the player has the time and right position, deploying the Bipod turns the MG 15 into a powerhouse, granting a higher rate of fire, reducing the already moderate recoil and allowing the MG 15 to feed rounds from its reserve, allowing sustained fire without reloading.

The MG 15 can be obtained from the Mystery Box in The Final Reich, Gröesten Haus, The Darkest Shore and The Shadowed Throne for 1000 Jolts. The MG 15 can be found in The Tortured Path in the Light Machine Gun Waffenbox for 4250 Jolts.

Damage is good, requiring very few shots to kill zombies, even past wave 20. Rate of fire is the best in class tied with the GPMG, allowing for good close range damage output. Ammunition is generous, with 50 rounds in the magazine being able to handle a group of zombies easily, but reloads take a few seconds during which time the player should be wary of their surroundings. As with its Multiplayer iteration, the MG 15 has the best handling statistics of all the LMGs, allowing the player to utilize a mobile playstyle.

When upgraded via the Ubersprengen, it becomes the Prop Shredder, having increased damage and a larger magazine (75 rounds) with more ammunition and gains the ability to spawn a forcefield around the player if they spend all bullets in the current magazine. The Prop Shredder has higher mobility when firing as compared to the base version. If the player uses the Stormraven mod "Gung Ho!", the player will maintain their sprint speed whilst firing while sprinting. The Prop Shredder remains effective even after wave 30. The high damage and fire rate also allows the player to engage boss zombies such as the Wüstling, Brenner, and Meuchler effectively. 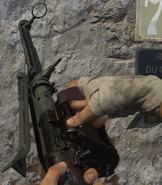 Inspecting a side of the MG 15.

Inspecting another side of the MG 15.

The MG 15 equipped with an Extended Mag.
Community content is available under CC-BY-SA unless otherwise noted.
Advertisement